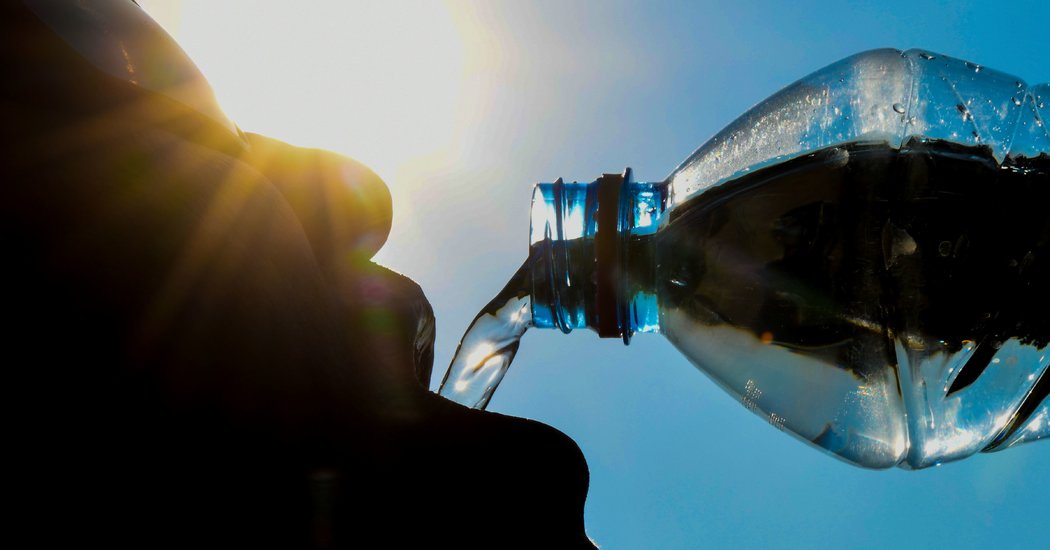 The announcement, which was made on Friday, came three days after the Center for Environmental Health notified the company that tests showed arsenic levels exceeding those set by the federal government, and two months after Consumer Reports found similarly high levels.

A market withdrawal is voluntary and “occurs when a product has a minor violation that would not be subject to FDA legal action,” according to the United States Food and Drug Administration’s website.

Katie Gilroy, a company spokeswoman, did not disclose how many bottles would be affected by the withdrawal but said the products, which are imported from Mexico, were “sold in a limited number of retailers” in the United States.

Ms. Gilroy said production was suspended in April and enhanced filtration systems were installed. The company said none of its other products were affected by the withdrawal.

Consumer Reports and the Center for Environmental Health, which is based in Oakland, Calif., said another brand, Starkey Water, which is owned by Whole Foods, contained arsenic levels that met federal standards but exceeded levels they deemed safe. Consumer Reports said the levels were eight parts per billion.

A spokeswoman for Whole Foods declined to comment on Sunday about the center’s testing but said the products tested by Consumer Reports were “fully compliant with F.D.A. standards for heavy metals.”

What’s the danger of arsenic in water and how is regulated? Here’s what you need to know:

What is arsenic and how common is it?

Chronic low-dose exposure to arsenic has been implicated in respiratory problems in children and adults and in cardiovascular disease, diabetes and cancers of the skin, bladder and lung.

Studies have also shown it can be harmful to developing fetuses and children, and negatively affect cognitive development, intelligence and memory, according to the World Health Organization.

Arsenic is a heavy metal found in the Earth’s crust and ubiquitous in the environment, according to the National Institute of Environmental Health Sciences.

Because it can leach into groundwater through rocks in soil, contaminated drinking water is the most common way humans can ingest it. But it can also be found in certain foods, such as rice.

What are considered ‘acceptable’ levels of arsenic?

Consumer Reports said there should be more consistent oversight of the bottled water industry.

“If anything, bottled water — a product for which people pay a premium, often because they assume it’s safer — should be regulated at least as strictly as tap water,” Consumer Reports’ chief scientific officer, James Dickerson, said in its report.

Consumer Reports also said the federal threshold should be lowered to three parts per billion. Erik D. Olson, a drinking water expert at the Natural Resources Defense Council, agreed. “Since it is a carcinogen, there is no completely ‘safe’ level of arsenic,” he said.

The F.D.A. did not respond to a request for a comment on Monday.

The International Bottled Water Association said the findings by Consumer Reports “unnecessarily” scared consumers about the safety of bottled water.

“Bottled water, like all food and beverages, is strictly regulated” by the F.D.A., an association spokeswoman, Jill Culora, said. And experts who work for the agency “have concluded that — based on the best available science — the current 10 ppb standard for arsenic in bottled water protects the public health,” she said.

How is bottled water regulated?

Can consumers test for arsenic in their water?

Mr. Olson said no over-the-counter kits are reliable for testing for arsenic. The Natural Resources Defense Council recommends using a state-certified drinking water lab; a list is on the E.P.A.’s website.

Some labs, like mytapscore.com, will do a test at a reasonable price, Mr. Olson said. He suggested asking for only an arsenic test, which will cost less.

How can I tell if my bottled water is safe?

“Basically, the consumer cannot tell,” Mr. Olson said. “Most contaminants of concern like arsenic are not visible and cannot be tasted or smelled.”

There are no public databases of bottled water quality information. Some companies publish test results on their websites, or include a telephone number or email address on labels, where consumers can request detailed test data.

Mr. Olson said that many bottlers will not provide comprehensive data, however.

“We have argued that there’s a need for a right-to-know law for bottled water requiring full disclosure of test results, including any problem results, on the bottle,” he said. “Tap water systems are required to do an annual report to their consumers of their test results. Why not bottlers?”