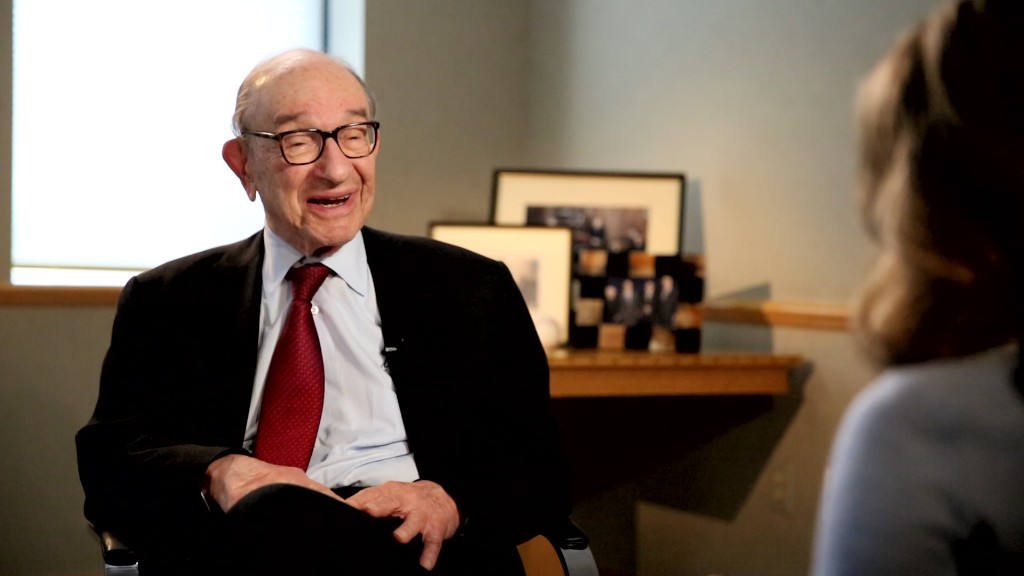 Alan Greenspan has a message for President Trump and Congress: Now is not the time for big tax cuts.

Greenspan, the former Federal Reserve chief and Republican economic adviser, is worried about how tax cuts will worsen America’s mountain of debt.

“We are premature on fiscal stimulus, whether it’s tax cuts or expenditure increases. We’ve got to get the debt stabilized before we can even think of those terms,” Greenspan said.

That stands in stark contrast to the urgent pleas for lower taxes by Trump, who during the campaign dubbed himself the “king of debt.” Trump argues the American economy “desperately” needs “massive” tax cuts.

That’s despite accelerating economic growth and the lowest unemployment rate in 17 years. The White House has said tax cuts are needed to keep the momentum going and improve wage growth, which remains disappointing.

Greenspan, who was appointed Fed chair by both Republican and Democratic presidents, argues the United States is already at “full employment.” He predicted supply and demand for labor will cause wages to “accelerate” on their own.

Rather than adding to the national debt, Greenspan says Congress needs to put the country on a sustainable fiscal path.

“What we ought to be concerned about is the fact that the federal debt is rising at a very rapid pace. There is nothing in this bill that will essentially stop that from happening,” Greenspan told Fox Business.

When he led the Fed, Greenspan’s words were treated like gospel by economists and investors alike, and the press dubbed him the Maestro. But critics have since argued Greenspan’s support for light regulation and low interest rates contributed to the 2008 financial crisis.

Still, neutral observers agree that the House GOP tax bill would make the national debt worse. The nonpartisan Congressional Budget Office estimates the federal deficit would increase by $1.7 trillion over 10 years under the plan, including the impact of higher borrowing costs.

Under the tax bill, the CBO expects debt held by the public would rise to 97.1% of gross domestic product by 2027, compared with 91.2% under the existing tax structure. Debt-to-GDP currently stands at about 75%.

The House GOP bill would permanently cut the corporate tax rate to 20% from 35%, consolidate income tax brackets for individuals from seven to four and repeal or limit many deductions. The Senate tax bill would change the rate on taxable income for some of the seven individual tax brackets. It would also slash the corporate rate to 20%, but the cut wouldn’t take effect until 2019.

The White House argues that these changes will speed up the economy enough that they’ll pay for themselves in the long run.

“We see the whole trickle-down through the economy, and that’s good for the economy,” Gary Cohn, Trump’s top economic adviser, told CNBC.

Greenspan generally supports the idea of a 20% corporate tax rate to make the United States more competitive with lower-tax countries.

“It’s probably wise to bring down the corporate rate,” Greenspan said. “But don’t look to that as a major factor in expanding the economy.”

–CNN’s Jeanne Sahadi and Phil Mattingly contributed to this report.