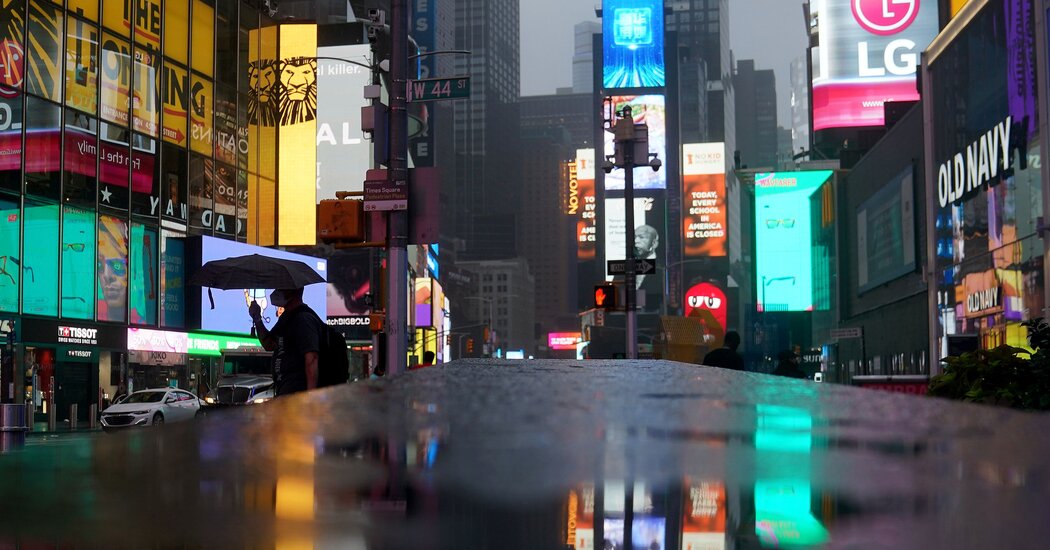 Jeremy Male is an executive in a branch of the advertising business — billboards — that took a huge hit in the spring. So he was heartened by what he saw this week on his commute from Greenwich, Conn., to his office in Manhattan.

Through the windows of the Metro North train and on his walk from Grand Central Terminal to the Chrysler Building, Mr. Male saw ads, ads, ads.

He is the chief executive of Outfront Media, a company that sells space on more than 500,000 billboards and other platforms in North America, including the sides of buses and the interiors of subway cars. And like other companies that specialize in so-called out-of-home display ads, Outfront Media has been hurt by the pandemic.

In an earnings report on Wednesday, Mr. Male said Outfront Media’s overall revenue for the second quarter of 2020, a three-month period of pandemic-related lockdowns across the United States, had declined nearly 50 percent from a year earlier.

It was a similar story for Clear Channel Outdoor, which sells space in 31 countries. On Friday the company said that its overall revenue fell nearly 55 percent during the same period. It was even worse for the advertising firm JCDecaux, which has more than 1 million promotional panels worldwide. Its advertising revenue sank nearly 66 percent.

Before worldwide lockdowns went into effect, out-of-home advertising was embracing digital innovation and growing faster than many other parts of the industry. But when the virus hit, budget-strapped companies scaled back how much they spent on marketing in general — and they were especially wary of buying ad space in shopping centers and along travel routes that fewer people were around to see.

To help them through the crisis, many billboard companies took out loans and renegotiated contracts with airports and public transit organizations, and members of JCDecaux’s board cut their compensation for the year by 25 percent.

A second wave of Covid-19 cases has disrupted reopening efforts, sparking renewed discussion about the future of urban living. But during a conference call with analysts this week, Mr. Male, of Outfront Media, said the return of out-of-home ads in New York suggested that cities “are going to be hugely relevant,” even after the pandemic. And that will be good for his part of the ad business: New York and Los Angeles represent 40 percent of Outfront Media’s revenues.

Advertising executives said this week that the worst may be over, as more people return to work or go on road trips. But any recovery will be gradual: Outfront Media expects billboard revenue to decline 25 percent during the third quarter, in comparison with the same period last year (after a second-quarter drop of 38 percent) while also forecasting that its revenue from transit ads will fall 65 percent.

Based partly on his observations, Mr. Male said that young people, a prime target for advertisers, would continue to flock to urban areas. “They ain’t going to be out in Westchester,” he said. “They’re going to want to be here in the city.”