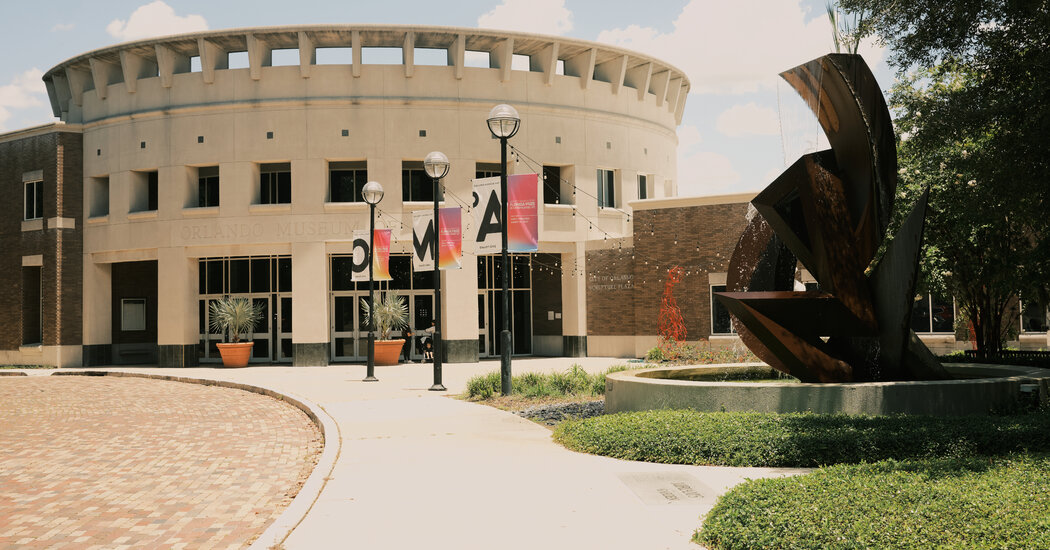 ORLANDO, FLA. — The Orlando Museum of Art no longer resembles the active crime scene it was in June, when agents from the Federal Bureau of Investigation’s Art Crime Team raided the museum and seized its marquee exhibition: 25 paintings attributed to Jean-Michel Basquiat but whose authenticity was questioned in an F.B.I. affidavit that detailed a nine-year-long criminal investigation into the artworks.

A television news helicopter no longer buzzes overhead while broadcasters in the sun-baked parking lot muse about the fate of the paintings and their owners, who marketed them to prospective buyers as having an appraised value of $100 million.

Now the museum is hoping to get beyond its role at the center of a headline-grabbing art scandal, and is trying to reassure the public, the art world, local officials, donors and its own staff that it still has a culturally vital role to play in serving the community.

It is not going to be easy.

The museum has canceled the next three exhibitions planned by its former director, Aaron De Groft, who brought in the Basquiat show and who was fired by the board of trustees just four days after the F.B.I. pulled the disputed Basquiats off its walls.

The Basquiat exhibition has been scrubbed from the museum’s website; boxes of the show’s 163-page catalog, as well as piles of museum-branded Basquiat merchandise, have all been carted from the gift shop into the museum’s basement, according to several employees with knowledge of the move.

While the F.B.I.’s affidavit cited evidence pointing to possible crimes of conspiracy and wire fraud, it has not filed any charges in the case.

But the philanthropic ground is already shaking. A half dozen prominent OMA donors are in discussions to shift their financial support to the Rollins Museum of Art, at nearby Rollins College, according to its director, Ena Heller. And one of Orlando’s largest charitable organizations, the Martin Andersen-Gracia Andersen Foundation, told The New York Times that it will move its collection of 18th and 19th century American paintings — including works by Robert Henri and John Singer Sargent — from OMA, where they had been on loan for nearly 30 years, to the Rollins. Six of the 22 paintings in the collection will be donated to the Rollins outright.

The foundation’s chairman, president and chief executive, T. Picton Warlow IV, did not allude to the recent controversy, saying only that the Rollins shared his foundation’s educational mission and a desire to reach “a more diverse audience of art enthusiasts in our community.”

Some members of the city’s arts communities — Heller among them — are now publicly calling for the resignation of Cynthia Brumback, the chairwoman of OMA’s board. “This did not begin and end with Aaron De Groft,” Heller said. “He reported to a board that has oversight, that has fiduciary responsibility for that museum.”

Heller cited the F.B.I.’s subpoena sent to OMA on July 27, 2021 — nearly seven months before the exhibition opened — demanding “any and all” communications among the museum’s employees, its board and the owners of the artworks. “There’s a reckoning that ought to happen there,” the director said. “What happened at the Orlando Museum of Art has put us all back by many years. There are people in the community who are very angry. Rightly so.”

Brumback issued a statement after the F.B.I. raid saying that OMA was “extremely concerned about several issues” with the Basquiat exhibition and “we have launched an official process to address these matters.” Brumback did not respond to requests for comment.

De Groft maintained that the paintings were genuine Basquiats at an interview in July at his home here. The New York Times had raised questions about the authenticity of the paintings in February. One of the paintings was done on the back of a cardboard box with an instruction to “Align top of FedEx Shipping Label here.” The article noted that a graphic designer who worked for Federal Express said that the typeface on the label — one he had designed especially for the company — had not been used until several years after Basquiat’s death.

In the recent interview, De Groft insisted, “This all happened because you got the font wrong,” sounding more weary than angry as he continued to dispute the timeline of that Federal Express typeface. The F.B.I. also interviewed the graphic designer, noting in its affidavit that the typeface indicated that the painting could not have been done in 1982, as the owners of the artwork claimed.

De Groft said that new evidence would emerge that would vindicate him and he continued to assert that the paintings were recovered from the Los Angeles storage unit of the television screenwriter Thad Mumford, who De Groft said had bought them directly from Basquiat in 1982. (In its affidavit, the F.B.I. said it had interviewed Mumford, who told them that “at no time in the 1980s or at any other time did I meet with Jean-Michel Basquiat, and at no time did I acquire or purchase paintings by him.” )

As for the three canceled exhibitions, De Groft said those were all also without issues. But sources inside the museum, who spoke on condition of anonymity because they had been threatened with termination if they talked to the news media, said the F.B.I. raid had convinced trustees not to take any more risks.

One of the canceled shows would have focused on a large painting De Groft said was by Jackson Pollock; it is co-owned by the Los Angeles trial attorney Pierce O’Donnell, one of the co-owners of the purported Basquiats. The Pollock — which O’Donnell said he has also been trying to sell — remains unauthenticated by the artist’s estate, whose Pollock-Krasner Foundation ceased such evaluations in 1996. It is also specifically cited in the same F.B.I. subpoena sent to OMA in July 2021, demanding all private correspondence related to it.

The second canceled show was to feature a set of Michelangelo drawings, which several museum employees said had roused internal concerns regarding their proper attribution. The third canceled show was a traveling exhibition of artworks by the wildly popular British artist Banksy. It had been organized by a private for-profit company, and Banksy himself had disavowed it as one of several exploitations of his fame, writing on his website that it “might be crap so please don’t come to us for a refund.”

What remains on display on OMA’s walls doesn’t involve boldface names, but is no less impressive in its own right: its annual Florida Prize in Contemporary Art, a survey of statewide talent by the museum’s chief curator, Hansen Mulford, and associate curator Coralie Claeysen-Gleyzon. Still, this kind of support for Florida’s art ecosystem has been overshadowed by the Basquiat issue.

A sign of local impatience with OMA erupted last month when a large mural critical of the museum was wheatpasted onto a wall facing one of its main approaches. Created by one of Orlando’s best-known street artists, Halsi, it features his signature “Everyone” figure topped with one of Basquiat’s iconic crowns. On the figure’s left side is an image of De Groft; on its right side is a depiction of Jordana Moore Saggese, a University of Maryland art professor who, in the F.B.I. affidavit, said she was paid $60,000 by the Basquiat artworks’ owners in 2017 to assess the paintings.

The mural is a none too subtle riff on an email quoted in the F.B.I. affidavit that detailed Saggese’s qualms about the museum’s Basquiat exhibition. She contacted the museum as the show was opening this past February to ask that her name not be associated with it, at which point De Groft replied to her threatening to disclose the payment and share details about it with her employer.

“You want us to put out there you got $60 grand to write this?” De Groft wrote, according to the affidavit. “OK then. Shut up. You took the money. Stop being holier than thou.”

Halsi said he spoke for many in the art community who were offended by what the exchange represented. “The museum director was trying to get people to come to the museum any way possible, whatever it takes,” Halsi said. “The whole thing just devalued Orlando.”

The building Halsi chose for his mural belongs to the Renaissance Theater Company, whose co-founder and artistic director, Donald Rupe, said he was flooded with congratulatory messages as photos of the mural went viral. Though the mural’s appearance caught him by surprise, he agreed with Halsi’s viewpoint.

OMA’s board of trustees has announced that a special task force would “implement organizational and communications best practices.” Leading this effort is a new interim director, Luder Whitlock, a retired pastor and seminary president who also previously led the charitable arm of a local investment management firm.

This is not the first time the museum has been convulsed by a crisis in recent years. In 2020 OMA fired its previous director, Glen Gentele, who the Orlando Sentinel reported had been accused of widespread workplace harassment and creating what one museum manager called a “toxic culture.” After nine trustees resigned in protest over Gentele’s behavior — nearly a third of the board — the remaining trustees fired Gentele (with a $200,000 severance payment, according to public tax filings). Whitlock was brought in as interim director then, too, to help reform the museum’s workplace culture until De Groft was hired as director in February 2021.

Several employees pointed out that history seemed to be repeating itself. They noted that when staffers met with Brumback, the chairwoman of the board, to express concerns about the Basquiat show before its opening, she ignored them, deferring to De Groft’s judgment and publicly backing him even as further questions were raised about the art.

In a brief cellphone interview, Whitlock said OMA was “taking some pretty definite steps,” adding, “We want to put the past behind us.” He would not elaborate.

“He wanted to make sure we knew they were working to move ahead in the right away,” said Olson, who suggested the museum try to ensure that “checks and balances are in place, so that you don’t have rogue things happening that your organization as a whole is not behind.”

At the Rollins Museum of Art, plans are underway to break ground next year on a $25 million, 30,000 square foot building — one that would showcase art from old masters to cutting-edge contemporary work, including annual spotlights for Florida’s own emerging talent.

Several prominent donors, who have given annual five- and six-figure contributions to OMA, have been in conversations with the Rollins about shifting their financial support there over concerns about the leadership of OMA, according to the donors, who were granted anonymity to describe private conversations.

Heller, the director of the Rollins, said that while she was proud to see local support coalescing for her museum, she took no pleasure in the events at OMA that were alienating its donors.

“It’s not just about the Orlando Museum of Art,” she said. “It’s about our entire community. Museums operate on public trust, and now that trust has been hurt. This is the first time in my 30-year career that several people have come into the museum and the first thing they asked me was, ‘How do you know that art is real?’”