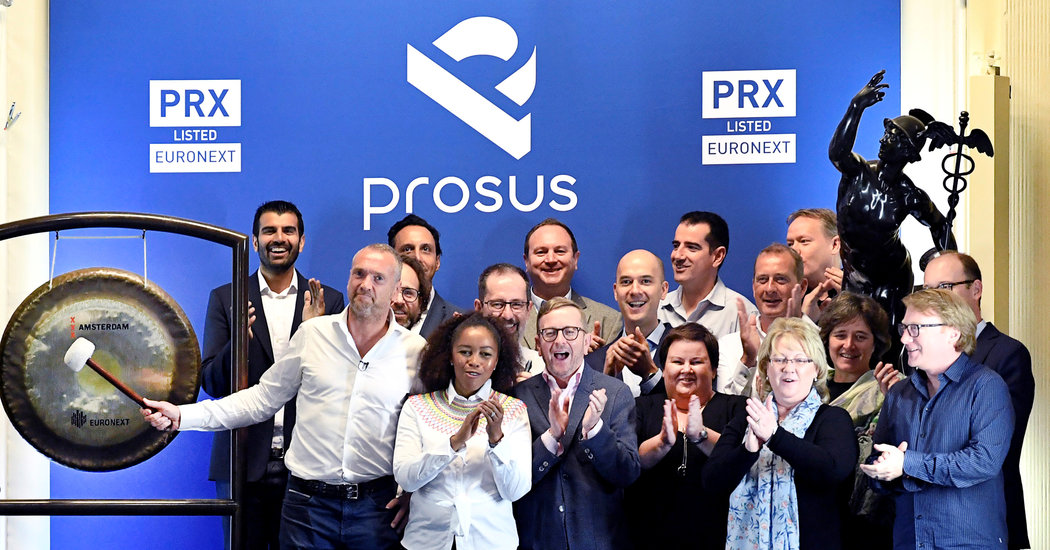 Shares in that unit, Prosus, made their debut on Wednesday on the Euronext exchange in Amsterdam, where they soared more than 25 percent. Prosus ended the session with a market value of around 120.5 billion pounds, or nearly $133 billion.

That made Prosus, which earned $4.2 billion in profits in the fiscal year that ended March 31, Europe’s biggest consumer internet company, with holdings that include a global collection of online marketplaces, payment systems and food-delivery start-ups.

But the most valuable piece in Prosus’ portfolio is its 31 percent slice of Tencent. Naspers paid $32 million for a 46.5 percent stake in 2001, in the Chinese company’s early stages. On Wednesday, the Tencent stake, since diluted, was valued at around $131 billion.

The question now is whether Naspers, through its new publicly traded vehicle, can follow that blockbuster bet with other investments that deliver smashing returns.

In spinning off the unit, Naspers hoped to establish Prosus — Latin for “forward” — as a tech giant in its own right, and to draw in a more diverse crowd of shareholders than it currently has. With a debut that left Prosus trailing only SAP in market value among tech companies listed in Europe, Naspers leaders feel their goal is within reach.

“If you’re a portfolio manager with a European mandate, and you’re looking for something at scale, there’s not really anything else,” Bob van Dijk, group chief executive of Naspers and Prosus, said in an interview.

Another reason for the move was that Naspers, which retains a 73 percent stake in Prosus, had essentially outgrown its home on the Johannesburg exchange. It accounts for about 25 percent of the market’s entire value, an outsize presence that has often forced investors to sell Naspers shares to avoid having too much exposure to one stock.

Naspers began in 1915 as a newspaper publisher affiliated with South Africa’s then-dominant white National Party. The company’s name is a shortening of “De Nasionale Pers,” Afrikaans for “The National Press.” Naspers apologized in 2015 for “complicity in a morally indefensible moral regime,” namely apartheid.

An investment on pay-TV in South Africa in the 1980s gave the company the money it needed to diversify and to start investing abroad.

One of the overseas investments was the stake in Tencent, which was struck under Mr. van Dijk’s predecessor, Koos Bekker. Among the most lucrative investments of all time, it echoes the Japanese conglomerate SoftBank’s success with its early investment in Alibaba, another Chinese internet giant. In some ways, the Amsterdam listing is meant to position Naspers as a European version of SoftBank, which has become one of the world’s biggest investors in technology companies.

Buoyed by its Tencent experience, Naspers began to invest elsewhere around the world, particularly in emerging markets where the cost of buying was low and the chance of another breakout gain was high.

In 2007, it invested $166 million for about a third of Mail.ru, which owns what is now Russia’s most popular social network. Naspers’ stake is now worth about $1.4 billion.

In 2012, it bought an 11 percent stake in Flipkart, the fast-growing e-commerce company, for $616 million. When Walmart bought control of Flipkart last year, Naspers sold its stake to the American retailer for $2.2 billion.

Since 2017, Naspers has participated in investment rounds of at least $100 million in eight start-ups, according to data from the research firm CB Insights. The biggest was its $1 billion investment in Swiggy, an Indian food-delivery start-up.

The company’s holdings are divided into three main areas: classified ad companies, including OLX and Letgo; payment systems and technology; and food-delivery firms like iFood of Brazil and Delivery Hero of Germany in addition to Swiggy. (Prosus also has a venture capital team, which has taken smaller stakes in start-ups focused on areas like education technology.)

Naspers executives cite the global nature of the company’s business as one of its main strengths. The PayU payments business, for example, operates in 18 markets, including India, Russia, South America and Turkey. Its classified ad unit is one of the biggest in markets like Brazil, Indonesia and Poland. It also competes with Craigslist in the United States.

Michal Borkowski, the founder and chief executive of the online education company Brainly, which is based in Krakow, Poland, said in an interview that it was Naspers’ long-term view that persuaded him to take an initial $15 million investment from the company’s venture arm.

Naspers has now led two rounds of investment in Brainly, helping the company grow to more than 150 million monthly users in over 35 countries, Mr. Borkowski said.

Naspers executives acknowledge that Prosus is unlikely to ever duplicate the astronomical return generated by the Tencent stake. They are also aware that being so reliant on one investment could leave Prosus vulnerable to weaknesses in the Chinese company’s performance, as happened last year when Tencent was affected by a government crackdown on its games.

But Mr. van Dijk insisted that Naspers had shown it was capable of creating durable, fast-growing operations in classifieds and payments in addition to having made a smart move, enhanced by a bit of luck, with its early bet on what became a superstar company.

“We’ve proved with two of our focuses that we can build profitable businesses at scale,” he said.