After years of struggling, the oil industry has emerged from the downturn with a renewed focus on doing one thing well: generating a gusher of cash. Companies are laser-focused on investing only in projects that can earn high returns. That returns-focused approach, however, has surprisingly transformed several oil companies into cash flow growth machines. Three that stand out are Pioneer Natural Resources (NYSE: PXD) , Encana (NYSE: ECA) , Noble Energy (NYSE: NBL) .

In late 2016, Pioneer Natural Resources unveiled a 10-year plan to increase output up to 1 million barrels of oil equivalent per day by 2026, setting the course to increase production at a 15% compound annual clip. What’s even more impressive about Pioneer’s plan is that it would allow cash flow to increase at an even higher compound annual growth rate — 20% — boosting it from about $2.8 billion last year to a whopping $11 billion by 2026. Furthermore, the company noted that it needed oil to average only $55 per barrel to hit that target, which is below the current price. 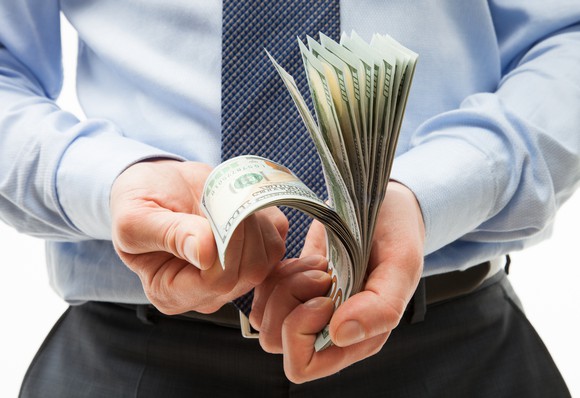 Those oil companies are on their way to produce a gusher of cash in the coming years. Image source: Getty Images.

Only a handful of companies have achieved that annual rate of cash flow growth over the past decade. In fact, according to an analysis by J.P. Morgan, only 15 companies in the Russell 1000 Index eclipsed that 20% annual pace in the last 10 years. Most of them were tech giants . If Pioneer can deliver a similar growth rate in the coming years, investors could be in for a treat: The 15 stocks in the study achieved an average yearly return of 19% over the last decade.

Shifting the focus from oil production to cash generation

Encana unveiled a new five-year plan in late 2016, boasting at the time that it could increase production 60% through 2021, which would fuel a 300% increase in cash flow at $55 oil. The company updated that plan last year, shifting the focus to cash flow, which it now sees increasing at a 25% compound annual rate through 2022, assuming $50 oil.

What was interesting about Encana’s plan is that while the company will reinvest the bulk of its cash flow into new wells, it’s also on pace to generate $1.5 billion in excess cash over the next five years, as long as oil averages $50 a barrel. With crude currently in the $60s, cash flow is coming in higher than expected this year. Thus, the company recently authorized a $400 million share-repurchase plan to return some of its growing stream of cash to investors over the next year. 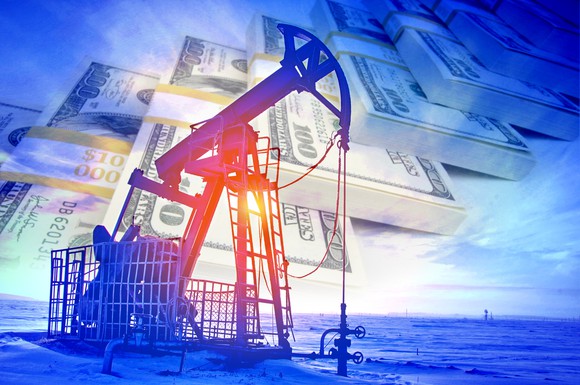 Noble Energy provided an updated outlook through 2020 earlier this year. The company has completed a transformational portfolio repositioning during the downturn, CEO David Stover said it was on pace to “deliver attractive multi-year volume growth and even more attractive cash flow growth.”

In its outlook, Noble Energy estimates that it’s on pace to increase cash flow at a 35% compound annual rate if oil stays in the $50s, and achieve a faster 40% compound annual growth rate if oil remains at its current level. That plan would generate more cash than the company needs, setting it up to produce $1.5 billion in excess cash through 2020 at $50 oil, with another $1.5 billion in free cash possible at current prices. The company has already announced plans to return $750 million of that money to investors via a share-repurchase program, initially funded by an upcoming asset sale. Noble also anticipates sending more cash to investors in the future through dividend increases.

Cash is key to fueling returns

Companies that increase their cash flow at a rapid pace tend to deliver exceptional returns over the long term. These three oil stocks stand out since all are on track to produce fast-paced cash flow growth over the next several years, even if crude prices slip. That rapidly growing cash flow stream should also give them the money for shareholder-friendly practices such as stock buybacks and higher dividends, which could in turn help these stocks potentially deliver market-beating returns.

10 stocks we like better than Pioneer Natural Resources
When investing geniuses David and Tom Gardner have a stock tip, it can pay to listen. After all, the newsletter they have run for over a decade, Motley Fool Stock Advisor , has tripled the market.*

David and Tom just revealed what they believe are the 10 best stocks for investors to buy right now… and Pioneer Natural Resources wasn’t one of them! That’s right — they think these 10 stocks are even better buys.