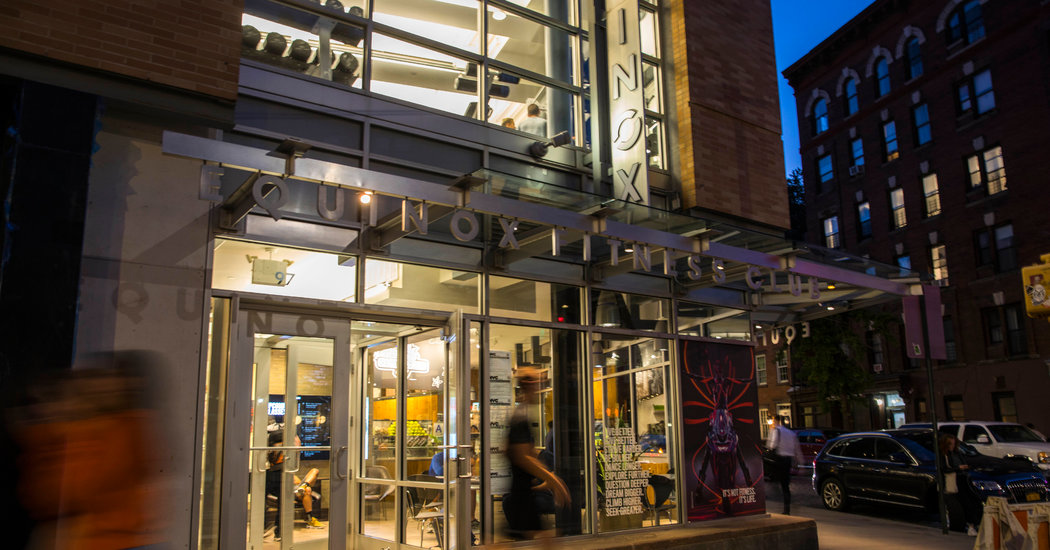 Equinox, the high-end gym chain, calls its five-story facility on Greenwich Avenue in Manhattan a “fitness mecca.” It features a juice bar and a boxing studio, a eucalyptus steam room and a saltwater lap pool.

But until a recent renovation, a less glamorous side of Equinox emerged in the gym’s break room: a spindly, wire-framed bunk bed, blocked from view by a shower curtain, where exhausted personal trainers napped between sessions, using towels to fortify mattress pads so thin that some trainers joked they must have been salvaged from a prison.

Since its founding in the 1990s, Equinox has become the nation’s premier high-gloss gym chain by selling itself as a kind of luxury product with a progressive culture. Its gyms dot the cities of blue-state America, and the company proclaims its support for environmental sustainability, professional growth and community building. In August, Equinox explicitly distanced itself from President Trump when the chairman of its parent company, Stephen Ross, held a fund-raiser for his re-election campaign.

For some personal trainers, though, working at Equinox is more grueling than glamorous, according to court records and interviews with labor lawyers, fitness experts, Equinox managers and nearly 30 current and former Equinox trainers.

While the gym offers a well-regarded professional development program, as well as health insurance and other employee benefits that few fitness chains provide, many Equinox trainers, especially beginners, work exhausting schedules. Some say they can spend 70 or 80 hours a week at the gym — many of them unpaid — hustling to recruit clients, waiting between workouts, planning routines and conducting training sessions. In the gym’s draining environment, new trainers frequently last only a few months, unable to cope with the long hours and low starting pay, interviews show.

The bed at the Greenwich Avenue location was at least a designated place to sleep. Current and former Equinox trainers in Dallas, Boston, New York, San Francisco and Los Angeles said they or their colleagues routinely slept in cars, curled up on yoga mats or dozed off with heads resting on tables during long sessions at the gym.

“It’s very ‘Hunger Games’-style,” said Alexander Miotti, a trainer who worked at a Los Angeles Equinox until this summer, when he left after a dispute with his managers. “They’re like, ‘We want you to have a really nice work-life balance.’ But at the same time, ‘How do you expect to be successful if you’re not here for 12 hours a day?’”

Upon hiring, Equinox trainers begin a process called “ramping”: roughly 15 to 20 hours a week putting away weights on the gym floor, plus some additional hours of educational sessions, all paid at or slightly above minimum wage. During those floor shifts, trainers are expected to pitch their services to Equinox members working out in the gym. As they start accumulating clients, trainers can convert floor hours into better-compensated training sessions — $26 an hour for beginner trainers and as much as $62 per session for more experienced employees. Trainers who succeed at Equinox pick up enough clients to move from floor shifts to coaching members full time. A complex bonus system allows top earners to make six-figure salaries.

In practice, however, many beginner trainers struggle to recruit enough clients to live comfortably and end up spending unpaid hours at the gym in a bid to improve their numbers. A trainer who worked at an Equinox in Los Angeles said she could not afford to pay her electricity bills during the ramping period and left after five months. Eric Hannah, who worked at Greenwich Avenue in 2014 and 2015, said he sometimes earned only a little over $200 a week. Omar Kharroub, who trained clients at an Equinox in Northern California until August, said he had worked as a DoorDash delivery driver on the side to support himself.

“You have trainers who are making $80,000, $90,000,” said Zdenek Dzur, a trainer who left the Greenwich Avenue location two years ago after nearly a decade at Equinox. “But there were very few, and you have to be like a superman to do that.”

Joe Matarazzo, an Equinox vice president who oversees personal trainers, said the company does not “encourage sleeping at our clubs” and never requires trainers to put in unpaid overtime: Trainers’ per-session rates are meant to cover additional time spent preparing for workouts with clients. And the Greenwich Avenue training staff is set to get a new break room as part of renovations at the facility, he said.

“We work hard to really teach them how to learn time management,” Mr. Matarazzo said.

But he acknowledged that the 50 percent annual turnover rate among the company’s more than 1,000 personal trainers was “not something we’re satisfied with.” Equinox declined to reveal the turnover number for beginner trainers, who make up between 10 and 15 percent of the staff.

Tired trainers are hardly unique to Equinox. As Americans have grown increasingly focused on nutrition and physical fitness, personal training has become one of the fastest-growing occupations in the United States, according to the Bureau of Labor Statistics. But the common perception of the job — reinforced by celebrity trainers who show off their impressive physiques on Instagram — is not always the reality. Some gyms do not pay trainers at all for time spent recruiting clients.

Over the last decade, Equinox and other major gym chains have faced class-action lawsuits for failing to properly compensate trainers, whose one-on-one sessions with members provide an important revenue stream. And while they guide the health and fitness routines of hundreds of thousands of Americans, fewer than half of all personal trainers had health insurance the last time the American Council on Exercise conducted a survey, in 2013.

“It really can be a grind,” said Cedric Bryant, the exercise council’s president. “It’s not for the faint of heart.”

Still, some trainers say Equinox offered them opportunities they would not have gotten elsewhere. Giovanni Roselli, a longtime Equinox instructor, said he started at the gym in 2007 with no experience as a personal trainer and rose to become one of the company’s top performers.

“They built me from the ground up,” Mr. Roselli said. “Any trainer, no matter where they work, especially in the beginning, is going to have crazy hours, no matter if you’re at Equinox or anywhere else.”

In part, the long hours at Equinox are a reflection of the reality of any appointment-based profession: Training sessions can be scattered throughout the day.

But during the ramping period, beginner trainers at Equinox often find that 20 hours of floor shifts per week is not enough time to recruit a stable base of clients. Mr. Miotti, the trainer in Los Angeles, said a manager had encouraged him to spend unpaid hours writing an email newsletter to woo clients. Mike Denton, a trainer at a Boston Equinox who left the gym in 2016, said one of his bosses had once reprimanded him for taking a weekend off.

“I was told explicitly that I should be there from sometime early in the morning to around 8 p.m. at night,” Mr. Denton said.

Over the years, trainers have sued Equinox in state and federal courts for unpaid overtime. In 2013, Equinox settled two overtime suits in California for $5.65 million.

Last year, Stephanie Rosales, who worked as a personal trainer at one of the company’s Dallas gyms, sued Equinox, seeking unpaid wages. (Ms. Rosales and Equinox agreed to dismiss the case last month.) A former competitive kickboxer, Ms. Rosales said she had spent 80 to 90 hours a week at the gym during her first months on the job.

On a Saturday morning in July 2017, Ms. Rosales said in an interview, she got permission from her Equinox manager to leave work to visit her mother, who had suffered a heart attack in El Paso, a nine-hour drive away.

But when she returned to the gym the next Monday, she said, her manager informed her that for all of August she would have to work a series of minimum-wage shifts picking up weights to make up for canceling sessions over the weekend.

“It’s like I got punished for seeing my mom,” Ms. Rosales said.

Equinox declined to comment on any of the lawsuits but said in a statement that Ms. Rosales’s experience that July “is not reflective of Equinox policy or our values in any way.”

Mr. Matarazzo, the vice president for personal training, said the gym provides trainers with a number of resources for recruiting clients, including lists of people to cold-call and special events where trainers can showcase their skills in front of Equinox members. “In most cases, they’re not working 15 to 20 hours only,” he said. “They have opportunities.”

Still, the profession’s broader unpredictability persists, even for successful trainers: If clients cancel sessions to go on vacations or business trips, a trainer may end up working too few hours to qualify for certain bonuses and have to take a pay cut.

Even established Equinox trainers who fall short of performance benchmarks are sometimes told to resume taking shifts on the floor to accumulate new clients. A longtime trainer at an Equinox in Florida, who spoke on the condition of anonymity for fear of losing his job, said he was once asked to go back to the floor after his numbers dipped when clients were traveling and he took time off for physical therapy after a surgery.

At Equinox, Ms. Rosales spent so many hours marketing herself to clients and supervising workouts that she had little time to stay in shape and gained as much as 30 pounds. Sometimes, she said, she napped at work. Other trainers stowed blankets and pillows in their lockers.

Ms. Rosales now works as a private trainer, coaching clients in Dallas. But when she quit Equinox two years ago, she had no idea what she would do next.

“At that point,” she said, “anything was better than working there.”