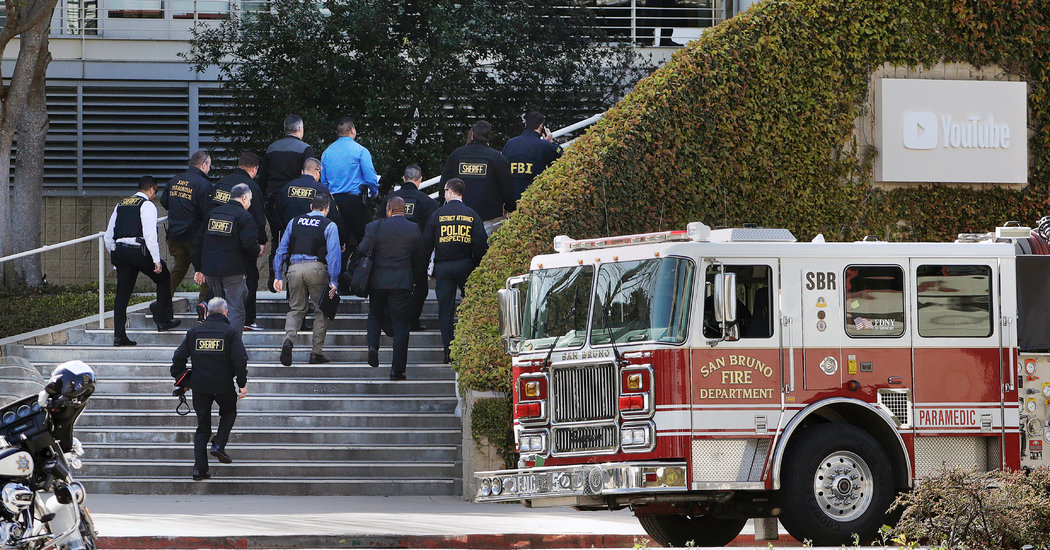 The woman identified by the police as the person who shot three people at YouTube’s headquarters in California on Tuesday before killing herself had long accused the video site and its owner of discrimination.

The San Bruno Police Department said that the attacker, Nasim Najafi Aghdam, who was in her late 30s and had lived in Southern California, opened fire with a handgun in a courtyard at YouTube’s offices in San Bruno. While the police have not provided a possible motive, Ms. Aghdam had alleged that YouTube and Google, which owns it, took measures to hurt her website in search results and reduce the number of views on her videos.

On Wednesday morning, the police were still trying to piece together Ms. Aghdam’s activity in the days leading up to the shooting. Her family reported her missing on March 31 in San Diego, the San Bruno Police Department said, and she was located by another police department on Tuesday morning, before the shooting, about 30 miles south of YouTube’s headquarters.

She also told her family in recent weeks that she “hated” YouTube because it was censoring her videos and paying her less. “She was angry,” her father, Ismail Aghdam, who lives outside Los Angeles in Riverside County, told the Bay Area News Group.

“When searching for my website in google, at top of link they add ‘an error occurred’ but there is no error!” a website under her name, NasimeSabz.com, said in February 2016. “They add it to keep you from my visiting my site.”

On the website and in YouTube videos, Ms. Aghdam discussed Persian culture, veganism and animal cruelty, performed music parodies and gave exercise tutorials. She had YouTube pages in Persian, Turkish and English.

Her personal website included graphic photos of slaughtered animals and pleas not to wear fur jackets or have sex outside of marriage. But more recently, she focused on what she perceived as discrimination by YouTube and Google.

She complained on her website that “new close-minded youtube employees” had “filtered my channels” starting in 2016, causing the number of views on her videos to decrease. She posted a screenshot of her YouTube page showing that one video had received 366,591 views but that she would receive an estimated $0.10 in advertising revenue from it.

In February 2017, she criticized YouTube in a video on Facebook for restricting one of her workout videos to older audiences. “This is what they are doing to weekend activists and many other people who try to promote healthy, humane and smart living — people like me are not good for big business, like for animal business, medicine business and for many other businesses. That’s why they are discriminating and censoring us,” she said in the video.

By Tuesday night, YouTube, as well as Instagram and Facebook, had taken down her pages and videos. Ed Barberini, the chief of the San Bruno Police Department, said Wednesday that investigators were aware of Ms. Aghdam’s criticism of YouTube and Google.

“We are learning that Ms. Aghdam had a problem with the policies or practices that YouTube had employed,” Chief Barberini said in an interview on ABC’s “Good Morning America.” “Obviously, she was upset.”

While Ms. Aghdam appeared to have a long-running grudge against the company, the Police Department said that it did not appear that she knew any of the three shooting victims.

Zuckerberg San Francisco General Hospital received a man, 36, in critical condition; a woman, 32, in serious condition; and a woman, 27, in fair condition, a hospital spokesman, Brent Andrew, said at a news conference on Tuesday.

A fourth person had injuries that weren’t from a gunshot, the police said. They scheduled the next news conference for Wednesday morning.