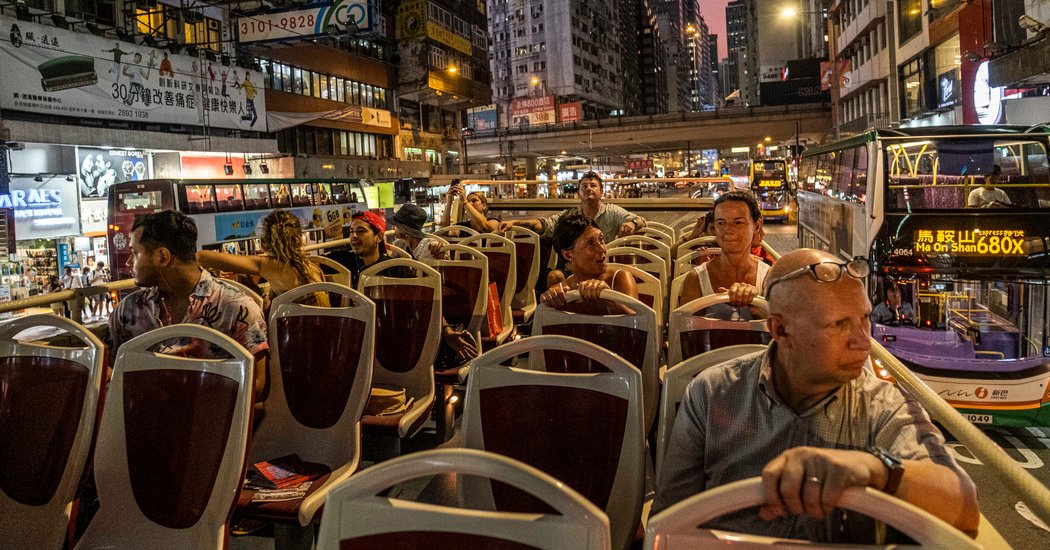 HONG KONG — It was the second day of Golden Week, usually one of Hong Kong’s busiest shopping periods, and Matthew Tam and his co-workers at a jewelry store were looking as lonely as a band of Maytag repairmen, surrounded by display cases of luxury watches with nary a customer in sight.

Sales at the store, in the once-teeming shopping district of Tsim Sha Tsui, have plummeted 90 percent in recent months, thanks in large part to the evaporation of tourists from mainland China who have been staying away since antigovernment protests began in June.

“It’s quite worrying,” said Mr. Tam, 56, who relies almost entirely on commissions for his income. “I don’t know how much longer I can endure.”

Hoteliers, salesclerks, restaurateurs and tour guides across Hong Kong have been racked by similar fears as footage of tear gas-shrouded clashes between riot police officers and furious protesters are broadcast around the world, scaring off potential visitors.

With the city’s Beijing-backed leadership refusing to concede to the protesters’ demands for free elections and an independent investigation into allegations of police misconduct, an unmistakable sense of alarm is spreading among both small-business owners and corporate executives who see no way out of the impasse.

“People are hunkering down but it’s really starting to hurt, and the longer this goes on, the gloomier the picture starts to feel,” said Tara Joseph, president of the American Chamber of Commerce in Hong Kong, who has lived in the city for nearly two decades.

The pall thickened after the Hong Kong leadership invoked emergency powers to ban the wearing of face masks during street rallies, a move that prompted fresh unrest and fury among those already angered by a slow erosion of civil liberties. The government has avoided harsher measures for now, but the prospect of restrictions like a curfew remains widely discussed.

The tourism industry is a major driver of Hong Kong’s economy that alone keeps several hundred thousand people employed. But the overall number of tourists arriving in this semiautonomous territory has plummeted. Arrivals at Hong Kong’s international airport in August fell nearly 40 percent from a year earlier, even before the violence at protests escalated.

The falloff has been especially steep among mainlanders, who made up more than three-quarters of the 65 million people arriving here last year. The flow of visitors from mainland China nose-dived 55 percent during Golden Week.

The numbers are stark. Hotel occupancy rates are roughly 60 percent, down from 91 percent earlier this year. Retail sales dipped by 23 percent in August, the steepest decline on record. Many economists believe the city’s economy is slipping into recession.

The deepening crisis is reflected in a cascade of cancellations of major events like the Hong Kong Tennis Open, the Hong Kong Cyclothon, and the Hong Kong Wine and Dine Festival, all of which had been scheduled for this month.

For now, international finance and real estate, other pillars of the Hong Kong economy, have been largely unscathed. Corporate leaders worry, however, about the long-term impact to Hong Kong’s reputation as a stable hub for multinationals in greater China, especially if a crackdown leads to serious bloodshed or Beijing tries to interfere with the city’s hallowed independent court system.

Anxiety over shifting sentiments was heightened by a Goldman Sachs report estimating that at least $3 billion in investment had in recent months shifted from Hong Kong to Singapore, another former British colony and a regional rival for international finance. Law firms, global banks and trading companies have been drawing up contingency plans for the worst-case scenario.

There have been some reports of layoffs, and a few of the city’s ritziest hotels have been forcing employees to take unpaid leaves or have their wages temporarily trimmed.

“We really want the violence to stop as soon as possible so Hong Kong can be promoted around the world as a safe place,” said Ronald Wu, executive director of Gray Line Tours of Hong Kong, which has seen its business drop by more than half.

Alice Chan, executive director of the Travel Industry Council of Hong Kong, said only 16 tour groups arrived during the first few days of the Golden Week holiday, compared with the 110 that arrived daily last year.

Ms. Chan said antipathy toward Hong Kong spiked in August after protesters shut down the airport and attacked two men from mainland China. The spectacle of protesters burning the national flag on other occasions, she said, also has not helped. “These incidents have hurt the feelings of mainlanders,” she said.

On the mainland, China’s state-run propaganda machine has cast the protests as a riotous anti-China separatist movement orchestrated by the United States and other countries eager to tear the motherland apart. Chinese censors have blocked news reports and images that present the protesters’ yearning for democracy and their fear of being subsumed into the mainland’s authoritarian maw.

Hong Kong Disneyland would normally have been crammed with mainlanders during the holiday, but this year, the protests clearly dented the mood at the Happiest Place on Earth. The vast parking lots were mostly empty, just three of 16 ticket windows were open, and lines for many attractions were short or nonexistent.

Zhou Wenhua, 38, a real estate sales executive from Shanghai, was thrilled. “If we went to Shanghai Disneyland this week, we wouldn’t be able to move,” she said after taking her family on a spin through the It’s a Small World ride on an otherwise empty boat.

Unlike many mainlanders roaming the park in mouse ears and gnawing on roast turkey legs, grilled fish balls and pressed squid, Ms. Zhou was willing to talk about the protests, which she described as an “insurrection.”

In an echo of Beijing’s narrative, she cast the participants as spoiled children unappreciative of the Chinese government and its achievements. “Without the Communist Party, China would still be impoverished and weak,” she said. “They really should stop their rioting.”

Not that she had witnessed the protests firsthand. Ms. Zhou and her family had spent the previous two nights cloistered at their downtown hotel room, dining on room service.

Locals, fearful of impromptu subway shutdowns that can leave them stranded, are also less likely to meet friends or dine out. The West Kowloon Cultural District, a $3 billion, decade-long project that opened to sold-out performances this year, has seen ticket sales plunge. For the first time this month, district officials canceled several events in anticipation of protests and transportation shutdowns.

For many, the looming question is whether a prolonged or precipitous economic decline will chip away at popular support for the movement. A few business owners shook their heads in dismay over the vandalism and disruptions to public transport, though they asked to remain anonymous given the growing vigilante-style attacks on those the protesters deem hostile to their cause.

Surrounded by display cases stacked full with $70,000 Rolexes and $20,000 Tudor watches, Cherry Chang, 30, the owner of a small store in Tsim Sha Tsui, the shopping district, said sales have halved over the last few months. Still, she said she was willing to endure short-term financial pain for the loftier goals of genuine democracy and the preservation of the city’s generous civil liberties.

Cheuk-Yan Lee, general secretary of the Hong Kong Confederation of Trade Unions, which supports the protest movement, said he thought most Hong Kongers would blame the government for any hardship, not the protesters. The bigger threat, he said, is losing the freedoms and reliably independent courts that coaxed so many international companies to set up shop here in the first place.

“What will really hurt Hong Kong is not a brief drop in consumption but a loss of faith from global investors,” he said. “Instead of suppressing the protests, the government needs to revive confidence in the rule of law. Otherwise, we will just end up being another Chinese city.”