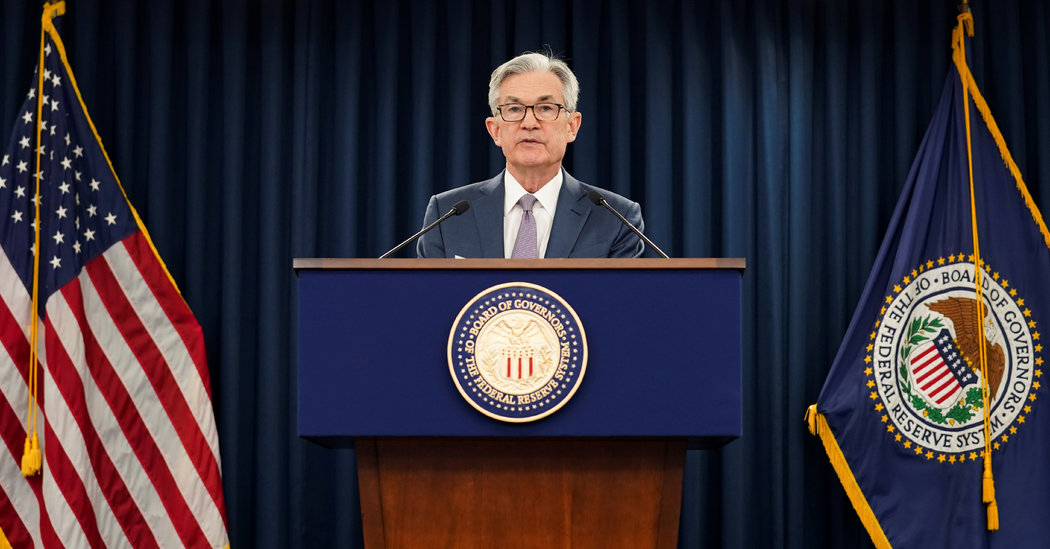 The Federal Reserve said it could pump $2.3 trillion into the economy through new and expanded programs it announced on Thursday, ramping up its efforts to help companies and state and local governments suffering financial damage from the coronavirus.

The central bank rolled out its relief package just as the government announced that 6.6 million more Americans were newly jobless, laying bare the severe damage to the economy as quarantines keep workers at home and grind entire sectors to a standstill. About 16 million people have filed for unemployment in the past three weeks.

The Fed announced that it would use Treasury Department funds recently authorized by Congress to buy municipal bonds and expand corporate bond-buying programs to include some riskier debt. The Fed also rolled out a highly anticipated lending program that targets midsize companies, including those not eligible under a Small Business Administration loan program.

The measures push the Fed far beyond anything it attempted in the 2008 financial crisis, and expand its already significant efforts to cushion the economy and calm markets, which have included money market interventions and an unlimited bond-buying campaign. The Fed had previously rolled out about $500 billion worth of emergency lending programs, so this could more than quadruple the size of its push.

“We are deploying these lending powers to an unprecedented extent, enabled in large part by the financial backing from Congress and the Treasury,” said Jerome H. Powell, the Fed chair, in a speech after the announcement on Thursday. He pledged to continue using those powers “forcefully, proactively, and aggressively until we are confident that we are solidly on the road to recovery.”

The Fed and Congress have been racing to support the United States economy as coronavirus shutters businesses, tanks consumer confidence and leaves millions of workers without a paycheck.

While some of their newly-announced programs urge or incentivize companies to hang onto employees, they are just getting up and running, coming too late for many. The most recent economic rescue bill signed into law by President Trump included a new cushion for laid-off workers, in the form of more generous unemployment benefits.

The Fed’s goal is to make sure the ongoing hit to the labor market and the broader economy does not prove long-lived. The emergency programs are intended to get credit flowing to companies and governments that might struggle to access funding as uncertainty roils markets, helping them to make it through. Congress gave the Treasury Department $454 billion to back up the Fed’s efforts, which need to be insured against losses, giving officials room to scale them up dramatically.

The Fed’s moves on Thursday use that funding to push the central bank’s emergency lending powers into uncharted territory. Officials had avoided buying municipal debt and lower-rated company debt, out of concern about credit risk and to avoid picking winners and losers. But amid market disruptions, calls for Fed action in both areas have been building.

And the Fed provided details on another previously untried “Main Street” lending program that could offer some relief to major American employers left out of other government initiatives. About 19,000 United States companies have between 500 and 10,000 employees, and they employ 30.3 million workers, Census Bureau data show. Many of those are too big to get small business loans, but too small to tap corporate debt markets.

Companies with up to 10,000 workers, or up to $2.5 billion in revenues, will be able to gain access to four-year loans through the program. Banks will originate the loans and retain a 5 percent share, but can sell the remainder — in total, up to $600 billion — to the Fed. The Treasury will provide $75 billion in backup to protect the central bank.

While companies seeking the loans “must commit to make reasonable efforts to maintain payroll and retain workers,” according to the announcement, the central bank has yet to strictly define what that means or how it will be enforced.

Though the borrowers must follow restrictions on compensation, stock repurchase and dividend restrictions set out in the recently passed congressional package, the Fed stopped short of applying limits on offshoring suggested in the law.

Principal and interest on those loans can be deferred for one year, but the borrowing is not forgivable, unlike the small business loans Congress authorized. The program design is still open to comment. The Fed gave no guidance on when it, or other new programs announced, would be up and running.

Help for state and city governments

Fed relief for states and cities had also been highly anticipated because Congress provided only limited aid to those governments in its recent legislation. The markets that local governments use to issue bonds and finance themselves have been in turmoil, which threatened to make it difficult for officials to fund operations just as revenues dried up and the need for cash skyrocketed.

“Eligible state-level issuers may use the proceeds to support additional counties and cities,” the Fed said, while foreshadowing that there may be more to come. The central bank “will evaluate whether additional measures are needed to support the flow of credit and liquidity to state and local governments.”

The Treasury will also ramp up its insurance on the Fed’s two corporate bond-buying programs and its so-called Term Asset-Backed Securities Loan Facility, or TALF.

That’s in part because they are adding riskier debt: Some companies that were downgraded to below investment grade after March 22, for instance, will now be eligible for Fed help. So will some high-yield exchange-traded funds, which are built on bonds but trade like stock.

Companies that benefit from the programs will not be forced to restrict share buybacks or dividends. Congress mandated in its legislation that businesses receiving “direct loans” using the new funding must do both, but the Fed does not see the corporate bond-buying as falling under that umbrella.

The TALF program, which everyone from lawmakers to private equity firms have been urging the Fed to expand, will now accept bundles of debt built on both commercial mortgages and leveraged loans, which are given to companies already deeply in debt. That said, those bundles — called asset-backed securities — must still be very highly rated, among other restrictions. Big investors have been pushing the Fed to expand the program down the ratings ladder.

The central bank hasn’t slammed the door on the possibility of further expansion.

“The feasibility of adding other asset classes to the facility or expanding the scope of existing asset classes will be considered in the future,” the Fed said in its term sheet.

Officials are trying to make sure that a broad swath of companies can continue obtaining credit, allowing them to stay in business and hang on to workers.

The Fed’s efforts to pump new money into the financial markets so far have helped improve tense trading conditions. But riskier credit markets — which companies with shaky businesses or bigger debt loads rely on to constantly refinance their obligations — had gotten no direct help, and had seen relatively little improvement.

Borrowing has become comparatively expensive for companies with risky debt. That lowers the chances that such businesses, wobbly in the best of times, will survive the sharp downturn.

The new expansions may help to soften the sharp cutoff between investment grade and junk status, but only to a limited extent. Under one program, American Airlines and United Airlines would not be able to sell their bonds or loans to the Fed because their ratings were below investment grade before the Fed’s cutoff date. Southwest Airlines would qualify, because it is still rated investment grade. Delta, even though it was recently downgraded by Moody’s, would be included.

“It’s not like the door is open to every piece of junk in the world — far from it,” said Julia Coronado, founder of MacroPolicy Perspectives. “It looks shocking, but I think there’s definitely still credit-checking, and quality standards.”

The central bank did hint at its own boundaries on Thursday. Some lawmakers, including House Speaker Nancy Pelosi, a Democrat, have been urging the central bank to “think big,” while others have worried that the funding going to the Fed would be used to “bail out” big companies.

“These are lending powers, not spending powers,” Mr. Powell said. “The Fed is not authorized to grant money to particular beneficiaries.”