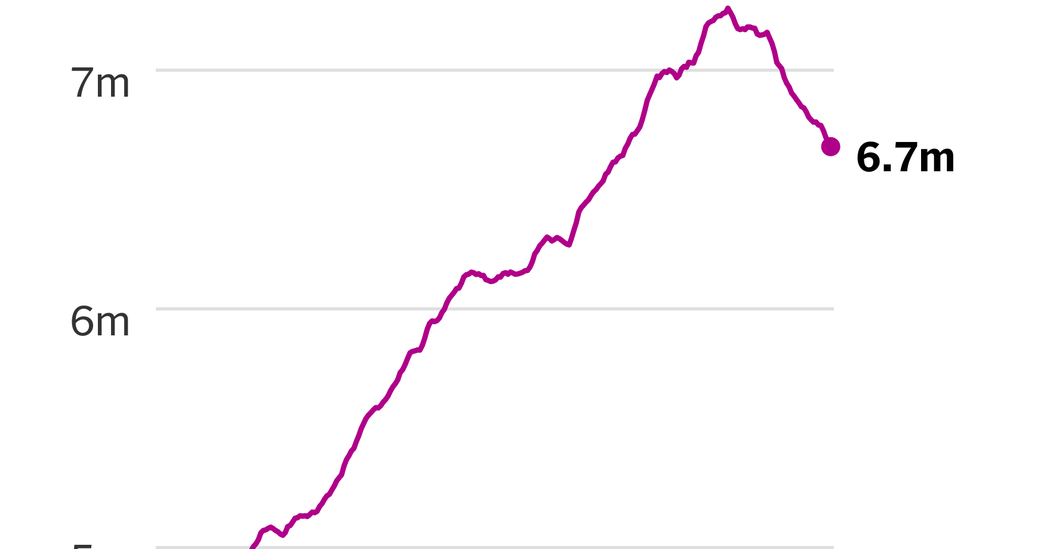 The rise in the number of Americans not working because of disability was so persistent for two decades that some economists began to hypothesize that the trend would never reverse.

But perhaps it has. Since a peak almost four years ago, that number has steadily fallen, showing its largest decline — both in terms of head count and percentage — in at least the last 25 years. It’s good news, but it also raises important questions about how much further the labor market has to heal.

Disability and a shrinking work force

One factor was a steady increase in the number of people not participating in the labor force because of health problems or a disability. In 1994, the Bureau of Labor Statistics determined that 4 percent of Americans 25 to 54 were not seeking work because of those reasons. By mid-2014, the number had risen to almost 6 percent of that age group.

Economists were especially alarmed because the increase appeared tenacious. It was rising before the 2001 recession, rose faster in response to the 2001 and 2008 recessions, then kept rising during the subsequent recoveries.

But then it began to fall: slowly at first and then, beginning in 2016, faster. Over all, the number of prime-age people who cite disability as their reason for not working has shrunk by 7 percent since mid-2014.

Who has found jobs?

The data shows that the decline has come almost entirely from the older half of the prime-age population (that is, people between 40 and 54). The drop has also been steeper among the less educated. The number of disabled nonparticipants without a high school diploma fell by 18 percent, versus 4 percent for those with at least a high school diploma. It has been somewhat larger among women (minus 9 percent) than men (minus 6 percent).

Around 10 percent of prime-age workers who described themselves as disabled in 2016 had found a job by 2017. This pace of job finding matches the rate in 1999 and 2000, when the labor market was generally tight and healthy.

Even as some people are leaving the category of the disabled nonworking, others are joining it, of course. The rate of people newly describing themselves this way has slowed; it is now similar to the pace just before the Great Recession.

One question is whether these people are finding high-quality jobs.

There is some evidence they are. Analysis of Current Population Survey data shows that around two-thirds of the new jobs taken by people who formerly described themselves as disabled have been full time. This group also appears to have been more likely than other job finders to find work in manufacturing and construction, and no more likely to be self-employed. On the other hand, over the last three and half years, their wages have been 16 percent lower on average than those of other new job finders.

Note, too, that not all of the people no longer describing themselves as disabled joined the work force. Some continued not to work but gave a different reason — mostly citing home or family care. Additionally, a small number simply aged out of our 25-to-54 category.

Employment may have more room to grow

There is no guarantee work force participation will return to its previous levels. And while the risks of an American recession currently appear low, another downturn could arrest or even reverse the current trend.

But at the very least, what has happened since 2014 suggests that the declines in prime-age employment since 2001 are not all permanent, and that employment may still have further room to grow if the tight labor market continues.

This would take time, though. At its recent pace of decline, it would take six to eight more years without another recession for the percentage of prime-age people not working because of disability to return to 2000 levels. Added to the nine years of recovery we have already had, that would imply an economic expansion longer than any in American history.

Moreover, the weakness in prime-age employment is not explained solely by disability. Other reasons for prime-age nonemployment, such as school enrollment, have declined even more slowly than disability. Some, such as early retirement, still appear to be rising.

This also does nothing to explain why disability rates rose so much in the first place. Demographics certainly played a role. Some have pointed to the benefits in disability programs, particularly the rise in benefit awards for musculoskeletal conditions, though others argue the effect of these programs on nonemployment has been small. Exposure to growing exports from China may have been a factor as well.

Moreover, the rise in prime-age disability was unique to the United States. So rather than betting on never-ending economic expansions, better policies — to manage the health of workers and help them find and keep work — may be a more effective long-term strategy.

Still, in a labor market still off its 2000 highs, the trend is a surprising but welcome development.

The analysis is based on the definition of “disability” in the Current Population Survey, which is determined based on respondents’ answers to questions regarding labor market activity and specific health ailments.

Being “disabled” in the C.P.S. does not necessarily indicate that the person is also participating in a public disability benefit program such as Social Security Disability Insurance (S.S.D.I.) or Supplemental Security Income (S.S.I.). We therefore cannot be sure based solely on this data that the rise in job finding among the C.P.S. disabled reflects a rise in job finding among S.S.D.I. and S.S.I. recipients (note that both programs are structured so as to allow recipients some amount of work before benefits disappear). Note that administrative head counts of S.S.D.I. and S.S.I. beneficiaries have been falling over roughly the same time frame as the C.P.S. disabled; since these head counts include beneficiaries 55 and older, some of the S.S.D.I. and S.S.I. declines may represent people retiring out of the program and into traditional Social Security. This is a minor factor in my analysis of the prime-age C.P.S. disabled.

Ernie Tedeschi is an economist and head of fiscal analysis at Evercore ISI. He worked previously at the U.S. Treasury Department. The analysis here is solely his own.