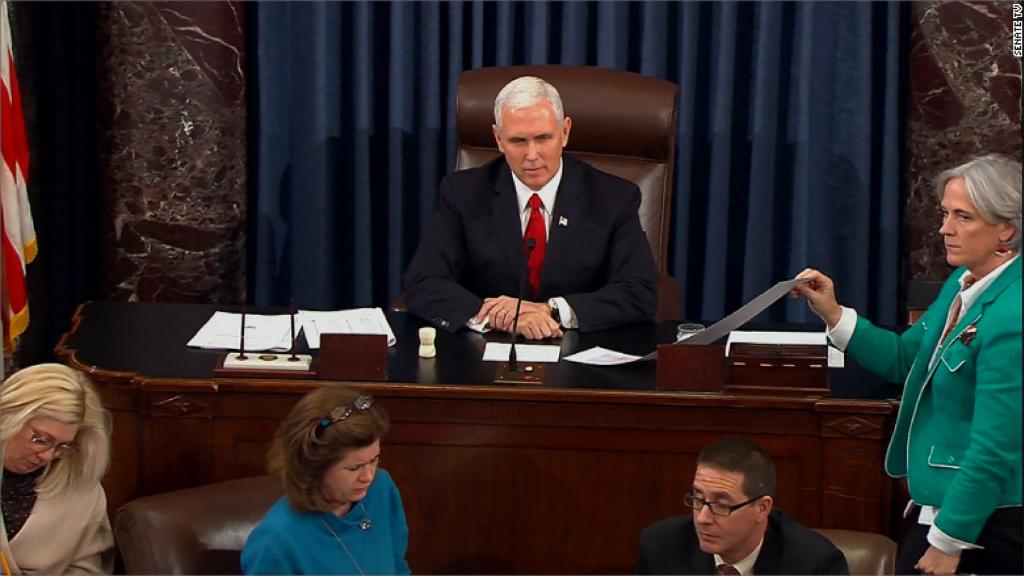 President Trump and Republicans in Congress are on the verge of delivering a big tax cut for businesses. There’s just one catch: Neither the economy nor corporate America needs it.

For years, the United States recovered from the Great Recession at a frustratingly slow pace. After the initial stimulus package in 2009, Congress offered little help, and even stunted growth by cutting federal spending in 2013.

Now the economy is finally healthy: Unemployment is at a 17-year low, growth is at a three-year high, and companies have never been more profitable. And Washington is providing stimulus anyway, adding to America’s mountain of debt.

“Passing the tax reform bill is like throwing a small cup of gasoline on a fire that’s already burning fairly well,” Dave Lafferty, chief market strategist at Natixis Investment Managers, wrote in a report on Wednesday.

By splurging on a $1.5 trillion package of tax cuts, Congress will probably have less ammo to fight the next downturn. That’s because the tax cuts will be paid for by borrowing more money.

“This tax cut makes us less equipped to deal with the next disaster, war or recession,” Maya MacGuineas, president of the nonpartisan Committee for a Responsible Federal Budget, wrote in a statement on Wednesday.

Calling it the “wrong legislation at the wrong time,” MacGuineas warned the tax plan will provide just a fleeting bump to economic growth at the expense of making the already daunting fiscal situation even worse.

Although Republicans argue that the tax overhaul will pay for itself with faster growth, independent analysts doubt that. Even accounting for projected growth, the legislation would still add about $1 trillion to deficits, according to the Joint Committee on Taxation.

Asked by CNNMoney about the fiscal impact of the tax plan, outgoing Federal Reserve chair Janet Yellen cautioned against “taking what is already a significant problem and making it worse.”

Of course, short-term-oriented Wall Street loves the tax plan. By cutting the corporate tax rate from 35% to 21%, the overhaul will boost already high profits and allow companies to reward shareholders with fatter dividends and bigger stock buybacks.

To be sure, almost everyone agrees that the outdated corporate tax code needs a makeover to close loopholes and help American businesses compete. Tax reform that doesn’t add to the deficit makes sense, regardless of the timing.

But some prominent voices in business are pushing back on the timing of deficit-financed stimulus.

Pointing to low unemployment and 3% economic growth, Goldman Sachs (GS) CEO Lloyd Blankfein recently told Bloomberg: “I don’t know that this is the moment that you provide the biggest stimulus.”

New York Fed President Bill Dudley said he’s not in favor of deficit-financed stimulus because “the economy doesn’t need it.”

Too much stimulation could cause both the economy and the stock market to overheat. That in turn could force the Fed to accelerate interest rate hikes, offsetting the benefits of tax cuts. Treasury rates have begun to jump, a sign that investors are anticipating greater government borrowing.

“Yes, it could blow out deficits and that could be a big problem. There is no question about it,” said Peter Boockvar, chief market analyst at The Lindsey Group.

Related: How much you’d pay under tax plan depends on a lot

“It’s pure fantasy to think that the tax bill will lead to significantly higher wages and growth, as Republicans have promised,” he wrote.

Bloomberg slammed the tax overhaul as an “economically indefensible blunder that will harm our future” because it makes key challenges like rising deficits, growing wealth inequality and the skills crisis worse.

Trump defended the tax overhaul, tweeting on Wednesday that the “results will speak for themselves, starting very soon.” He added, “Jobs, Jobs, Jobs!”

The president is right that the jury is out. It’s possible that the tax overhaul will pay for itself by sparking stronger economic growth than economists expect. It wouldn’t be the first time economic forecasts were wrong.

And many executives are cheering. FedEx (FDX) CEO Fred Smith on Tuesday predicted the “pro-growth” tax plan will “power the economy” by making America more competitive.

But even if CEOs like the tax cuts, there’s no guarantee they will use them to create jobs. Even FedEx said it only “may” boost spending if the tax plan gets enacted.

Only 14% of CEOs surveyed by Yale University said their companies planned to make large, immediate capital investments in the United States if the tax plan became a reality.

One often forgotten obstacle: America faces a shortage of skilled workers — and the tax plan doesn’t fix that. This mismatch between the skills workers have and the talent companies need has driven job openings to record highs.

“My biggest fear is that we get this huge boom in business confidence but company hiring is stymied because we don’t have the workers,” said Joe Quinlan, a market strategist at Bank of America’s U.S. Trust division.