Shares of General Electric GE dipped more than 1% on Wednesday, extending the struggling conglomerate’s nearly 25% slump over the past two months. At these levels, many investors might sense an opportunity to buy on the dip as the historic company looks to turn things around. However, a number of lingering problems-including President Trump’s proposed tariffs-could continue to cause issues for GE.

On top of sluggish activity in its core businesses and mounting debt issues, General Electric faces regulatory headwinds. The company recently adopted new accounting standards that restated its earnings for fiscal 2016 and 2017-a move that came on the back of a Securities and Exchange Commission investigation into GE’s accounting for lengthy service contracts.

The once-dominant industrial behemoth also faces potential legal action over allegations that two of its financial units violated U.S. law related to subprime mortgages. General Electric is now looking to shed as much as $20 billion worth of assets to trim some of the fat from its existing structure.

Meanwhile, the Trump Administration’s latest trade rhetoric could add even more problems to GE’s growing list. If Trump’s proposed 25% tariff on imported steel and 10% levy on non-U.S. aluminum becomes a reality, it could lead to a rapid rise in prices that would force GE to re-value its roughly $134 billion backlog across its power, renewable energy, and oil & gas businesses.

General Electric’s struggles are hardly new, and the stock has now lost more than 50% over the past year. But even with this monumental slump, GE does not present great value for investors looking to buy on the dip.

Our system lumps seven other companies into GE’s peer group, including other massive conglomerates like Honeywell HON and United Technologies UTX .  Here’s a look at how the company’s Forward P/E stacks up against that group: 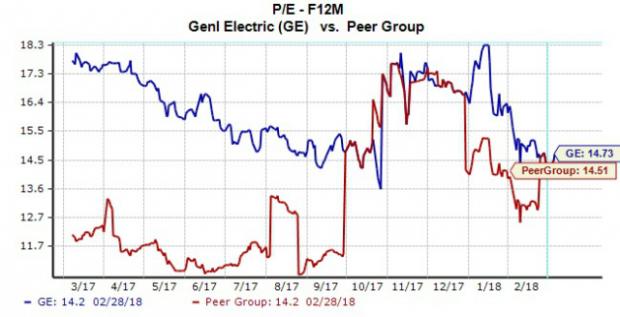 Considering how drastically GE has been sold off within the past year, it might surprise investors to learn that the stock is still trading at a slight premium to its larger peer group. In addition to this unattractive P/E, General Electric’s PEG ratio of 2.8 is not great, and its current cash flow of $1.69 per share is less than the industry average of $2.05.

Overall, GE is holding a “D” grade for Value in our Style Scores system.

General Electric is also currently sporting a Zacks Rank #5 (Strong Sell). But the Zacks Rank does not necessarily consider the aforementioned valuation metrics. Instead, the proven strategy focuses on earnings estimates and estimates revisions to determine which stocks have an improving outlook and which stocks are trending in the wrong direction.

Here’s a look at the revision trend for GE:

As we can see, the Zacks Consensus Estimate has come down significantly on the back of universal downward agreement among revising analysts.

Some might assume that the worst of the damage is already done for GE, but analyst estimates actually tend to come down gradually over time. As GE continues to struggle, analysts could become increasingly bearish, adding even more volatility to the stock.

The total market cap of all cryptos recently surpassed $700 billion – more than a 3,800% increase in the previous 12 months. They’re now bigger than Morgan Stanley, Goldman Sachs and even Visa! The new asset class may expand even more rapidly in 2018 as new investors continue pouring in and Wall Street becomes increasingly involved.

Zacks’ has just named 4 companies that enable investors to take advantage of the explosive growth of cryptocurrencies via the stock market.