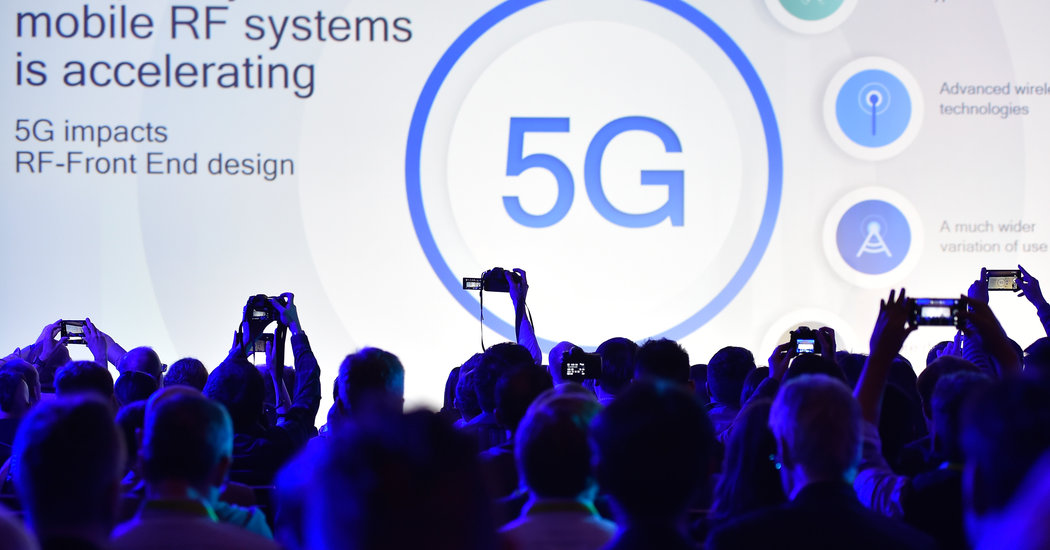 Companies still have room to influence 5G technology because it has not yet been deployed. As of now, a group called 3GPP — staffed by engineers from many companies — has been defining the specifications so that devices that operate with 5G technology can “talk” to one another. The group delivered its first major set of standards in December.

Mike Thelander, an analyst with Signals Research Group, predicted that American carriers will have some 5G services operating in late 2018 but that smartphones that use the technology won’t be ready until 2019.

Qualcomm has long been one of the most active contributors of cellular technology, playing a particularly influential role in 3G technology as well as current 4G networks. Yet the effort to develop 5G standards has brought many new players to the fore, including Huawei, a relative newcomer to the field.

Huawei, which makes gear like cellular base stations and other key equipment to operate 5G networks, has been largely blackballed from the United States on national security grounds. But the Chinese company’s sales have surged elsewhere, such as Europe, and Huawei has taken a leading role in submitting technology for inclusion in 5G technical standards.

The Cfius letter estimated that Huawei owned 10 percent of the patents essential for 5G networks. A Huawei spokesman said it had been working on 5G since 2009, having spent $600 million on related research already and committing $800 million more in 2018 alone.

Many American carriers also buy cellular equipment from Sweden’s Ericsson, which has long helped set cellular standards and estimates that it has been working on 5G for a decade. Erik Ekudden, the company’s chief technology officer, said its technical contributions had topped those of any other company.

Other major contributors include South Korea’s Samsung Electronics, Finland’s Nokia and several companies in Japan. Intel, which has been determined to reduce Qualcomm’s market dominance in wireless chips, has also significantly stepped up efforts to influence 5G standards.

Officials appointed by President Trump have pointed to regulatory barriers that have kept the United States behind nations like China, which has a national plan for 5G networks using technology by Huawei and other Chinese companies like ZTE.

Last month, Brendan Carr, a Republican member of the Federal Communications Commission, announced a regulatory plan that would allow wireless carriers to bypass environmental assessments for the construction of 5G wireless infrastructure.

“The rest of the world is very conscious of our leadership in 4G, and they are questioning whether we will have the resolve to take the deregulatory steps necessary to extend our leadership into 5G,” Mr. Carr said.

Ajit Pai, the commission’s chairman, said last week in a speech to global telecommunications executives and regulators that the agency was prepared to make more spectrum available for those networks. The airwaves would need to be approved by Congress before companies could use them.

At last week’s Mobile World Congress, which is one of the biggest wireless trade shows, companies were quick to provide evidence of their leadership in 5G. Huawei, for example, demonstrated the first cellular base station that complies with the new 3GPP specifications, said Will Townsend, an analyst at Moor Insights and Strategy, a research firm.

Still, others at the event, which was held in Barcelona, Spain, said it was hard to top Qualcomm’s presence. The San Diego company, which gets much of its profits from licensing patents rather than selling chips, listed a string of technologies that it has shaped for 5G, with obscure descriptions like “Massive Mimo,” “flexible slot-based framework” and “scalable O.F.D.M.-based air interface.”

“If you walked through Qualcomm’s booth at Mobile World Congress, it is an amazing thing, in terms of the breadth of the technology they show and the quality of people they have staffing it,” said Robert DiFazio, a vice president in the research arm of InterDigital, another company that contributes to cellular standards.