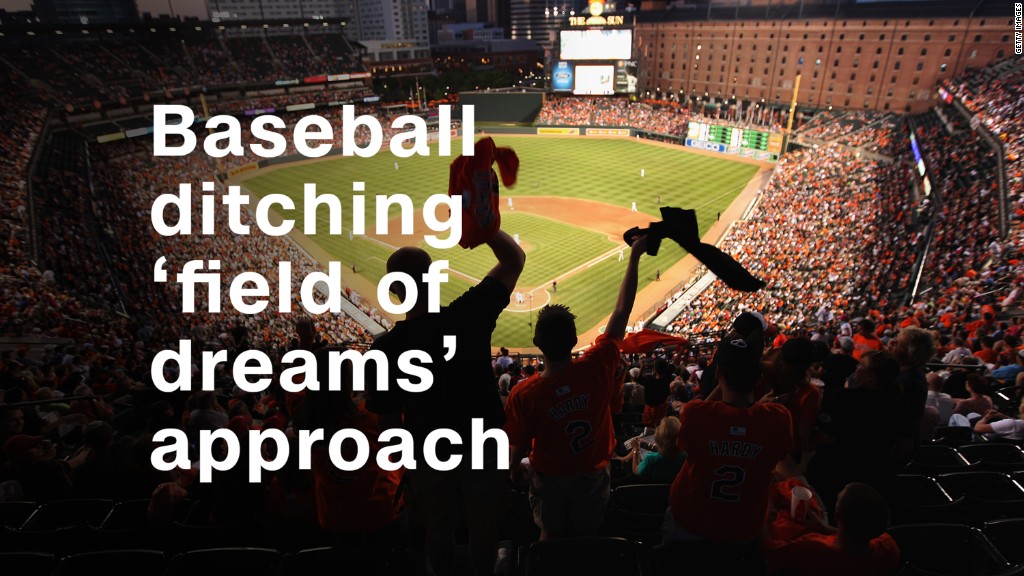 Baseball may be embedded in the tapestry of American history, but to stay relevant it needs to adapt.

“If you build it, they will come” is an approach the national pastime can no longer afford, Orioles Executive Vice President John Angelos told CNNMoney. Like all pro sports leagues, Major League Baseball must focus on engaging the next generation of fans.

“When you’re a sport that was one of the big three in the prior century, you tend to be a little bit kind of lean back as opposed to lean forward,”Angelos said. “[You] think they’re going to come to us because we’re consecrated in time and memorialized in tradition.”

“Younger audience members and eyeballs — if you’re not looking for that, you’re not protecting the business,” Angelos said.

In order to appeal to families and children, the Orioles started inviting kids to run the bases every weekend. In the past the team would invite kids to the field on a less consistent schedule.

“We’d had a handful of them and they’d be at different dates, [which is] hard to communicate and hard to remember,” Angelos said. “Now we do kids run the bases every Sunday in the season … and the response rate has been dramatic.”

MLB is considering plenty of options to try and attract a younger audience. To counter a perception that the game is slow and boring to watch — games average 3 hours and 5 minutes this season — the league is likely to implement a 20-second pitch clock and raise the strike zone in 2018.

They’re also working with social media platforms like Facebook and Snapchat to engage viewers where they are. In May, MLB partnered with Facebook to stream one game a week. It has a similar deal with Twitter. In 2016 the league also inked a deal with Snapchat to provide behind-the-scenes snaps from the dugout.

The biggest goal is to attract new young players — who often become the most loyal fans.

MLB also runs the Renewing Baseball in Inner Cities (RBI) Program, the Elite Development Invitational and youth academies to help develop young players. It also plans to hold a Little League Classic in August where young players can watch the Pittsburgh Pirates play the Arizona Cardinals on an historic field in Pennsylvania.

Related: MLB players are launching their own social media app

While many efforts focus on kids and young players, baseball has gained traction with adults.

In 2016, nearly 25 million people played baseball and softball, according to a report by the Sports & Fitness Industry Association.

Baseball participation increased by 7.7% and slow-pitch softball jumped by 8.1%. Together they were the most played team sports in the U.S.

“Traditional team sports do not usually see these kind of double digit increases,” said SFIA President and CEO Tom Cove. “Basic efforts to put a ball, bat and glove in more young people’s hands really connect with the joy of the game.”