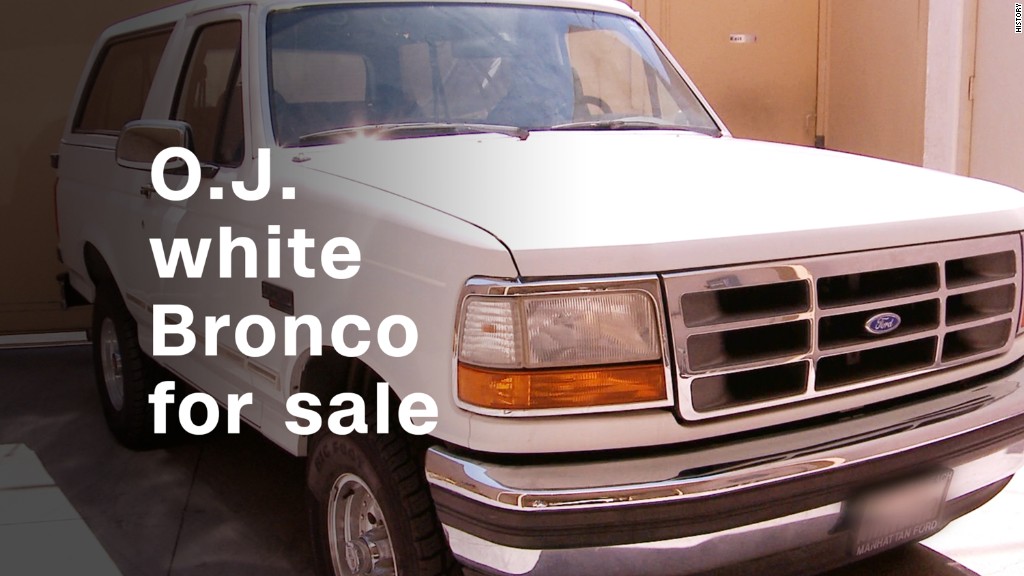 Yes, the famous, or infamous, white Ford Bronco that carried O.J. Simpson as he tried to evade police in 1994 is going on the market.

The car had been owned by Al “A.C.” Cowlings, Simpson’s friend and former teammate. During the chase, Cowlings drove the car and spoke with police on his cell phone. Simpson, armed with handgun, rode in the back after refusing to surrender in connection with the murder of his ex-wife, Nicole Brown Simpson, and her friend Ron Goldman.

The 60-mile, low-speed pursuit throughLos Angeles was broadcast live around the world, catapulting the car into history.

Since shortly after the chase, Cowling’s famous Bronco has been owned by Mike Gilbert, who had been Simpson’s agent. Gilbert says he bought it so it wouldn’t be used in “distasteful” tours. He said he’s kept it pretty much hidden ever since.

More than two decades later, he is offering it for sale on Monday’s episode of “Pawn Stars” on the History Channel. On the show, customers present their stuff at a Las Vegas pawn shop, discuss a price with the owners and decide whether to sell.

In a clip, Gilbert says he had been offered $500,000 at one time for the Bronco, and that he’s looking to sell it to give money to his kids.

Related: Here’s how much O.J. Simpson stands to make in retirement

The show won’t say whether Gilbert gets that much money for it. In the clip, Gilbert tells one of the owners that the Bronco is the most viewed vehicle in history, ahead of the car that President Kennedy was riding in when he was assassinated.

“It’s really one of the most iconic things we’ve ever had,” Chumlee Russell, one of the stars of the show, who appears in the segment, told CNN. “I feel like everybody watched the slow speed Bronco chase. Even my brother who was born in ’96 knows about the Bronco chase.”

Related: O.J. Simpson hearing – A blast from the media past

“You can tell the it wasn’t driven too much. But if you’re looking for an everyday ride, it’s a bit out of that price range,” he said.

Jeremy Brown, a sports memorabilia expert who often appears on the show to give appraisals, said he doesn’t think it’s worth anywhere close to $500,000.

“If he was offered that, he should have taken that,” said Brown, who does not appear in Monday’s episode of the show. But he said the notoriety of the car and the chase probably does make it worth more than $100,000.

“Unfortunately, I could see it breaking low six figures, for all the wrong reasons,” he said. “Every time the name Ford Bronco is brought up, the first thing everyone thinks of is this car, and that chase.”