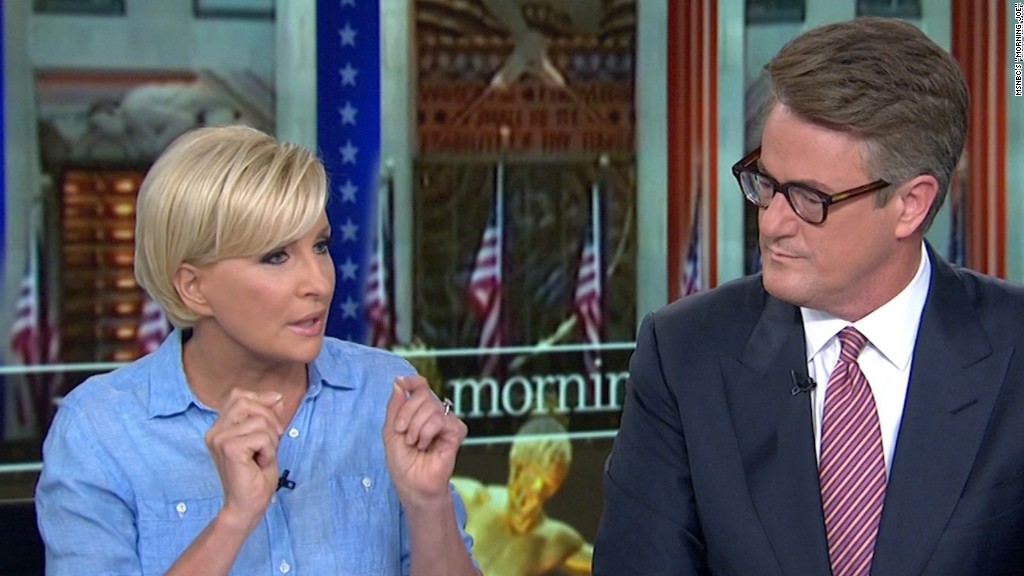 Joe Scarborough and Mika Brzezinski, the co-hosts of MSNBC’s “Morning Joe,” alleged Friday that the White House used an impending hit piece in the National Enquirer as a threat against them.

“This year, top White House staff members warned that the National Enquirer was planning to publish a negative article about us unless we begged the president to have the story spiked. We ignored their desperate pleas,” Scarborough and Brzezinski wrote in an article for the Washington Post.

Though it went virtually unnoticed at the time, the Enquirer did print a story about Scarborough, Brzezinski, and their relationship in its June 5 issue.

The White House itself has not publicly commented, but in a tweet Friday morning President Trump said, “Watched low rated @Morning_Joe for first time in long time. FAKE NEWS. He called me to stop a National Enquirer article. I said no! Bad show.” Separately, a White House official told CNN that Scarborough had called Trump’s son-in-law, Jared Kushner, about the Enquirer story and that Kushner had told Scarborough to call Trump. But this official denied that Kushner offered any quid pro quo.

In a statement Friday morning, the Enquirer said, “At the beginning of June we accurately reported a story that recounted the relationship between Joe Scarborough and Mika Brzezinski, the truth of which is not in dispute. At no time did we threaten either Joe or Mika or their children in connection with our reporting on the story. We have no knowledge of any discussions between the White House and Joe and Mika about our story, and absolutely no involvement in those discussions.”

The article itself includes what the Enquirer says are details about the private lives of Scarborough and Brzezinski, their relationship with each other — they are engaged to be married — and their previous marriages. It also says that the two “rushed into an engagement” after the Enquirer threatened to expose some of those details.

Notably, considering the controversy, the article makes special mention of their attitude towards Trump, saying at one point, “Joe, 54, proposed to his President Donald Trump-bashing sidekick during a trip to France in early May.”

Scarborough and Brzezinski have not addressed most of the substance of the Enquirer article, though on “Morning Joe” Scarborough took issue with a quote in the article from the owner of a store that is near Brzezinski’s home, according to the Enquirer. The store owner is quoted as having said that he has seen Scarborough there buying beer, but Scarborough said, “I’ve never bought a beer in my life, from a convenience store, from a bar, anywhere.”