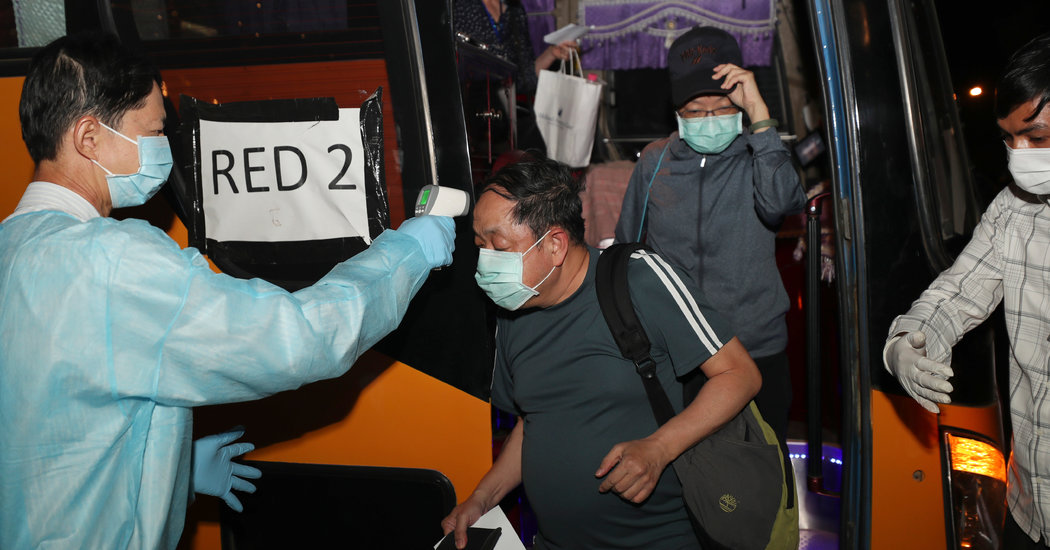 Passengers aboard the cruise ship Westerdam who have returned to the United States no longer need to isolate themselves and can resume normal activities, despite the fact that one passenger tested positive for the new coronavirus in Malaysia, the Centers for Disease Control and Prevention has advised.

A spokesman for the agency said on Saturday that the passenger’s diagnosis, confirmed twice by health officials in Malaysia, was a false-positive and noted that no other infections among passengers aboard the ship had been reported.

But on Sunday, the agency said that it had no direct evidence that the test result was a false-positive. Malaysian health officials announced that the passenger, an 83-year-old American woman, now tests negative for the infection, but experts say that is to be expected in a patient recovering from the illness.

(The test looks for an active infection; it is not an antibody test, which can tell whether a patient has ever been infected.)

“I’m thinking they must have some information from the testing laboratory in Malaysia that would give the C.D.C. confidence in saying yes, that was a false-positive result,” said Dr. William Schaffner, an infectious disease specialist at Vanderbilt University.

“Obviously, if it was a true positive, you would keep all those people in self-monitoring.”

The C.D.C. had issued that advice to state and local health departments last week, telling Westerdam passengers that they should restrict public activities for 14 days because they might have been exposed to the virus.

The owner of the ship, Holland America Lines, a division of Carnival Cruise Lines, celebrated the loosening of restrictions on Westerdam passengers.

“While we were not surprised by these results, we were very pleased to receive this confirmation,” Holland America said in a letter to Westerdam passengers. “C.D.C. does not recommend isolation or quarantine for guests returning home from Westerdam.”

On Sunday, the C.D.C. also said that Westerdam passengers would not require testing for the coronavirus. Tests of nearly 1,500 passengers, mostly conducted by Cambodian health officials, had turned up no other infections, the agency said, and therefore the passengers are at little to no risk of carrying the virus.

The Westerdam carried about 2,000 passengers, however, and those who left Cambodia first were never tested for the coronavirus.

The Cambodian government has regarded its embrace of the Westerdam as a political event and humanitarian gesture, and the country’s prime minister, Hun Sen, was incensed when Malaysian health officials said that the American passenger, who was identified as she arrived in Kuala Lumpur, was ill with the coronavirus.

Following the C.D.C.’s initial statement that the test was a false-positive, Mr. Hun Sen accused Malaysia of shoddy lab work. The woman never had coronavirus at all, he asserted.

“The irresponsibility of some foreigners on the health test of Westerdam passengers makes Cambodia the victim of its humanitarian work,” Mr. Hun Sen said in a Facebook post on Saturday.

“If I were the Malaysian P.M., I would remove the health minister for being neglectful and irresponsible.”

Testing for the coronavirus has proved problematic, said Dr. Jennifer Nuzzo, an epidemiologist at Johns Hopkins Center for Health Security, and questions have been raised about the test’s sensitivity.

A diagnostic test produced by the C.D.C. and sent to state health departments turned out to be flawed, and new test kits must be manufactured.

“If the C.D.C., a world renowned scientific institution, is having trouble, it’s highly likely others are having trouble as well,” Dr. Nuzzo said.

Timing is also critical: People who test negative may turn positive a few days later, depending on when during the incubation period a sample is taken.

Very few Americans are being tested. The C.D.C. requires people to be symptomatic and to report having had a clear route of exposure, such as recent travel to Wuhan.

“It’s important to put this one potential case in the context of thousands and thousands whom we are not testing,” Dr. Nuzzo added. “South Korea has tested more than 20,000 people. We have tested probably under 1,000.”

Questions about the possible exposure of Westerdam passengers to the coronavirus have swirled since Feb. 1, when the ship picked up 768 new passengers in Hong Kong and embarked on a 14-day voyage whose itinerary included stops at ports in the Philippines, Taiwan, Japan and South Korea.

But Hong Kong already had at least 10 cases of coronavirus by the end of January, and announced its first death early in February.

The cruise line tweaked the Westerdam’s itinerary, but one port after another turned it away, and it remained at sea for nearly two weeks until Cambodia allowed it to dock in Sihanoukville on Feb. 13.