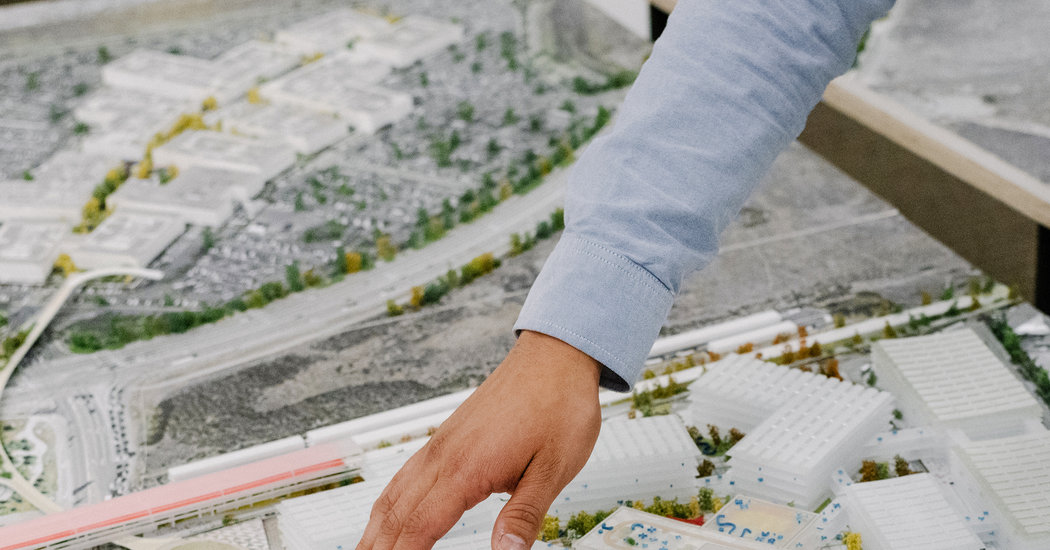 Hardy Green, author of “The Company Town: The Industrial Edens and Satanic Mills That Shaped the American Economy,” said that the tech companies had been reviving elements of the company town in the United States for years now.

The free meals, nap pods, concierge services, yoga classes, on-site laundry and haircuts are a perk but also a modern way of slowing down the mill clock so the workers can spend more time working. But in a society where government is increasingly ineffective, company towns are nevertheless likely to be welcomed, or at least tolerated.

“It may be the best option for many, just as a benevolent dictatorship can be O.K. for as long as the benevolence lasts,” Mr. Green said.

Only seven years ago, Silicon Valley had a very different attitude about building housing for workers, much less the community. A gaunt Steve Jobs, in what would turn out to be his last public appearance, made his case before the Cupertino City Council for a new Apple headquarters.

Mr. Jobs told council members how great the new doughnut-shaped headquarters was going to be. It would have a lot of trees, a theater, curved windows. Architecture students would come from all over to study it.

City Council member Kris Wang had a question: How could the 60,000 Cupertino residents benefit from this new campus?

“We’d like to continue to stay here and pay taxes,” Mr. Jobs said. “If we can’t, we’d have to go somewhere like Mountain View.”

Ms. Wang, a former Cupertino mayor, persisted. “Do we get free Wi-Fi or something like that?”

“I’m a simpleton,” Mr. Jobs replied. “I always had this view that we pay taxes and the city should do those things. That’s why we pay taxes. If we can get out of paying taxes I’d be glad to put up a Wi-Fi network.”

Since that June 2011 meeting, the number of hours commuters in Silicon Valley lose every day to congestion has doubled to 66,000. About 300,000 new jobs have been created, pushing the median apartment rental rate up 37 percent and the median cost of a home to $968,000.

Meanwhile, the big companies — not only Apple but Amazon, which has an increasingly large presence in Silicon Valley, as well as Facebook and Google — are much wealthier.

Apple built an office for 14,000 workers and said how they got to work and where they would live was someone else’s problem. That is no longer acceptable from a public relations point of view, and would not be smart for the companies in any case. If Silicon Valley continues choking on its traffic, the companies will find hiring not merely difficult but impossible. Even for a tech programmer, a $2 million house is a hurdle.

So the virtual companies are being forced to grapple with the most intractable physical issues.

“I don’t think Google, for instance, thought they were going to have to get into the transportation business,” said Allison Arieff, editorial director of San Francisco Bay Area Planning and Urban Research Association, a research organization. “But they now have a giant swath of the company devoted to getting people around. Housing seems the next step. No one bats an eye if universities build housing for students, grad students and tenured professors.”

‘Money in Every Problem’

When the tech companies played a much smaller role in Silicon Valley 25 years ago, even the working class could afford to live here. So could Stanford University students. Traffic flowed naturally.

However enticing this past might seem, efforts to put the brakes on growth have had limited success.

Measure M, a 2014 effort to restrict development in Menlo Park’s downtown, was soundly defeated by voters. Patti Fry, a former chairwoman of the Menlo Park City Planning Commission and an architect of the measure, said she is wary of Facebook’s increasing size and power.

“They’re doing more than most companies, but most of what they do serves them,” she said. “I do not expect a company to have as a priority providing community services that a real community needs. They’re in business to be in business.”

Drew Combs is a former journalist who became a member of the Menlo Park Planning Commission and then ran for City Council in 2014. He was loosely associated with Measure M and when it failed, so did his bid. He is now chairman of the planning commission, which reviews the use permits required for large projects.

“I don’t think in a lot of cases this is a good-versus-evil battle,” Mr. Combs said. “This is a negotiation between different stakeholders.”