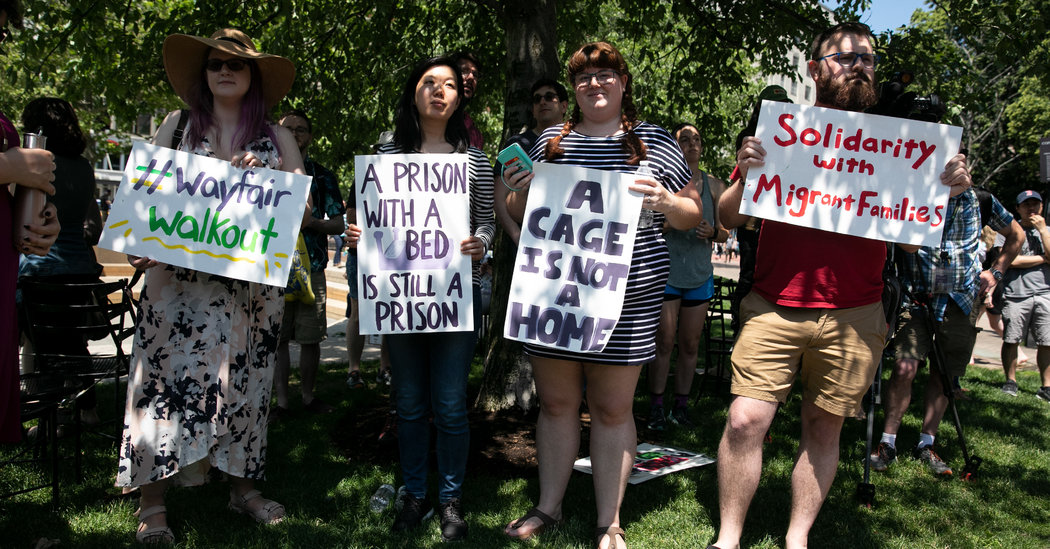 Frustrated Americans, with the help of social media, have been quick to cut off spending on big brands as a form of political protest in the Trump era. That makes an employee walkout at the online home furnishing company Wayfair particularly precarious for the company, as some of its staff members object to its involvement with the detention of migrant children near the United States’ southwestern border.

It’s a cautionary tale for other consumer-facing brands that might be found to be profiting from the detention centers, which are reportedly overcrowded and filthy. Employees at the company’s Boston headquarters walked out of their offices Wednesday afternoon to protest Wayfair’s sale of $200,000 of bedroom furniture to a government contractor that operates a network of the centers.

The walkout hasn’t led to a full-blown boycott yet, but the situation has drawn the attention of activist groups that have had some success using social media to rally consumer protest. Sleeping Giants, a Twitter account with 235,000 followers that was formed to choke off ad dollars to far-right groups after the 2016 election and has since become a consumer action organization, shared a tip on the Wayfair orders on Tuesday morning.

By the end of the day, the company’s employees had organized their walkout, and many consumers were already tweeting a #BoycottWayfair hashtag.

“We had gotten an anonymous tip from someone who worked there saying that the agency responsible for the detention centers placed a fairly large order and that there were people within the company that had a big problem with that, and we put that out there,” Matt Rivitz, who founded Sleeping Giants, said in an interview. “This next wave of protest is not just consumer-oriented, but it’s also employee-oriented.”

Wayfair did not respond to a request for comment.

Social media has helped fuel a host of boycotts in the past three years. The online boycott campaign #GrabYourWallet pressured retailers like Nordstrom to stop carrying merchandise tied to Ivanka Trump. Calls to #DeleteUber followed accusations that the company tried to profit from a protest against the president’s executive order barring refugees and immigrants from certain countries from entering the United States. L.L. Bean, New Balance, Kellogg and more have all found themselves at risk of potential politically motivated boycotts in recent years.

The conditions in shelters for migrant children are under renewed scrutiny amid reports of children and teenagers lacking showers, clean clothing and sufficient food.

More than 500 Wayfair employees signed a letter to the company’s leadership on Friday asking that Wayfair cease doing business with the contractor, BCFS, and others involved in operating such facilities. Wayfair’s leaders responded in a letter on Monday evening that defended the contract, which it said was to a customer following the law. It added, “No matter how strongly any one of us feels about an issue, it is important to keep in mind that not all employees or customers agree.”

“As we’re learning more about the horrific conditions in the Trump-era detention centers, things are ratcheting up and people are looking for more ways to express that frustration,” said Shannon Coulter, a founder of the #GrabYourWallet campaign.

“I got a lot of requests yesterday for information on any other companies that may be doing business with the detention centers,” she said.“We don’t have perfect visibility into that, but as we learn more about the companies that do business there, we’re adding them to the list,” she said. “We’re in touch with a lot of organizations that do work with immigrant communities.”

Ms. Coulter said earlier on Wednesday that her group was not yet calling for a Wayfair boycott because people at the border needed beds, and because it was waiting to see how the company’s executives would respond after the walkout

One way to avoid being targeted with a boycott? The company could end up choosing to fill the orders without profiting from them, she said.

But if Wayfair continues to profit from “cruel immigration policies,” she said, it would most likely end up on her group’s boycott list.

Mr. Rivitz said his group had not been calling for boycotts, but has been questioning companies while informing consumers, who can make their own decisions about what they want to support. That’s a particular risk for brands that sell directly to consumers.

“Yes, there are big private prison groups and large nonprofits that are involved in this, and ultimately they’re going to do business how they do business,” Mr. Rivitz said. “But certainly, companies that we all use, consumers expect a little bit more.”

“It’s really hard for people to see shiny and happy people in ads, then know a company’s profiting off incarcerated children,” he added.