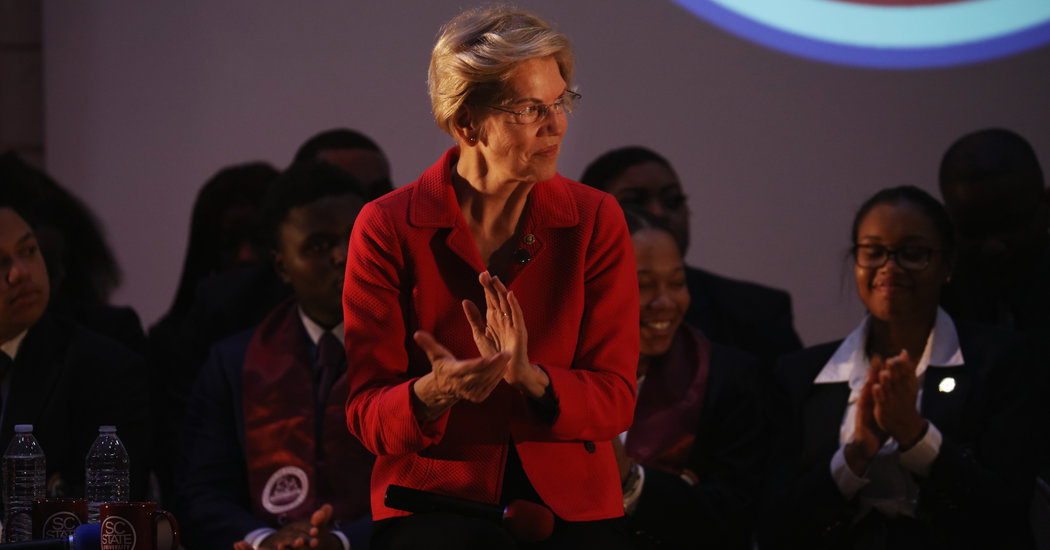 WASHINGTON — Elizabeth Warren is playing a game of dare with Facebook.

The ad, placed on Facebook beginning Thursday, starts with Ms. Warren announcing “Breaking news.” The ad then goes on to say that Facebook and Mr. Zuckerberg are backing the re-election of Trump. Neither Mr. Zuckerberg nor the Silicon Valley company has announced their support of a candidate.

“You’re probably shocked, and you might be thinking ‘how could this possibly be true?’ Well, it’s not,” Ms. Warren said in the ad.

In a series of tweets on Saturday, Ms. Warren said she had deliberately made an ad with lies because Facebook had previously allowed politicians to place ads with false claims. “We decided to see just how far it goes,” the senator from Massachusetts wrote, calling Facebook a “disinformation-for-profit machine” and adding that Mr. Zuckerberg should be held accountable.

Ms. Warren’s actions follow a brouhaha over Facebook and political ads in recent weeks. Mr. Trump’s campaign recently bought ads across social media that accused another Democratic presidential candidate, Joseph Biden, of corruption in Ukraine. That ad, viewed more than 5 million times on Facebook, falsely said that Mr. Biden offered $1 billion to Ukrainian officials to remove a prosecutor who was overseeing an investigation of a company associated with Mr. Biden’s son, Hunter Biden.

This past week, the Biden campaign demanded that Facebook, Twitter and YouTube take down the ad. Facebook refused, telling the Biden campaign that it would keep the Trump ad up because of its belief that statements by politicians add to important discourse and are newsworthy, even if they are false. Twitter and YouTube have also kept the ad online.

Ms. Warren’s false ads on Facebook are now set to escalate her growing feud with the world’s biggest social network.

Ms. Warren has turned into a vocal critic of tech companies and their power. She has called for behemoths like Facebook and Google to be broken up. In a leaked audio recording published this month of a meeting that Mr. Zuckerberg had with Facebook employees, he was heard saying that Facebook would sue if Ms. Warren were to enact the breakup plan as president. In response, Ms. Warren doubled down, saying that America needed to “fix a corrupt system that lets giant companies like Facebook engage in illegal anticompetitive practices, stomp on consumer privacy rights, and repeatedly fumble their responsibility to protect our democracy.”

This month, Ms. Warren’s campaign also sent an email seeking donations with the subject line “re: Mark Zuckerberg.” And at a rally in San Diego, as she talked about the power of huge corporations, she told the crowd, “Break them up. And yes, Mark Zuckerberg, I’m looking at you.”

For Facebook, the situation is tricky. The social media company has struggled in recent years with what to allow and disallow on its site, especially after revelations that Russian operatives used the platform during the 2016 presidential election to post disinformation to inflame the American electorate. Facebook has moved to clamp down on false content. Yet when the company removes or buries messages, ads, photos and videos, it is often called out for bias and censorship. Facebook has faced particular wrath from conservatives, who have said the social network intentionally suppresses what they say.

“Facebook believes political speech should be protected,” a spokesman for Facebook said on Saturday. “If Senator Warren wants to say things she knows to be untrue, we believe Facebook should not be in the position of censoring that speech.”

Truth in social media advertising is likely to become a bigger issue ahead of the 2020 presidential election. Mr. Zuckerberg is scheduled to speak about Facebook’s political speech policies this coming week at Georgetown University.

Presidential candidates have all been spending huge sums on ads on Facebook and other social media platforms to reach voters. Some campaigns have focused on advertising specifically on Facebook given its sheer size — it has more than 2.2 billion users worldwide — and the ability to spread ads and content cheaply and quickly across the platform.

Like her rivals for the Democratic nomination, Ms. Warren has spent a significant amount of money on Facebook advertising, which is a crucial way to reach potential grass-roots donors. Over all, her presidential campaign has spent more than $3.3 million on Facebook ads, according to numbers disclosed by the company.

Unlike the social media companies, some broadcast media outlets have refused to run the false Trump campaign ad that said Mr. Biden acted corruptly in Ukraine. CNN and NBCU, which declined to run the ad, said it violated their standards.