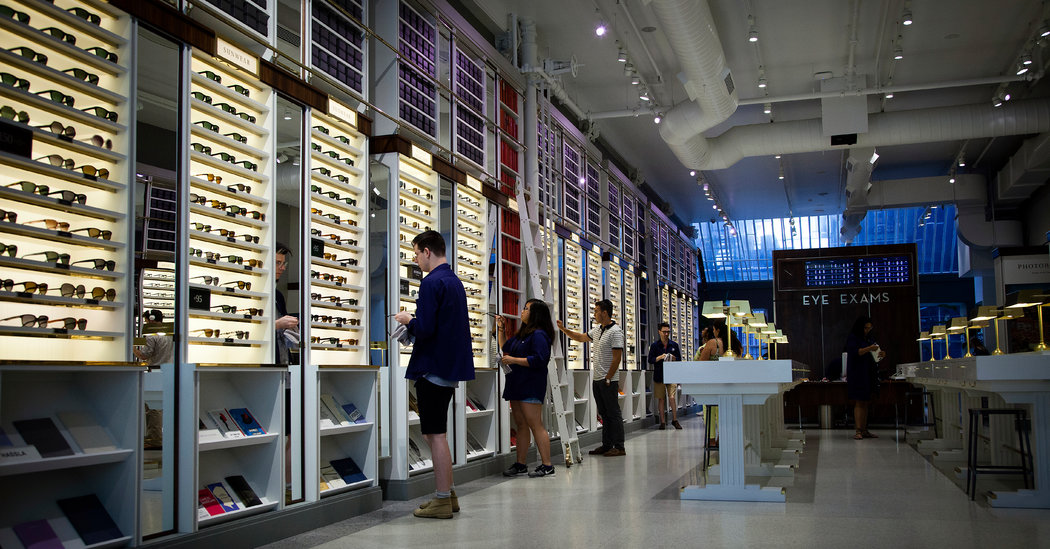 Founded by students at the Wharton School of the University of Pennsylvania, it now has more than 1,400 employees and 65 retail stores in the United States and Canada.

Warby Parker was also an early proponent of shifting beyond selling only online to opening brick-and-mortar stores. Figuring out how to balance e-commerce and physical retailing has become perhaps one of the biggest priorities for retailers around the world. Amazon has bought Whole Foods. Walmart, which has made online sales a priority, has acquired Jet and has devoted enormous resources to digital sales.

Neil Blumenthal, another of Warby Parker’s co-founders, said that the company hopes to focus on pleasing customers rather than sticking to a single way of selling glasses.

“We’re experience-focused but medium-agnostic,” he said.

But technology is a key part of its business. It has added apps that let customers get prescriptions through their smartphones or use the iPhone X’s advanced front-facing camera to pick out which frames are most flattering on their faces. It has also set up an optical lab in Sloatsburg, N.Y., to help produce the lenses for its eyeglasses.

The company has also slowly worked toward attaining profitability. Mr. Gilboa said that 2018 will be the retailer’s first full year of turning a profit.

To help finance its continued growth, however, Warby Parker turned to T. Rowe Price, which had already invested in the company.

That the new round was led by a mutual fund giant known for investing in companies on the verge of an initial public offering may raise questions about whether Warby Parker is finally headed toward the stock markets.

Mr. Blumenthal said that an initial offering is a more likely future step than selling to some bigger company. But he said that there were no immediate plans to pursue a public listing.

“Our objective is to build a brand that will have large-scale impact on the world, and we think being independent is important to that,” he said. “But we don’t have a timeline in place.”