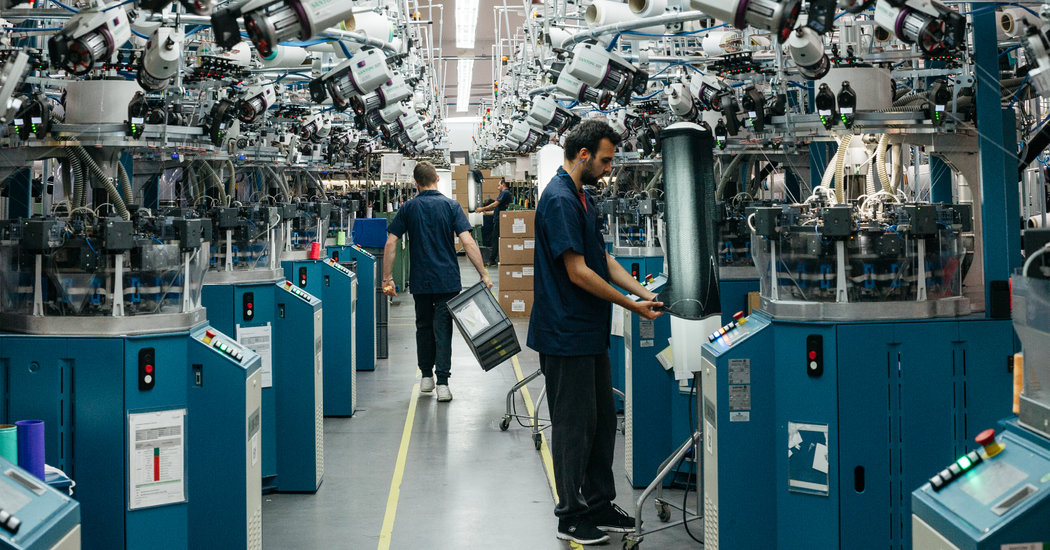 Workers may finally be getting a bigger piece of the economic pie — at least in Europe. Just don’t ask why, or whether it will last.

In the decade since the financial crisis, much of the global economy has recovered and is back on stable footing. Companies are reporting record profits, unemployment levels are plummeting and overall global growth is back on track.

Wages in most developed countries, however, have barely budged.

The economic puzzle has ramifications for global political as well as financial stability. Resentment among middle- and lower-class workers, and the feeling they were not getting a fair share of economic growth, helped elect Donald J. Trump and contributed to the rise of right-wing parties in parts of Europe.

“This is one of the big economic questions of our time,” said Ángel Talavera, lead eurozone economist at Oxford Economics in London.

Europe may offer an exception to that trend. Wages in the eurozone are rising again after years of stagnation, a welcome development not only for working people but also for Mario Draghi, the president of the European Central Bank, who will hold a news conference on Thursday after a meeting of the bank’s Governing Council.

The central bank has been pulling out all the stops to push inflation back toward a level considered healthy for growth. But wage increases are effectively a prerequisite for sustained inflation, and, until recently, the bank had been frustrated by the failure of eurozone citizens’ paychecks to rise along with strong economic growth.

When official data last month showed that hourly wages in the eurozone rose 2 percent in the first three months of 2018 — finally — the central bank got the signal it was looking for. It announced it would end its main stimulus measure at the end of the year. At its meeting on Thursday, the Governing Council is expected to reaffirm that plan.

Yet a mystery remains. Economists have not been able to agree on why pay for most people in the United States, Europe, Japan and other wealthy countries had long been stagnant even as unemployment plummeted. In Europe, experts attribute the spike to an acute shortage of workers in countries like Germany, but there are many other theories.

And because officials don’t know for sure why wage growth recovered in the region, they can’t be sure it’s sustainable. Japan has already seen surges in wage growth that quickly sputtered.

Back in simpler days, falling unemployment usually led to higher wages. Employers had to compete harder for workers, and paychecks rose across the board. Inflation also went up, at least temporarily, as businesses passed on the higher cost of labor to customers.

The Phillips Curve, a graph plotting the inverse relationship between falling joblessness and rising inflation, named for its originator, the New Zealand-born economist William Phillips, was for decades a staple both of introductory economics courses and of monetary policy.

But in recent years the relationship between growth, wages and inflation has become much harder to understand. Economists have devoted enormous energy trying to explain why inflation and wages remained stuck in neutral even as unemployment in countries like Germany fell to record lows.

In a measure of the issue’s importance, the European Central Bank made the interplay of those factors the focus of its annual gathering last month of leading economists in Sintra, Portugal.

Economists there offered numerous theories to explain the phenomenon. The decline of unions has taken away employees’ bargaining power, some said. Globalization, outsourcing, and the easy flow of money and information across borders have also forced workers in wealthy countries to compete with those in poorer ones.

Another suggestion is that the rise of companies like Apple, Google and Amazon as industry behemoths has concentrated power in fewer companies and squelched competition. And the so-called sharing economy, exemplified by Uber or Airbnb, has made many people into freelancers with few benefits.

In one much-discussed paper presented at Sintra, Uta Schönberg, a professor at University College London, compared data from Germany and France and came to the conclusion that low wage growth and rising inequality were a result of diminished bargaining power by workers.

Flat wage growth in Germany during the last two decades coincided with reforms that allowed companies to opt out of collective bargaining agreements, weakening union power. In France, where union agreements applied to whole industries and were binding for companies, wages continued to climb and inequality was less pronounced.

But France paid a price. While unemployment fell below 4 percent in Germany, it remains above 9 percent in France. The implication is that companies may not hire as much if they are locked into union wage contracts.

Professor Schönberg pointed out that pay in Germany has begun rising again, suggesting that the effect of reforms was temporary. At a certain point, low unemployment does still seem to lead to higher wages. It just may take longer than it used to.

That is no doubt what the European Central Bank is counting on. Wages are a key issue for the bank because, by law, its job is to keep inflation at or close to 2 percent. It would be hard to believe that inflation is on an upward trend without an accompanying rise in pay.

Even after five years of steady economic growth, until recently inflation in the 19-nation euro area remained stubbornly below the official target. Consumer prices rose at an annual rate of 1.9 percent in May and 2 percent in June, but the numbers were not very convincing. The increases were due almost exclusively to a steep rise in energy prices, which fluctuate often.

Wage growth “was the key variable we would look at for convergence of inflation,” Mr. Draghi said at a news conference in June after a meeting of the European Central Bank’s Governing Council.

Still, economists are far away from any consensus on why wages have taken so long to rise even when companies gripe they can’t find the people they need.

Mr. Talavera of Oxford Economics argues that unemployment data does not measure large numbers of workers who have given up looking for jobs. When demand for labor recovers, these people join the work force again, acting as a buffer and preventing labor shortages.

This hidden reserve of workers is bigger than economists thought, Mr. Talavera said. But in Europe it appears to have finally been exhausted. “That is one of the reasons you haven’t seen wage growth picking up substantially,” he said.

If he’s right, that should mean that wages will continue to rise.

The fact that low wage growth has afflicted virtually every wealthy country, though, suggests that there are deeper forces at work that are not yet fully understood.

Aviv Nevo, a professor of economics at the University of Pennsylvania, summed up the mood of uncertainty about the dynamics of wages and prices by referring to the idea of the streetlight effect, where researchers look for information only where it is easiest to find, rather than probing further.

During a discussion in Sintra, Professor Nevo said, “We’re all drunks looking under the lamppost.”