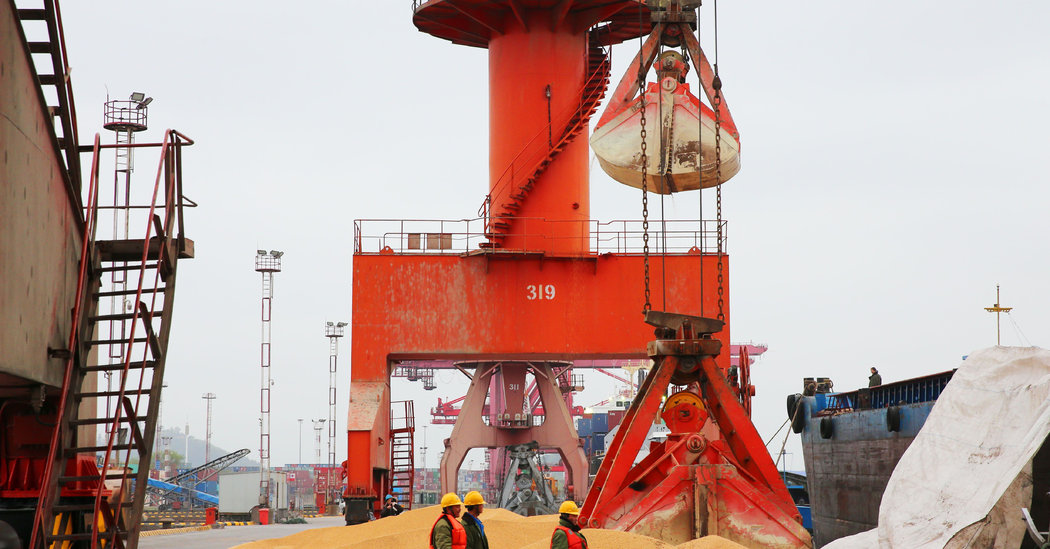 WASHINGTON — The Trump administration escalated its trade dispute with China on Tuesday, saying it would impose tariffs on roughly $200 billion worth of Chinese fish, petroleum, chemicals, handbags, textiles and other products if Beijing does not change its trade practices.

On Tuesday, his administration detailed the next list of products that would face Mr. Trump’s wrath unless Beijing folds to Washington’s demands. The White House is pushing China to reduce its trade surplus with the United States, halt intellectual property theft and open its markets to American companies.

Neither side appears eager to blink first. China has responded to Mr. Trump’s initial tariffs with its own equal amount of levies on American goods like pork, steel, cars and fiber optic cable and has said that it is prepared to continue retaliating.

With no official discussions scheduled to settle the trade dispute, it is unclear how or when the differences get resolved. A senior White House official said on Tuesday evening that the administration welcomed China’s engagement and had been “extremely clear” with China about its concerns over its trade practices, but that China had been “nonresponsive.” The official said that the process of imposing tariffs on the new list of goods would take roughly two months, with a public hearing on the tariffs scheduled for Aug. 20 through Aug 23.

The trade war has already started to raise costs for businesses that depend on international supply chains, from manufacturers to retailers, and consumers that purchase their products. The Trump administration said it intended its first wave of tariffs to target industrial products that the Chinese government subsidizes and to minimize the impact to American households.

But as the list of taxed products grows, the number of consumers and businesses that will feel the pinch also increases.

The administration’s approach has prompted criticism from lawmakers, particularly those from farm states, who say Mr. Trump is approaching a serious issue in an undisciplined way that could backfire.

Senator Orrin G. Hatch, the Utah Republican and chairman of the Senate Finance Committee, said that he supported the administration’s effort to crack down on Chinese practices, but the decision to use tariffs was not the proper response.

“Tonight’s announcement appears reckless and is not a targeted approach,” Mr. Hatch said. “We cannot turn a blind eye to China’s mercantilist trade practices, but this action falls short of a strategy that will give the administration negotiating leverage with China while maintaining the long-term health and prosperity of the American economy.”

The White House administration disagrees. Robert E. Lighthizer, the United States trade representative, said in a statement that the announcement was “an appropriate response.”

“Rather than address our legitimate concerns, China has begun to retaliate against U.S. products,” he said. “There is no justification for such action.”

For now, the limited tariffs combined with a booming economy seem to be having little impact beyond targeted industries.

Goldman Sachs economists estimated this week that the initial tariffs on Chinese goods would reduce the size of the United States economy by a minimal amount, and said they did not expect the White House to follow through on Mr. Trump’s latest threatened tariffs.

But Federal Reserve officials and others are worried about potential damage from a prolonged trade war. Minutes from the Fed’s June meeting show business contacts “indicated that plans for capital spending had been scaled back or postponed as a result of uncertainty over trade policy.”

Goldman economists said in a report earlier this month that, if the broader range of tariffs were actually enacted, it would be more damaging because they would hit Americans more quickly in the wallet than the initial round of tariffs.

Economists have also cautioned that the potential damage to the economy could grow if the trade conflict grows. Eswar Prasad, a professor of international trade at Cornell University, said that it was difficult to see a path to cooling off tensions, especially with the highly charged midterm elections approaching in the United States.

“With China in attack mode as well, additional tariffs risk escalating the trade war to a level from which it is becoming increasingly difficult to envision an exit path,” he said.

A version of this article appears in print on , on Page B4 of the New York edition with the headline: U.S. Warns China of Tariffs On $200 Billion in Goods. Order Reprints | Today’s Paper | Subscribe