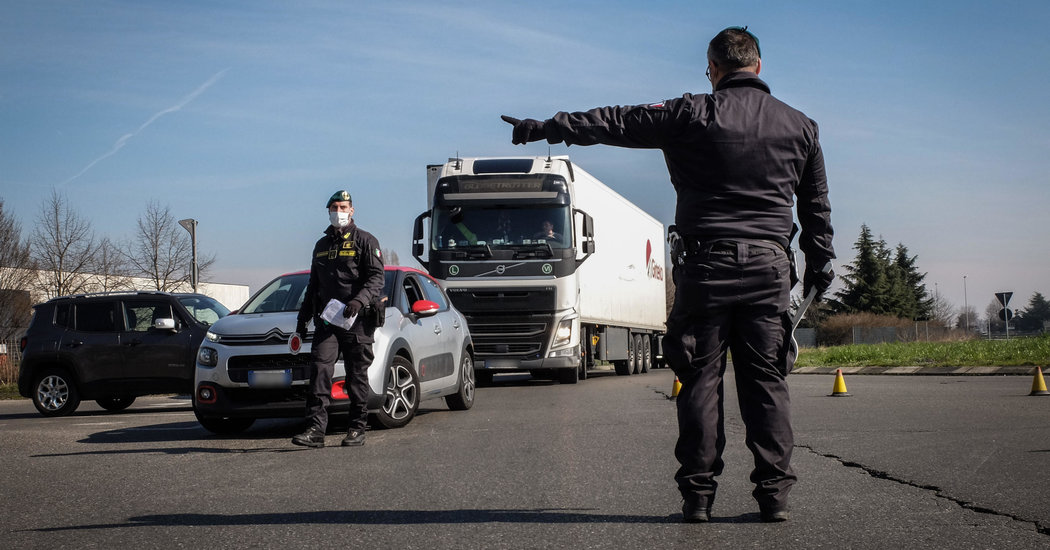 Stocks on Wall Street plummeted on Monday, following sharp declines in global markets after spreading coronavirus outbreaks in Italy and in South Korea stoked concern among investors about the potential damage they might inflict on the global economy.

The S&P 500 dropped nearly 3 percent at the start of trading, after European markets recorded their worst day since 2016 and major benchmarks in Asia closed sharply lower. The Dow Jones industrial average fell more than 900 points.

The number of people infected with the virus has ballooned to more than 79,000 people in Asia, crippling China’s economy. Rapidly spreading outbreaks have now been reported in Italy, Iran and South Korea.

Investors have been on edge since the start of the crisis, because of the role that China’s factories play in global business and because it is a huge consumer market itself. But fresh reports that the virus is not contained are “signaling alarm bells,” a market analyst at Citigroup wrote Monday.

Airline and technology stocks were particularly hard hit. Delta Air Lines and American Airlines were each more than 4.5 percent lower, while shares of Apple — which said last week that the outbreak in China was hurting both its supply of iPhones and demand for it — fell more than 5 percent in early trading.

Oil prices slid as demand for crude waned because of concerns about a widening economic slowdown. Brent crude, the international benchmark, fell nearly 4 percent to about $56.40 a barrel on Monday, as did West Texas intermediate, the main U.S. benchmark, which dropped to about $51.50 a barrel. The lower prices will increase pressure on OPEC and Russia to reduce oil supplies at their next meeting, which is scheduled for early March in Vienna.

Gold, which is viewed as a safe place to invest during market tumult, rose to a seven-year high.

In Europe, major benchmarks were down 3 percent or more. The South Korean market ended 3.9 percent lower, after a surge in coronavirus cases prompted President Moon Jae-in on Sunday to put the country on its highest level of alert. Other Asian markets slid, but not by as much.

An analyst note from JPMorgan warned “the immediate impact of a large China demand and supply shock will be substantial.” The analysts predicted that global G.D.P. would slow to about 1 percent this quarter, but said they expected a strong recovery midyear.

In a commodities report, Citi Research analysts said that the virus’s ripple effect on the global supply chain may be more problematic than expected.