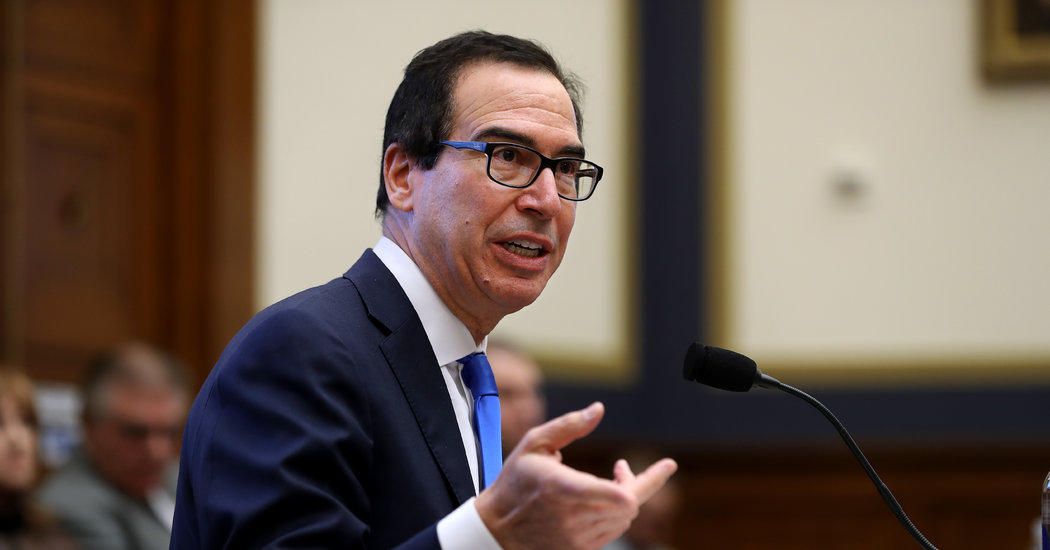 WASHINGTON — The Trump administration has formally objected to the World Bank’s plans to continue lending to China, the latest flash point in a long-running battle between the world’s largest economies.

The objection comes at a delicate moment, as Washington and Beijing try to reach a Phase 1 trade agreement within the next 10 days. President Trump has threatened to impose additional tariffs on about $156 billion of Chinese imports on Dec. 15, a step that would inflame tensions and result in America taxing nearly every product imported from China.

While the two sides continue to negotiate, Washington has begun ratcheting up pressure on China — threatening sanctions over its treatment of Muslims and ethnic minorities and now protesting the World Bank’s financial support of China. The confrontational approach has raised concerns that the trade talks could again be derailed.

On Thursday, Treasury Secretary Steven Mnuchin told lawmakers on the House Financial Services Committee that the United States had objected to the World Bank’s new five-year framework for lending to China and working on projects there.

Mr. Mnuchin said that he would like to see lending to China curbed as income levels there rise and that he was certain the bank’s leader, David Malpass, a former Treasury Department official, was making it a priority to ensure that China received fewer loans.

World Bank lending to China has declined from about $2.4 billion in 2017 to approximately $1.3 billion this year. But Mr. Mnuchin said he wanted to see that level drop even further.

“We negotiated significant reductions in China lending with a path to get below $1 billion,” Mr. Mnuchin said. “Yesterday we submitted our objection to the current country plan.”

The lending reductions that Mr. Mnuchin referred to were negotiated as part of a $13 billion capital increase that the United States reluctantly supported for the bank last year. The World Bank’s shareholders agreed to lending changes that would raise borrowing costs for countries with higher income levels such as China.

A Treasury Department spokesman would not comment on the nature of the objection or whether the United States voted against the plan.

While the United States is the World Bank’s largest shareholder, it does not have veto power over lending to specific countries. On Thursday, the bank said that it was moving forward with its new five-year Country Partnership Framework, despite the concerns from the United States, and that lending would continue to average between $1 billion and $1.5 billion a year.

The international development organization’s work in China has come under intense scrutiny in recent months amid speculation that a $50 million loan it granted in 2015 for an education project was being used to fund Muslim detention camps. In November, the bank said that it found no evidence to support that speculation, but that it was scaling back work on the project.

The Trump administration has taken a hard line on China and has been pushing the World Bank to reduce lending. Many observers expected the organization to change course once Mr. Malpass — whom Mr. Trump selected to run the bank — was installed in the job. However, in his first eight months, Mr. Malpass has defended the merits of the bank’s continuing work with China and steered clear of discussing its trade dispute with the United States.

The Trump administration pressure comes amid growing anti-China sentiment in Congress. Last month, bipartisan lawmakers in the House and the Senate passed legislation that would force Mr. Trump to impose sanctions on China for its treatment of protesters in Hong Kong. This week, the House passed separate legislation that would punish Chinese officials for its abuse of Muslims and ethnic minorities in the Xinjiang region.

Senator Charles E. Grassley, Republican of Iowa and the chairman of the Finance Committee, sent a letter on Wednesday to Mr. Malpass questioning the bank’s continued work in China. On Thursday, Mr. Grassley assailed the bank’s new country framework for China on the Senate floor and said he was introducing an amendment to an appropriations bill that would try to block the World Bank from lending to China.

“I think many Americans would question why so many American tax dollars are going to support low-interest loans to China,” Mr. Grassley said. “I question why a country like China, whose economy has far surpassed the threshold at which it is supposed to graduate from World Bank funding, is still taking loans.”

Representative Anthony Gonzalez, Republican of Ohio, who questioned Mr. Mnuchin about the bank’s work in China, introduced legislation last month that would curb World Bank funding to China by “graduating” it from the World Bank’s International Bank for Reconstruction and Development program, which allows it to take advantage of low-interest loans.

“China’s abuse of the international system needs to be stopped,” Mr. Gonzalez said on Twitter on Thursday.

Congressional pressure poses a problem for the bank because lawmakers have the final say over the United States’ financial contribution and can set conditions on how the money is used. Greater scrutiny over its activities in China also puts Mr. Malpass, who has long called for reduced lending to China, in the difficult position of having to defend the bank’s work there.

“Even though he was a hard-liner at Treasury, he really softened his stance on China at the bank,” said Scott Morris, a senior fellow at the Center for Global Development. “Is he going to go to Congress and say, ‘Sorry you’re wrong; there’s a case for the bank to continue to lend to China’?”

Mr. Mnuchin said he supported the idea of curbing lending to China, but he had studiously avoided weighing in on its human rights practices. Pressed at the hearing about whether he would advise Mr. Trump to sign the House legislation to protect China’s Uighurs, he would not answer. He also denied that he had been slow-walking sanctions on Chinese leaders in response to detention camps in Xinjiang, but would not say why they had not yet been imposed.

“I very much am concerned about human rights issues all over the world,” Mr. Mnuchin said.

Mr. Trump said on Monday that Congress’s human rights legislation had not been helpful for trade negotiations, and Chinese officials have condemned the United States for meddling in the country’s internal affairs. The two countries have been struggling to come to terms on a trade deal, including whether to roll back any of Mr. Trump’s tariffs on $360 billion worth of Chinese goods and how to enforce an agreement.

Mr. Mnuchin said on Thursday that talks between the United States and China remained on track.

“We’re actively working,” Mr. Mnuchin said, noting that there were deputy-level talks on Wednesday evening. “We’re going to get the right deal and we’re not going to be confused about an arbitrary deadline.”

Mr. Trump remained characteristically noncommittal about the final outcome, including whether his Dec. 15 tariffs would go into effect.