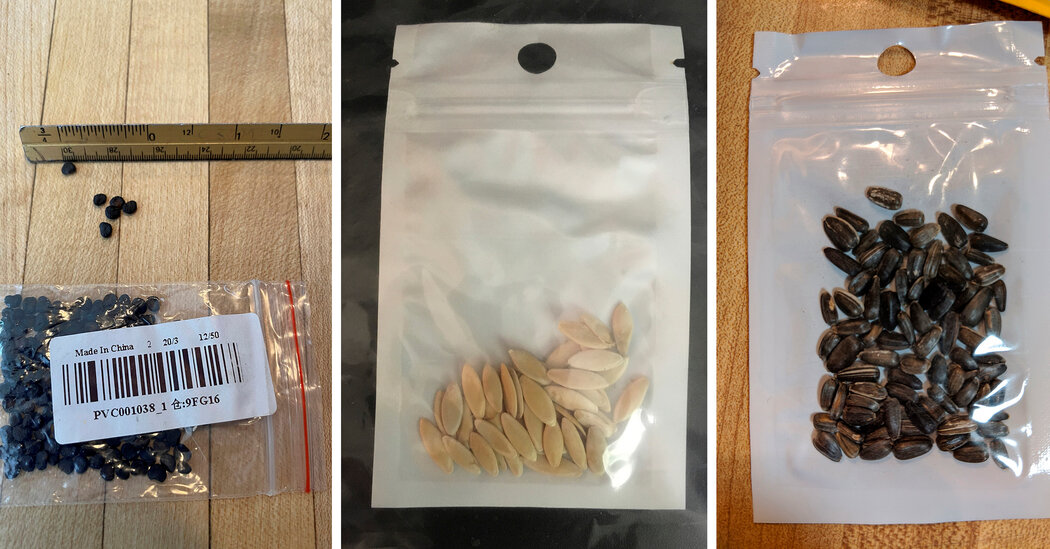 A federal agency said it had identified 14 types of plants from unsolicited packages of seeds that appeared to have been mailed from China, revealing a “mix of ornamental, fruit and vegetable, herb and weed species.”

Among the plant species botanists have identified so far: cabbage, hibiscus, lavender, mint, morning glory, mustard, rose, rosemary and sage, according to the U.S. Department of Agriculture Animal and Plant Health Inspection Service.

“This is just a subset of the samples we’ve collected so far,” Osama El-Lissy, deputy administrator for the service’s plant protection and quarantine, said this past week.

Last month, a number of states reported that residents were getting packages of seeds they did not order.

All 50 states have since issued warnings about the unsolicited packages and the inspection service said it had been sent packets from at least 22 states.

Doyle Crenshaw, of Boonville, Ark., said he had planted some of the unsolicited seeds he got.

“I told my wife, ‘They don’t look like any flower seed I had ever seen,’” he said on Sunday.

The package label read “studded earrings” and “China,” he said.

“It’s a really pretty plant,” he said, describing what grew from the unsolicited seeds. “It looks like a giant squash plant.”

A representative from Amazon could not be immediately reached on Sunday.

Mr. Crenshaw said he called the Arkansas Department of Agriculture and officials were set to come this week to dig up the plant that grew from the unsolicited seeds. He also plans to have them collect another unsolicited package he received — but has not opened — that was labeled to say it contained beads.

After receiving these packages, he said he and his wife will from now on order their seeds locally.

The federal inspection agency said evidence indicates the packages are part of a “brushing scam” in which sellers send unsolicited items in hopes of increasing sales.

Although the risk is low for some nefarious outcome, like introducing an exotic species in the United States or some form of biological warfare, recipients of the mailings should not plant the seeds, said Art Gover, a plant science researcher at Penn State University.

These seeds can be troublesome because they can introduce problematic weeds and diseases, he said.

Lisa Delissio, a professor of biology at Salem State University in Massachusetts, said if any of the unidentified seeds turned out to be invasive species, they could displace native plants and compete for resources and cause harm to the environment, agriculture or human health.

Bernd Blossey, a professor in the department of natural resources at Cornell University in Ithaca, N.Y., said he received a few calls from worried recipients of the seed packets.

“Obviously planting rosemary or thyme in your garden isn’t something that will endanger our environment,” he said. “But there may be other things in there that have not been identified yet. Any time you gain something unknown, my suggestion is burning them, not even throwing them in the trash.”

Gardeners have been responsible for introducing invasive plant species in the past, and nurturing them with a green thumb, including the butterfly bush, Japanese knotweed and some ornamental grasses, Professor Blossey said.

“Who knows who’s behind it or what’s behind it?” he said. “I think there may be more to the story.”