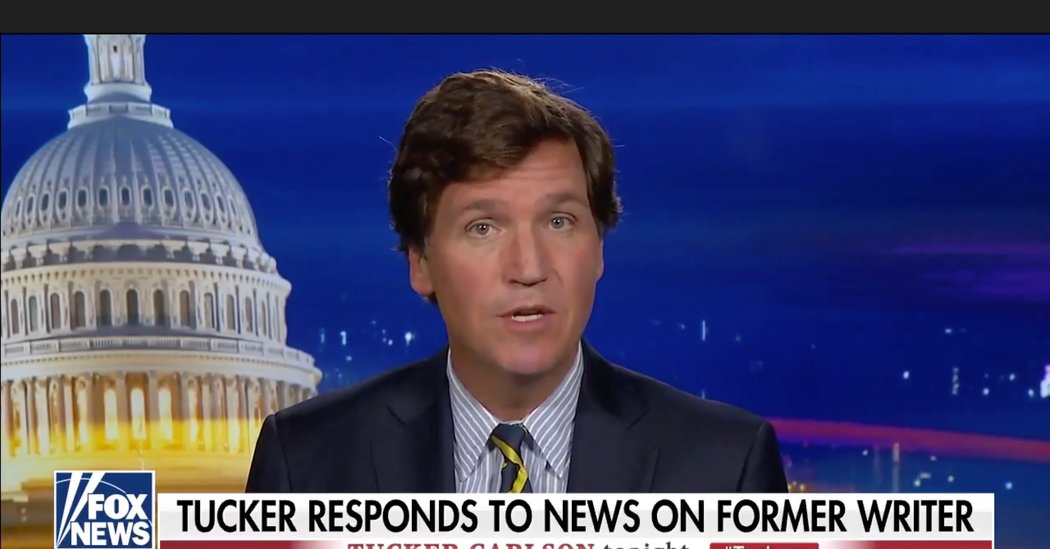 The Fox News star Tucker Carlson said on Monday evening that he would leave on a vacation, starting immediately, days after a writer on his program, Blake Neff, resigned over racist, sexist and misogynist messages that Mr. Neff published anonymously on an online message board.

Mr. Carlson told viewers that he would return to his show next week and described the vacation as “long planned,” suggesting that his time off had been set before the start of a controversy that has swirled around “Tucker Carlson Tonight” since Friday, when Mr. Neff was revealed as the author of the offensive posts.

It was not the first time that Mr. Carlson has abruptly announced that he would take a break from the anchor chair in the immediate aftermath of a sensitive moment for his prime-time program. Last August, Mr. Carlson took a vacation two days after he likened white supremacy to a “hoax,” saying it was “actually not a real problem in America,” remarks that prompted some advertisers to request that their spots be withheld from his show.

In response to an inquiry on Monday, Fox News said that Mr. Carlson’s vacation was “preplanned.”

Mr. Neff, who had written for Mr. Carlson since 2017, resigned last week after Fox News learned of his activity on AutoAdmit, an online forum popular with law students. There, Mr. Neff had written pseudonymous messages that denigrated African-Americans, Asian-Americans and women. Fox News’s top executives condemned Mr. Neff’s conduct as “abhorrent” in a memo to staff and said the show had not previously been aware of his writings.

Mr. Carlson addressed the controversy for the first time on his Monday broadcast. “What Blake wrote anonymously was wrong,” the host told viewers. “We don’t endorse those words. They have no connection to the show.” He also described Mr. Neff as “horrified” and “ashamed” by the revelation of his online writings, which was first reported by CNN.

But Mr. Carlson, who has used his platform to denounce a so-called cancel culture that he says stymies free speech, appended a somewhat defiant note. He said that Mr. Neff “has paid a very heavy price” for his behavior, “but we should also point out to the ghouls now beating their chests in triumph at the destruction of a young man, that self-righteousness also has its costs.”

“We are all human,” Mr. Carlson continued. “When we pretend we are holy, we are lying. When we pose as blameless in order to hurt other people, we are committing the gravest sin of all, and we will be punished for it, there’s no question.”

Mr. Carlson is the top ratings draw on Fox News this year, and his program’s viewership has soared in recent months as he has adopted a sharply critical line against national demonstrations over racial injustice and policing. The host has lamented the outbreak of violence in major cities, calling demonstrators “criminal mobs” and warning that the Black Lives Matter movement could lead to anarchy.

At the end of Monday’s broadcast, Mr. Carlson told viewers that he planned to “spend the next four days trout fishing.”

“This is one of those years where if you don’t get it in now, you’re probably not going to,” the host told viewers, noting that Brian Kilmeade, a co-host of “Fox & Friends,” would sit in for him.

“In the meantime,” Mr. Carlson added, “we hope you have the best and happiest week, and we’ll be back on Monday, if not before.”