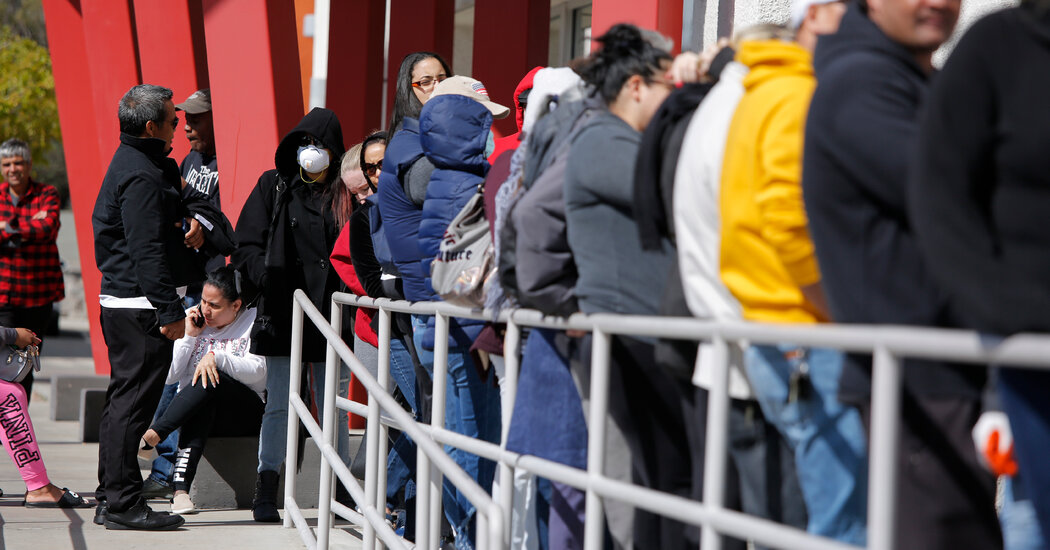 The executive actions President Trump took on Saturday were pitched as a unilateral jolt for an ailing economy. But there is only one group of workers that seems guaranteed to benefit from them, at least right away: lawyers.

Mr. Trump’s measures include an eviction moratorium, a new benefit to supplement unemployment assistance for workers and a temporary delay in payroll tax liability for low- and middle-income workers. They could give renters a break and ease payments for some student loan borrowers. But they are likely to do little to deliver cash any time soon to Americans hit hard by the recession.

Even conservative groups have warned that suspending payroll tax collections is unlikely to translate into more money for workers. An executive action seeking to essentially create a new unemployment benefit out of thin air will almost certainly be challenged in court. And as Mr. Trump’s own aides concede, the orders will not provide any aid to small businesses, state and local governments or low- and middle-income workers.

If the actions signal the death of a congressional deal to provide that aid, economists warn, the economy will limp toward November without the fiscal support that hastened its recovery after its quick dive into a pandemic-induced recession.

The federal government’s aid to small businesses through the Payroll Protection Program was set to expire on Saturday. Executives, trade groups and business lobbyists had pushed hard for a second round of lending — along with new programs to get money to the businesses and industries hit hardest in the crisis — to be included in any congressional stimulus deal. Mr. Trump’s actions do nothing to help those companies.

Low- and middle-income families’ spending power was bolstered in the spring by direct payments of $1,200 per adult that were included in a relief bill Mr. Trump signed into law in March. Lawmakers were pushing for a second round of those checks in a legislative deal. Mr. Trump’s measures will not provide them.

Supplemental unemployment benefits of $600 per week, which expired at the end of July, had been supporting consumer spending at a time when about 30 million Americans are unemployed. Mr. Trump’s memo seeking to repurpose other money, including federal disaster aid, to essentially create a $400-a-week bonus payment is likely to be challenged in court and is unlikely to deliver additional cash to laid-off workers any time soon. It, too, raises questions even if it is deemed legal — for instance, whether states that are already struggling with their budgets will be able to afford the 25 percent contribution that Mr. Trump’s memo says they will need to make toward the new benefit.

Mark Meadows, the White House chief of staff, conceded many of those limitations in an interview set to air Sunday on Gray Television’s “Full Court Press With Greta Van Susteren.”

“The downside of executive orders is you can’t address some of the small business incidents that are there,” Mr. Meadows said. “You can’t necessarily get direct payments, because it has to do with appropriations. That’s something that the president doesn’t have the ability to do. So, you miss on those two key areas. You miss on money for schools. You miss on any funding for state and local revenue needs that may be out there.”

The actions will not even provide the payroll tax cut that Mr. Trump has long coveted as a centerpiece of stimulus efforts. They will simply suspend collection of the tax, as one of Mr. Trump’s longtime outside economic advisers, Stephen Moore, has recently urged him to do. Workers will still owe the tax, just not until next year. And while Mr. Moore has said that Mr. Trump could promise to sign a law that would permanently absolve workers of that liability, there is no guarantee that Congress would go along.

The uncertainty raises a host of questions for companies and workers, including a cascade of intricate tax questions, according to a recent analysis published by Joe Bishop-Henchman of the National Taxpayers Union Foundation. (For example: If workers owe less payroll tax, they would owe slightly more income tax; would employers change, on the fly and in the middle of the year, how much income tax they withhold?) He concluded that most companies were unlikely to take any risks.

“Without detailed answers to some of these questions,” Mr. Bishop-Henchman wrote, “employers might just steer clear of all of it by continuing to do what they’ve always done, blunting the desired economic impact of reducing taxes.”

Outside of Mr. Moore and the conservative group FreedomWorks, which cheered the payroll tax memorandum even before it was announced, few economists expressed confidence that Mr. Trump’s actions would change the trajectory of an economic recovery that has slowed in the last two months as the virus surged anew in many parts of the nation.

Instead, analysts and lawmakers saw politics at play. Republicans said Mr. Trump was forcing Democrats back to the bargaining table and showing Speaker Nancy Pelosi of California and Senator Chuck Schumer of New York, the Democratic leader, that they had overplayed their hands in pushing for a $3.4 trillion aid package.

“I am glad that President Trump is proving that while Democrats use laid-off workers as political pawns, Republicans will actually look out for them,” Senator Mitch McConnell of Kentucky, the majority leader, said on Saturday.

But if negotiations falter now and aid remains scarce for people and businesses, Mr. Trump will be making a political bet: that it is better to tell voters he tried to help the economy than to have actually helped it. Mr. Trump is the president, and he has happily claimed credit for the economy’s performance.

If job growth slows further, and millions of unemployed Americans struggle to make ends meet, he will need to make the case for why the symbolism of acting alone won out over the farther-reaching effects of cutting a deal.