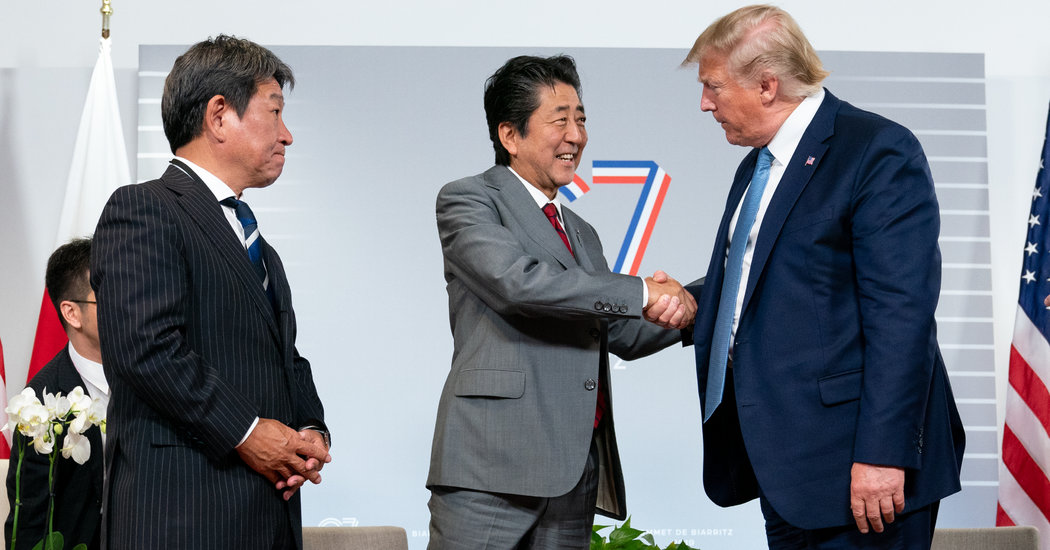 WASHINGTON — President Trump said on Monday that his administration had reached an initial trade agreement with Japan and planned to announce a deal in the coming weeks.

The trade pact is expected to increase access for American agricultural products like beef and chicken to the Japanese market, providing some relief to farmers who have been hurt by Mr. Trump’s trade war with China.

Exact details of the deal have not been released. But people briefed on the negotiations said the pact would lower Japanese tariffs on beef and other American farm products in return for cutting American tariffs on industrial goods like machinery. Unlike most trade deals, the pact is expected to be limited to a few industries.

It is not clear how much protection the deal would offer Japan against Mr. Trump’s threats to place tariffs on its cars, a penalty Japan is eager to avoid. In a letter notifying Congress of its plans Monday, the administration said it would enter into a trade agreement with Japan regarding tariffs, as well an agreement on the rules governing digital trade.

Mr. Trump teased a breakthrough in trade talks with Japan during the Group of 7 meeting in France last month, saying that the two countries were “very close” to a major deal.

“We’re working on a very big deal with Japan, and we’re very close to getting it,” he told reporters after he met with Prime Minister Shinzo Abe of Japan. “It will be one of the biggest deals we’ve ever made with Japan.”

Mr. Abe said the two sides had successfully “reached consensus with regard to the core elements related to agricultural and industrial trade,” but noted that the precise language of the pact was still under discussion.

The administration has been racing to conclude the deal before Mr. Trump travels to New York next week, where he will meet again with Mr. Abe at the United Nations General Assembly.

A deal with Japan would give Mr. Trump a big talking point as he heads into his re-election campaign. Within days of assuming the presidency, Mr. Trump pulled the United States out of a multilateral trade deal — the Trans-Pacific Partnership — that would have given America greater access to Japan’s market. The pact was welcomed by farmers but disliked by many Republicans and Democrats, and Mr. Trump said he would use America’s leverage to cement a better trade deal with Japan.

While Japan initially resisted a bilateral trade deal and instead insisted that the United States rejoin the T.P.P., Mr. Abe ultimately agreed to one-on-one trade talks.

American farmers and ranchers have been pushing for a deal with Japan. But the Trump administration’s deal is likely to address a much narrower range of issues than the T.P.P. would have. American and Japanese officials have been eager to announce an “early harvest” deal that would buoy their partnership, as well as Mr. Trump’s chances at re-election, and then continue on to further negotiations on other industries.