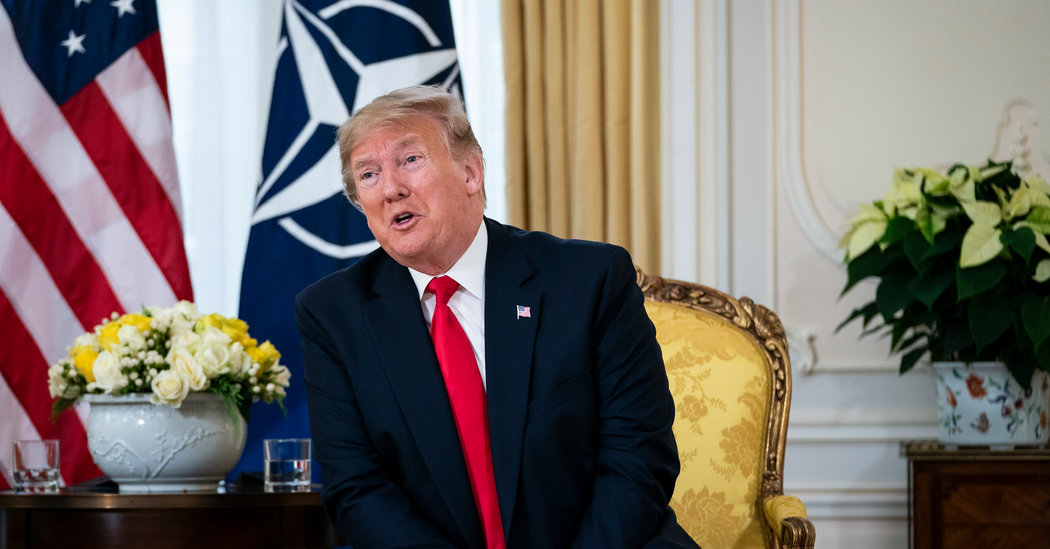 LONDON — President Trump disrupted the global economy on Tuesday when he threatened NATO allies and suggested that he could wait a year to reach a trade agreement with China, sending stock markets swooning.

In comments to reporters sandwiched between meetings with fellow leaders of the North Atlantic Treaty Organization, Mr. Trump said a trade deal with China might not be finalized until after the 2020 presidential election in November. Earlier this fall, he hinted that a deal was near completion, signaling that the trade war could be winding down.

But this week, peace no longer seems at hand. Beyond Mr. Trump’s downbeat assessment of the conflict with China, his administration is considering tariffs as high as 100 percent on French items including wines, cheeses and handbags. He promised to impose tariffs on aluminum and steel from Brazil and Argentina. And he raised fresh doubts about international negotiations that were supposed to defuse a growing conflict over how American technology companies are taxed in Europe.

The president’s affinity for using unpredictability as a negotiating tactic has angered trading partners and at times roiled financial markets — including on Tuesday, when stocks dropped in Europe and the United States after Mr. Trump’s trade comments. The S&P 500 index fell about 0.7 percent Tuesday, after a similar decline Monday.

“In some ways I like the idea of waiting until after the election for the China deal,” Mr. Trump told reporters during a 52-minute appearance in London with Jens Stoltenberg, the NATO secretary general. He added: “But they want to make a deal now, and we’ll see whether or not the deal’s going to be right. It’s got to be right.”

The president also said Tuesday that he might impose new import taxes on goods from Germany and any other NATO ally that did not fully pay its dues to the organization, an inaccurate description of how the military alliance is maintained. Member states are expected to maintain robust military spending, but they do not pay dues.

He then renewed a threat, which his administration made in a formal trade investigation concluded on Monday, to place tariffs of up to 100 percent on some French exports. That would be in response to a new French tax on online economic activity, which will hit American giants like Amazon and Facebook. His administration has threatened similar actions in response to digital tax pushes in Italy, Turkey and Austria.

The threat of such draconian tariffs, which were spearheaded by Robert Lighthizer, the United States trade representative, raised speculation that the Trump administration could abandon the tax talks taking place through the Organization for Economic Cooperation and Development. However, the Treasury Department, which is leading those negotiations, is expected to proceed with them.

The events of recent days seem to have put an end to weeks of relative calm and record highs in the stock market, after more than a year of tumult largely caused by Mr. Trump’s decisions to impose tariffs on a variety of products, including $250 billion of imports from China.

The jolt to the stock market this week stood out after three straight months of placid trading and incremental gains. Measures of global policy uncertainty, while still historically elevated, had dipped this fall as Mr. Trump suggested a breakthrough with China was near. Farmers, who have been hurt by Chinese retaliatory tariffs against the United States, had reported a surge of economic optimism in November, according to an index compiled by Purdue University.

While some analysts argued that Mr. Trump’s bravado was a negotiating tactic that markets should ignore, others said the falling stock prices were a sign that investors had been too optimistic about the trade war. European leaders warned that they would retaliate if Mr. Trump levied tariffs on French goods, blaming him for escalating what is becoming a multinational fight over the taxation of tech companies. Some economic forecasters warned that Mr. Trump was risking the health of the global economy.

“It is remarkable how President Trump seems impervious to the delicate state of an economic expansion that is clearly long in the tooth,” Bernard Baumohl, the chief global economist for the Economic Outlook Group, wrote in a research note. He called Mr. Trump’s trade remarks “disheartening to say the least.”

“We want and need to see a deal as soon as possible,” said David French, the senior vice president for government relations for the National Retail Federation. “The tariffs continue to hurt U.S. businesses, workers and consumers and are a substantial drag on the U.S. economy.”

But delaying a China deal could have political benefits for Mr. Trump, some analysts said.

“Any deal reached now will be subject to scrutiny for the next 12 months and the harsh disinfectant of sunlight during the general election cycle,” said Henrietta Treyz, the director of economic policy research at Veda Partners, an investment advisory firm. “Trade wars are political — right now, President Trump has the benefit of widespread bipartisan U.S. voter opposition to China and a robust consumer spending cycle.”

Mr. Trump’s trademark volatility was on full display Tuesday. At points, he seemed to suggest tensions with trading partners like France and even the long standoff with China could be easily resolved. At others, he suggested that he would make final deals only when he felt like it, and that more tariffs could be on the way in the interim. At one point, he said he would not settle for an “even” agreement with China — only one that favored the United States.

Administration officials sounded increasingly pessimistic that a first phase of any China deal would be reached anytime soon.

Commerce Secretary Wilbur Ross said on Tuesday that he believed holding off on a deal until after the election would give Mr. Trump more leverage in negotiations — assuming he won.

“Because once the election occurs — and the president seems to be in very good shape for the election — once it occurs and he’s back in, now that’s no longer a distraction that can detract from our negotiating position,” Mr. Ross told CNBC.

Mr. Ross said that the agreement in principle that Mr. Trump promoted in October was at the “40,000-foot level,” but that coming to terms on details such as what American agriculture products China would buy and how the deal would be enforced had proved to be more challenging. He said that barring a breakthrough, additional tariffs scheduled to be imposed on Dec. 15 would go into effect.

“We don’t have a breakthrough until it’s in black and white, on paper — signed, sealed and delivered,” he said.