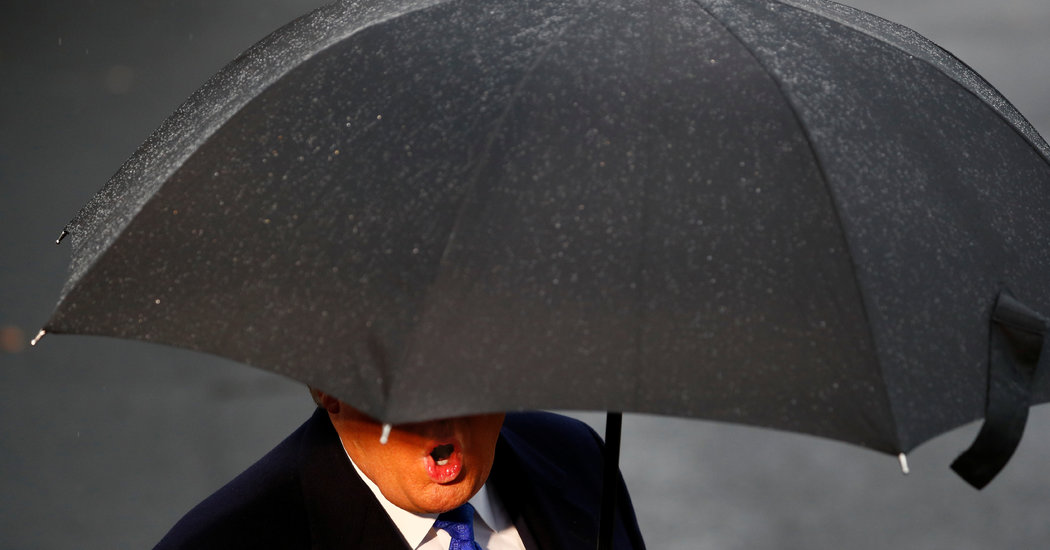 A return of Trump’s tariff threats

With next year’s election approaching, hopes that President Trump would scale back his trade wars were running high this fall. That optimism dissipated yesterday when Mr. Trump proposed imposing duties on French goods over a tech tax and adding tariffs on steel from Brazil and Argentina, showing that “no one is safe” from his tariffs.

The threats stunned Wall Street and suggested that Mr. Trump had not abandoned his confrontational approach, writes Ana Swanson in the NYT.

• “If they are imposed, the tariffs stand to do considerable damage to South America’s two biggest economies as Argentina is in recession and Brazil confronts high unemployment and anemic growth,” Ms. Swanson writes.

A new French tax on digital services discriminates against the U.S., the Trump administration said later in the day, the NYT’s Jim Tankersley and Ms. Swanson report.

Administration officials recommended tariffs as high as 100 percent on certain French imports valued at $2.4 billion, including cheese, wine and handbags. The announcement followed a monthslong investigation into the French tax, which affects American technology companies like Facebook and Google.

The trade woes continued when the W.T.O. ruled that Europe’s aid to Airbus still ran afoul of global trade rules, prompting the U.S. to say that it could increase retaliatory tariffs on European products, Reuters reports.

More: The commerce secretary, Wilbur Ross, warned that time was running out for the U.S. and China to strike a deal. The Chinese state news media hinted of a blacklist of “unreliable entities” that could threaten trade talks. And stocks fell in Asia as the tariff threats renewed gloom among investors.

The Chinese authorities are testing the rules of science, and have received some help from the West.

With a million or more ethnic Uighurs and others from predominantly Muslim minority groups swept up in detention centers across China’s western frontier, officials in Tumxuk have gathered blood samples from hundreds of Uighurs, Sui-Lee Wee and Paul Mozur of the NYT report. The samples were taken as part of a mass DNA collection effort that raises questions about consent and how the data will be used.

There is a partial answer: Chinese scientists in Tumxuk are trying to find a way to use DNA samples to create images of a people’s faces.

The technology, which is also being developed in the United States and elsewhere, is in its early stages and can produce rough pictures good enough to narrow a manhunt or eliminate suspects form inquiries.

Ethics experts worry that China is building a tool that could be used to justify and intensify racial profiling against Uighurs.

It may be possible for Beijing to feed images produced from DNA samples into the mass surveillance and facial recognition systems that it is building, experts say.

Some of this research is taking place in labs run by China’s Ministry of Public Security, and at least two Chinese scientists working with the ministry on it have received funding from respected European institutions.

A lab associated with the research relied on software made by Thermo Fisher Scientific, a Massachusetts company. Thermo Fisher announced in February that it would suspend sales to the region.

Despite the many battles the tech industry has been drawn into in recent years, tech companies have largely avoided legal consequences, thanks to a landmark 1996 law — Section 230 of the Communications Decency Act — that protects them from lawsuits.

Now, that federal law has a new threat: Annie McAdams, a personal-injury lawyer in Houston, Jack Nicas of the NYT reports. With lawsuits in several states, Ms. McAdams has accused Facebook and other tech companies of facilitating the sex trafficking of minors.

Ms. McAdams has found some early success. This year, a Texas judge has repeatedly denied Facebook’s motions to dismiss her lawsuits.

Section 230 states that internet companies are not liable for what their users post. Ms. McAdams argues that, in the case of pimps using Facebook and Instagram to lure children, separate laws require Facebook to warn users of that risk and do more to prevent it.

• “If you sell a lawn mower and the blade flies off and chops someone in the leg, you have the responsibility to fix it and warn people,” she said. “Nowhere else has an industry been afforded this luxury of protection.”

Facebook has “zero tolerance for any behavior or content that exploits children on our platform,” a spokeswoman for the company told the NYT.

More: Facebook is trying a tool in Ireland that would allow users to move photos and videos to Google.

Opinions on ‘Medicare for all,’ shaped by lobbyists

The U.S. health care industry is working at many levels to make sure the country doesn’t make wholesale changes to its medical system.

Lobbyists either helped draft or made extensive revisions to opinion columns by three state lawmakers in a way that warned against the dangers of Medicare-for-all and other government involvement in health care, according to emails obtained by the WaPo.

• A Montana state representative, Kathy Kelker, and State Senator Jen Gross, both Democrats, acknowledged that editorials they had written about the single-payer health proposal included language provided by John MacDonald, a lobbyist and consultant for the Partnership for America’s Health Care Future. That multimillion-dollar industry group, started last year, is funded by hospitals, private insurers, pharmaceutical companies and other private health care firms.

• And an aide to an Ohio lawmaker, State Senator Steve Huffman, a Republican, confirmed that an op-ed by the lawmaker that criticized Medicare for all had been written with the help of Kathleen DeLand, an Ohio-based lobbyist.

• None of the legislators’ columns disclosed that they had been written with help from a lobbyist.

The nonprofit advocacy group Medicare for All Now, which supports the single-payer system, provided the documents to the WaPo. The group used Freedom of Information Act requests to acquire the documents.

How the income gap has widened in larger cities

In 1980, wage inequality in Binghamton, N.Y., made the region among the most unbalanced in the country, the NYT’s Emily Badger and Kevin Quealy report. Highly paid workers there earned about four and a half times what low-wage workers did, a gap larger than that in metro New York.

But income inequality is much higher in New York today than in Binghamton. That divergence over the past four decades speaks to the trend that has been taking place across the country.

Economic inequality has been rising much more quickly in the booming places that promise hefty incomes to engineers, lawyers and innovators. And those places are the largest metropolitan areas in the country. Ms. Badger and Mr. Quealy report.

• “Thriving and stagnant places are pulling apart from each other. And within the most prosperous regions, inequality is widening to new extremes. That this inequality now so clearly correlates with city size — the largest metros are the most unequal — also shows how changes in the economy are both rewarding and rattling what we have come to think of as ‘superstar cities.’”

• “In these places, inequality and economic growth now go hand in hand.”

• U.S. private equity firms, flush with record amounts of cash, are struggling with how to spend it. And pension funds fear that private equity has hit its peak after a decade of double-digit returns. (WSJ, Bloomberg)

• Michael Hintze made his fortune on judgment calls, and the billionaire investor now has an eye on a quantum computing. (Bloomberg)

• Activist investors are demanding change at some of France’s biggest companies. (FT)

• President Trump’s re-election campaign said yesterday that it would bar Bloomberg News journalists from its rallies and political events. (NYT)

• A company that Mr. Trump urged military officials to hire for border wall construction has been awarded a $400 million contract. (WaPo).

• The Republican donors Robert and Rebekah Mercer gave more than $12 million to conservative causes last year despite distancing themselves from Mr. Trump. (CNBC)

• The Treasury Department issued new rules on two major pieces of the 2017 tax law that will lessen the exposure of U.S.-based multinationals. (WSJ)

• A Republican report argued that President Trump was acting on “genuine and reasonable” skepticism of Ukraine when he pressed the country for investigations of his Democratic rivals. (NYT)

• A former top Ukrainian official said she knew in July that the U.S. had frozen military aid to her country, a crucial piece of information in the impeachment hearings. (NYT)

• As Britain heads toward a general election on Dec. 12, Jeremy Corbyn and his Labour Party are pushing proposals to rewrite the rules of Britain’s economy. (Bloomberg)

• The E.U. is set to overhaul its economy in an ambitious push against climate change. (Bloomberg)

• The F.B.I. warned that the popular FaceApp and similar products could be exploited by the Russian government. (WSJ)

• Where the Dow would be this year without Apple and Microsoft. (CNBC)

• Some of China’s wealthiest tycoons who steered billions of dollars into electric-car companies may face a reckoning as car sales slow and the government reduces subsidies for the nascent industry. (Bloomberg)

• The U.S. has evolved from an industrial superpower into a champion of the global services economy, but its dominance is weakening. (WSJ)

• PG&E failed to adequately inspect and maintain its transmission lines for years before a faulty line started the deadliest fire in California history, a state investigation has found. (WSJ)

• UniCredit plans to bolster share buybacks with a proposal that will eliminate 8,000 jobs. (Bloomberg)

• Goldman Sachs is seeking to rebrand itself as wealth takes center stage in the Democratic presidential race. (WaPo)

• The rise and fall of WeWork and its founder will get the feature film treatment. (THR)

• Could a shortage of french fries be around the corner? Cold, wet weather damaged potato crops in the U.S. and Canada, leading to tight supplies. (Bloomberg)

• Cyber Monday sales were on course to bring in a record $9.2 billion for U.S. retailers, according to estimates. (Reuters)

• Delivery companies like UPS and FedEx are confronting a holiday problem they haven’t faced in years: how to deliver millions more orders in fewer days. (WSJ)

Thanks for reading! We’ll see you tomorrow.