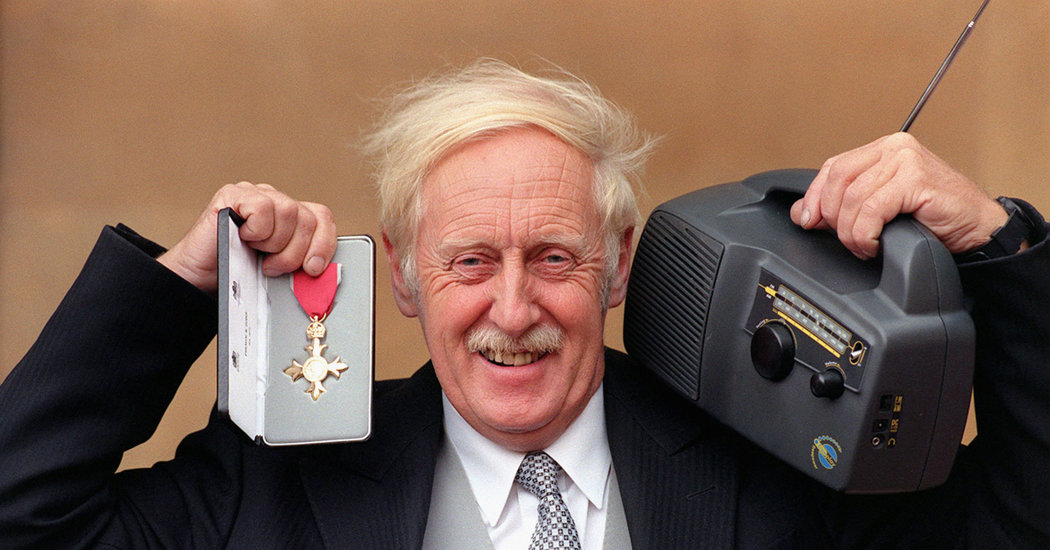 Later he or the company adapted the elbow-grease concept to other uses, like powering flashlights and charging cellphones. And, Mr. Bunting said, Mr. Baylis’s idea influenced others.

“Although the original clockwork technology was overtaken subsequently,” he said by email, “it triggered the idea that renewable technologies could be used to bring benefits in places where more conventional power sources were not available or too expensive.”

In 2003 Mr. Baylis, partly because of the frustrations he had encountered, created Trevor Baylis Brands to help other inventors develop their ideas and, just as important, protect them.

“I want to make sure that when the money rolls in, he or she is not rolled out,” he said in a 2012 interview. “We have to entice people to have a go.”

In 1998 he told The Daily Mail that when he was 6 he was raped by a curate at his church.

“What happened made me arrogant and insular,” he said. “I am impervious to other people’s opinions. It made me self-reliant and independent, and you need to be like that to be an inventor.”

The family was not well off when he was young, so he did odd jobs to help out, including, at age 9, working a milk route with a horse and cart.

“I remember that the horse, Gip, knew exactly where to drop off the milk,” he told The Telegraph in 2015. “She was marvelous.”

He left school, but while working in a soil mechanics laboratory in Southall as a teenager he began studying engineering part time at a local technical college. After serving in the Army, Mr. Baylis, an excellent swimmer, sold swimming pools, sometimes diving from 10 feet into shallow water as part of the sales pitch. For a time he also worked in the Berlin Circus as an underwater escape artist.

The human-powered radio was far from his first invention. Earlier in his eclectic career he had a particular concern for the needs of people with disabilities, which inspired him to invent dozens of devices, like a bottle opener designed to be used with one hand.

Mr. Baylis said it took him only about a half-hour of fiddling in his workshop to come up with a working version of a hand-powered radio, but turning the idea into a product took quite a lot longer. None of the electronics manufacturers he wrote to were interested.

It wasn’t until he told his story and spoke of his frustrations on the BBC series “Tomorrow’s World” in 1994 that an entrepreneur, Chris Staines, became involved, setting up a factory in South Africa under the name BayGen that was staffed by people with disabilities. A 1995 television program chronicled Mr. Baylis’s introduction to that facility.

“Trevor burst into tears when he walked through the door,” a reviewer for The Independent wrote of that program, “so that much of what he said subsequently was subject to sniffly interference, as if his own mainspring was winding down. You gathered that he was happy and proud — and justifiably so.”

Later that year Reuters reported that 60,000 of the radios had already been ordered by aid organizations operating in Rwanda, and BayGen said the radios would also soon be in use in Bosnia, which was then in the midst of a war. Today, renamed Freeplay Energy, the company has products aimed at the developing world, emergency preparedness providers and the outdoor leisure market.

Mr. Baylis, who leaves no immediate survivors, became a sought-after speaker. In 1997 he was admitted to the Order of the British Empire, and in 2015 he was given the designation Commander of the British Empire. In his later years he put much of his effort into advising other inventors through Trevor Baylis Brands. His autobiography, “Clock This: My Life as an Inventor,” was published in 1999.

In 2000, Mr. Baylis walked 100 miles across the Namib Desert in southwest Africa — partly for a charitable cause, but also to demonstrate a new invention, electric shoes. A pouch on the side of the shoe held electronic gear that generated electricity from the walking motion.

The next year, though, a terrorist tried to blow up an American Airlines plane with a shoe bomb, and Mr. Baylis acknowledged that the incident had created a marketing problem for his electric shoe.

“The only trouble is that having a pouch full of electronics on the side of the shoe invites you to have four bullets in the brain,” he told TechWeekEurope, “because they think you might be a shoe bomber. Try going to an airport wearing one of those!”