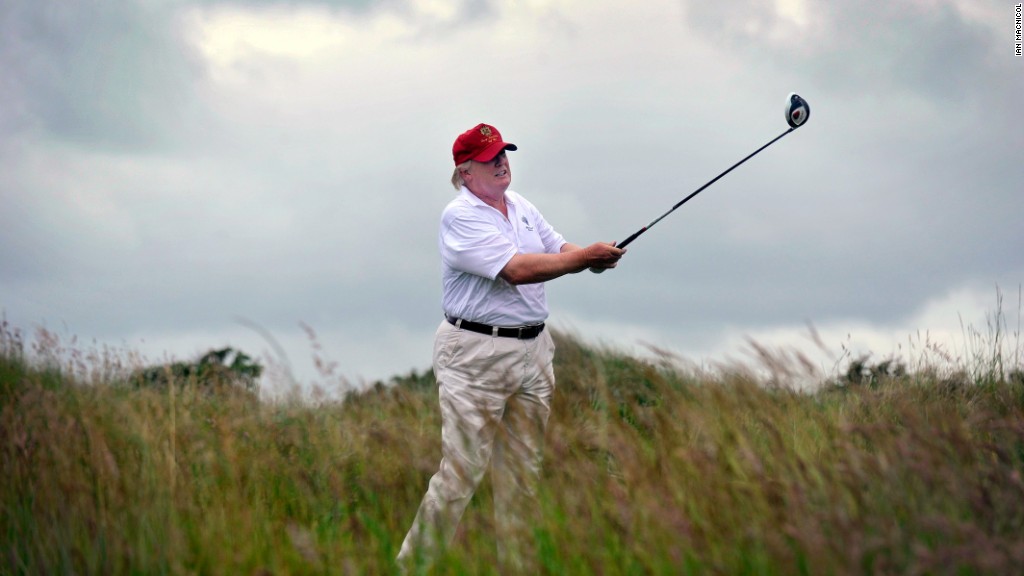 Trump was again seen at the course Saturday after being spotted there Friday, viewing the festivities from a glass-encased viewing area. The tournament is scheduled to end on Sunday.

Protesters planned to converge on the event because it’s being held at Trump National, the president’s private golf club in Bedminster, New Jersey.

Demonstrators were kept at least three miles from the course. They were met by a roughly equal number of Trump supporters.

Players faced uncomfortable questions from reporters earlier this week about Trump, and at least four U.S. senators called for the United States Golf Association to move the tournament, three of them citing the president’s “pattern of degrading and dehumanizing women.”

The USGA, which awarded the tournament to the Trump course in 2012, declined to move it.

“The USGA is a golf organization, and we make decisions about where to play based, first and foremost, on the quality of the golf course, as well as the competition, fan experience, and overall operations,” the organization told CNNMoney.

Trump has spent considerable time since taking office at his golf clubs, including a few weekends at Bedminster.

Related: How the shocking hot mic tape of Donald Trump was exposed

UltraViolet, a national feminist group, carted a truck-mounted billboard circle to the course on Saturday.

The group says it plans to have demonstrators hold signs at the entrance to the course on Sunday.

UltraViolet co-founder Shaunna Thomas told CNNMoney earlier this week that holding the tournament at the Trump course is unfair to the players.

“There’s something inherently shocking in forcing women golfers to play on a course owned by Trump, who has made such sexist comments,” she said. “We feel terrible for the players themselves who are caught in the middle of it.”

In October, Senators Bob Casey of Pennsylvania, Ed Markey of Massachusetts and Richard Blumenthal of Connecticut, all Democrats, expressed their concern, too. In a letter to the USGA, they said Trump’s pattern of degrading women “has occurred over decades.”

That same month, another Democrat, Senator Bob Menendez, whose home state includes the Trump course, said, “No one understands better than New Jerseyans the pitfalls of doing business with Donald Trump.” He asked the USGA to move the tournament to another New Jersey course.

Menendez’s office said this week that he had no additional comment. The other three senators did not respond to requests for comment.

The USGA has stressed that Trump has done a lot for women’s golf. “The Trump Organization has been a stellar host, and we’re excited about this week from all standpoints,” Stuart Francis of the USGA executive committee told reporters this week.

At a press event, the golfers themselves were asked by reporters how they felt about playing the Trump course in light of Trump’s remarks. They said they did not want to venture into politics.

“I take my role as a female role model very seriously, but this week is about the golf,” Michelle Wie said.

The most colorful response came from Danielle Kang, who shared a memory from 2009, when she played the course as a junior golfer. She said she received Trump-branded swag and a little Donald Trump doll in her locker for doing well.

But Thomas, from the UltraViolet group, said that many of the golfers privately agreed with the organization’s stance.

“They sneak over to a person holding a sign and say thank you,” Thomas said. “Some are really cynical about it. They say, ‘I agree with you, but it’s never going to be moved.'”

On Tuesday, a panel of USGA directors was asked at a press conference about the organization’s stance on sexual assault. No one on the panel responded. Instead the moderator said the question could be addressed privately after the panel.

Later, the USGA said in a statement:

“The USGA has a longstanding policy on harassment. This policy governs not only the conduct of our employees, but safeguards staff, players and fans at all USGA events. Our Staff Code of Conduct prohibits any workplace harassment, including but not limited to, sexual harassment or sexual assault. These policies like all of our contractual agreements, are confidential.”

–CNN’s Kevin Bohn and Lauren Delvalle contributed to this report