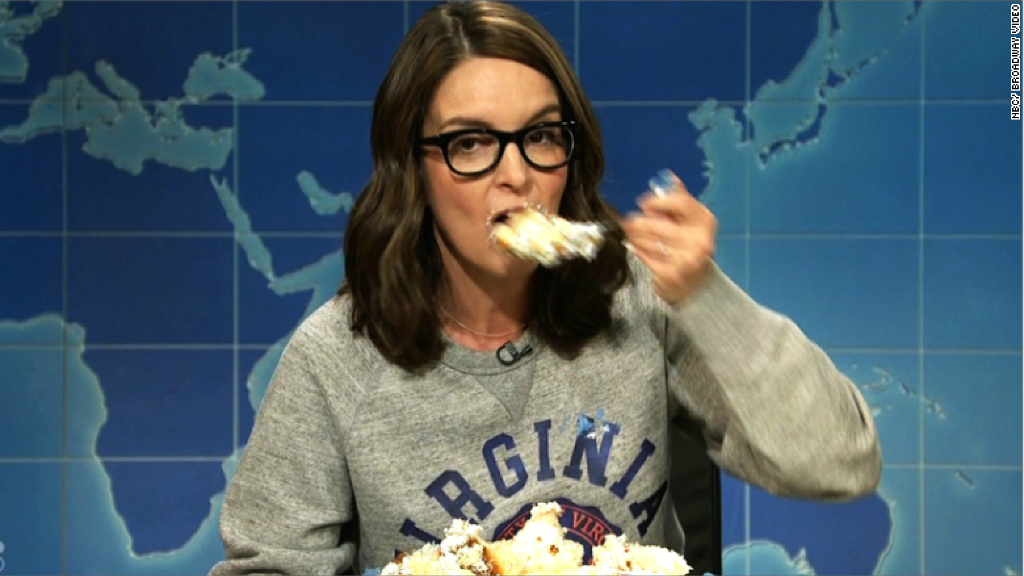 She criticized President Trump for his failure to call out white supremacists and neo-Nazis whose rally in Charlottesville, Virginia, led to the death of a woman protesting the rally. After the tragedy, Trump called out both the national supremacists and the left-wing protesters.

“Donny John comes out and says that he condemns violence on many sides,” Fey said. “I’m feeling sick cuz you know I’ve seen ‘Raiders of the Lost Ark’ and I wasn’t confused by it. … Nazis are always bad.”

She then encouraged Americans to support locally-owned minority businesses like a “Jewish-run bakery” or an “African American-run bakery” by ordering a sheet cake with the American flag on it.

Fey then devoured a cake she purchased in support, while screaming her feelings into it in a process she dubbed “sheetcaking.”

“Who drove the car into the crowd? Hillary’s emails?!” Fey shouted mid-bite.

Fey also talked about the nine national supremacist rallies that were planned for cities across the U.S. in the wake of the last week’s attack, one of which is scheduled to take place in New York City.

“Part of me hopes these neo-Nazis do try it in New York City, like I hope they try it and get the ham salad kicked out of them by a bunch of drag queens,” Fey said. “Cuz you know what a drag queen still is? A six-foot-four black man.”

“Treat these rallies like the opening of a thoughtful movie with two female leads — don’t show up,” Fey said. “Let these morons scream into the empty air. ”