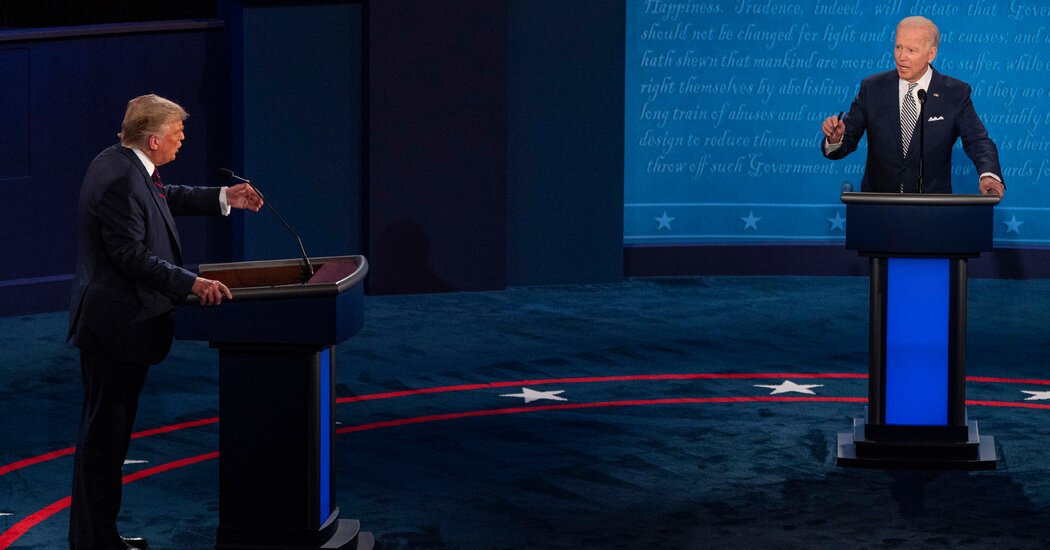 Cable viewers witnessed a rather exotic TV moment Tuesday night, when the CNN analyst Dana Bash broke out a profanity to describe the presidential debate.

For those who watched the event on Twitch, such a remark would have passed unnoticed.

Scorching-hot analysis and salty talk were typical of the takes offered on the Amazon-owned digital platform, whose webcammers attract devoted followings partly through their ability to keep up an entertaining patter as they livestream themselves playing marathon sessions of Fortnite and other games.

Hundreds of thousands watched the debate in the digital company of popular Twitch streamers like Mizkif and xQcOW. Wearing headsets equipped with microphones as usual, the hosts positioned themselves in front of screens showing the 90-minute matchup between President Trump and Joseph R. Biden Jr., rather than League of Legends.

The names they gave to their debate livestreams set the tone. A streamer known as Valdudes called it “Presidential Debate Cringefest 2020.” “Chapo Trap House,” a podcast, billed its Twitch livestream “Sundown Showdown 2020”

As Mr. Trump and Mr. Biden spoke over each other, the webcammers chimed in with sometimes rude commentary. Their fans responded by tapping out messages in a live-chat scroll.

Twitch hosts who are accustomed to voicing visceral reactions while narrating their gaming sessions also went with the watch-and-blurt style on Tuesday night.

Shaun Hutchinson, a streamer called Hutch who has 350,000 followers and is known for playing first-person shooter games like Call of Duty, occasionally heckled the candidates. “Interrupt him! Interrupt him!” he shouted while gesticulating with a fork. At one point, unhappy with Chris Wallace, the debate moderator, he hollered, “Moderate!”

Armchair analysts on other Twitch channels scarfed down pizza, smoked cigars and swigged beer. On the “Chapo Trap House” Twitch channel, which has nearly 63,000 followers, one host commented that following the debate “is like trying to watch a subtitled movie when you’re drunk.”

Hasan Piker, a political commentator who streams on Twitch as HasanAbi, had 125,000 viewers watching his livestream at one point during the debate. When Mr. Trump accused the news media of preferring Mr. Biden, Mr. Piker told his audience: “What did I tell you guys? He’s literally hitting the same note he’s been practicing in his tight five on all of his campaign stops. He’s just repeating the same line.”

Twitch has tried to recruit nongamers in an attempt to position itself as a hub of discussion on culture, cooking, politics and more. Viewers watched five billion hours of Twitch content in the second quarter of 2020, up 83 percent from a year earlier, according to a report from the software service Streamlabs.

Nearly 52,000 of those people follow David Pakman, who had a relatively restrained approach to covering the debate on Twitch. Mostly, he listened as the candidates shouted over each other. Shortly before 10 p.m., with more than half an hour left, he seemed ready to give up.

“This is the downfall of American democracy, people,” he said. “I really should turn it off. This is sad.”