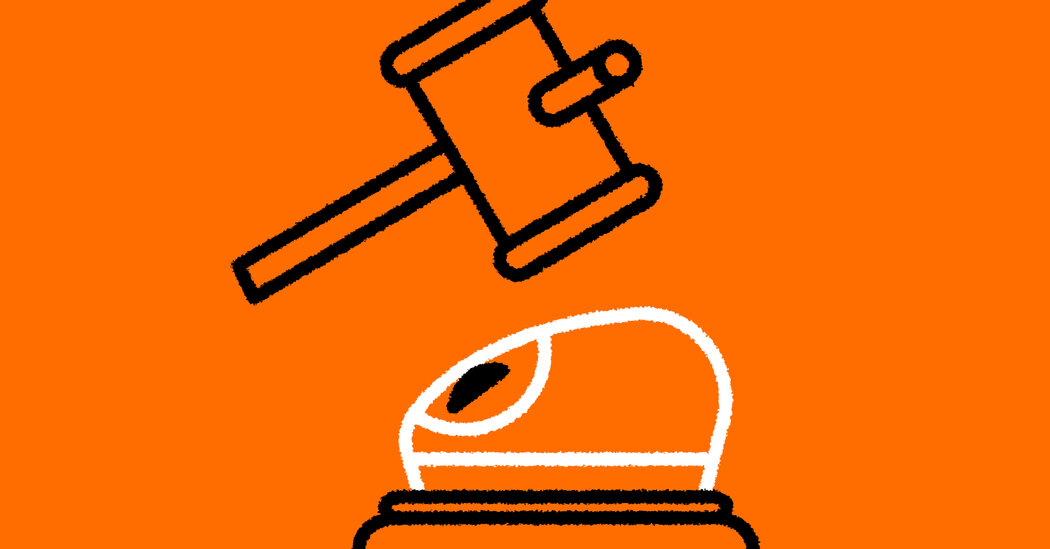 Welcome to August, everyone. I’m on vacation next week, escaping the subtropical zone of Brooklyn for the sanity-restoring woods of Vermont, so Gillian Friedman will be filling in. Until then, here’s what you need to know in business and tech for the week ahead.

Appalling new data shows just how badly the pandemic has devastated the United States economy: Gross domestic product shrank 9.5 percent, or 32.9 percent at an adjusted annual rate, in the second quarter of this year, according to a report from the Commerce Department. It’s the most severe collapse in the 70-plus years that G.D.P. statistics have been compiled, and wiped away nearly five years of economic growth. If the virus were now under control, the dive could prove to be temporary. But with cases surging in many states, a quick comeback is looking less and less likely.

No Mask, No Service

The science is clear that masks help slow the spread of the coronavirus and allow people to shop and go out in public more safely. That’s why many big businesses, most recently McDonald’s, are requiring customers to wear them. But there’s a wrinkle: Enforcement is tricky. Stores like Walmart have appointed “health ambassadors” to remind customers to put on masks before entering, but if someone refuses, what is the employee going to do? Confront the person and get breathed on? No thanks. Many businesses are struggling to contend with this loophole, which affects the safety of other customers as well as employees.

The chief executives of the tech industry’s “Big Four” — Amazon, Apple, Facebook and Google — faced a blistering round of questions (via video, awkwardly) from a congressional antitrust panel on Wednesday. The hearing was a culmination of a yearlong investigation into monopolies in the digital market, and those in the hot seat — Jeff Bezos, Tim Cook, Mark Zuckerberg and Sundar Pichai — struggled to defend claims that their companies had broken antitrust laws by exploiting their size to consolidate power and thwart rivals. Lawmakers vowed to tighten regulations, but how they’ll do that remains to be seen. And the companies continue to rake in money as the pandemic makes consumers more reliant on digital services. Apple, Amazon and Facebook all reported blockbuster revenue this past week, and Google reported better earnings than expected.

Congress may talk a big game about reining in big tech, but European Union leaders are actually doing it. In the past, European officials have been notoriously aggressive about trying to hit American tech companies where it hurts — with higher taxes and business restrictions — with varying success. Now, they are pursuing a handful of new laws that would narrow the scope of what digital businesses can do and sell. One would make it illegal for Amazon and Apple to steer customers toward their own products instead of those made by rivals. Another would establish stricter rules against hate speech on social networks. If any of these proposed laws come to fruition, they could push the platforms to change their behaviors worldwide.

Millions of workers (roughly one in five) are still out of work in the United States, and they’re about to get desperate. Until the end of July, they were receiving supplementary unemployment benefits (an extra $600 a week) from the federal government as part of the CARES Act that was passed in March. But that provision expired on Friday, and efforts to extend or replace parts of it stalled in Washington this past week when President Trump put the kibosh on negotiations for a broad relief package. (His chief of staff summed things up: “We’re nowhere near a deal.”) Lawmakers are now scrambling to find a quick Band-Aid, like another round of direct payments to Americans, many of whom are facing the threat of eviction.

Where Are the Jobs?

The July employment report comes out this Friday, and analysts are split on where things stand. Most economists expect the numbers to show another increase in payrolls for the third consecutive month (good!), but say that it will be modest — after all, several big states have paused and even reversed their reopenings as the number of virus cases increases (bad). Others think payrolls may have even declined. One thing we do know for sure: The number of new jobless claims is on the rise again for the second week in a row, which doesn’t paint a promising picture.