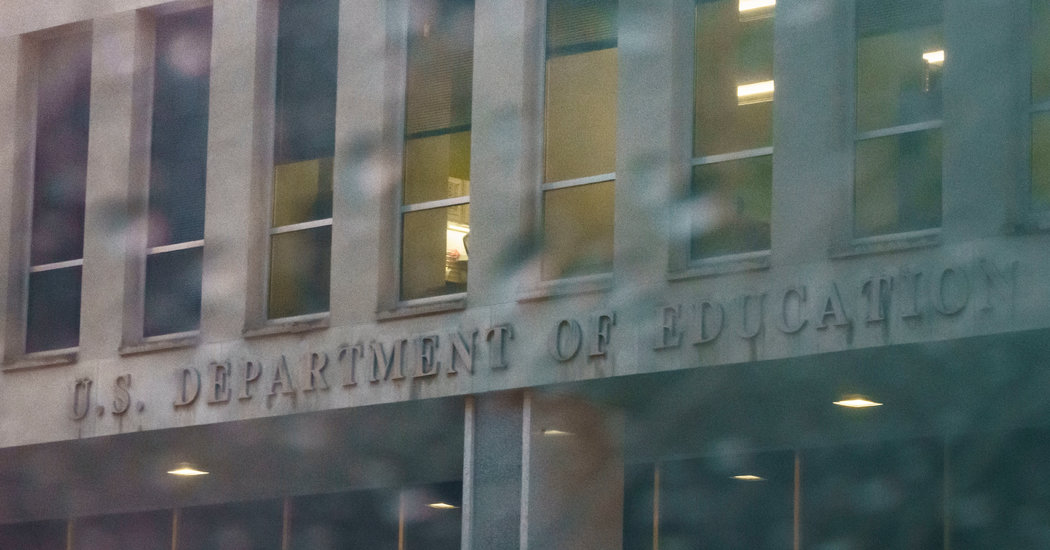 In the deluge of complaints about a troubled program that pays off student loans for people who work in public service, one stands out for its frequency: Thousands of people say they were misled by loan servicers working on the U.S. government’s behalf.

It is among the most vexing problems with a program that has become a notorious quagmire, with a rejection rate of nearly 99 percent. Lawmakers, consumer advocates and desperate public servants say the Education Department should create a formal process to appeal denials, especially rejections that borrowers say were affected by mistakes made by servicers.

But it turns out the Education Department already has a system for investigating complaints and making fixes — it just keeps it very quiet.

At a training conference for financial aid professionals in December, a program specialist at the Education Department said during a presentation that if the agency finds out that it or the servicers it hires “did something wrong,” it will “hold the borrower harmless as a result.”

Those who think they have been harmed by a servicer’s error should file a complaint explaining what happened through the Federal Student Aid office’s feedback system on the StudentAid.gov website, the specialist, Ian Foss, said during his presentation. That routes complaints to the agency’s Ombudsman Group, and the department will then investigate and try to confirm the borrower’s account.

That startled many in the room.

“I was legitimately surprised,” said Ryann Liebenthal, a journalist who is writing a book on student debt and asked the question that prompted Mr. Foss’s answer. She had never before heard of the department’s dispute system.

But the agency has investigated hundreds of borrowers’ claims and found that they were given inaccurate advice or otherwise victimized by a servicer’s error, according to agency records and interviews with current and former government officials. After verifying their claims — using any records it could get, including the call recordings that most servicers keep — the department adjusted those borrowers’ accounts using what is known internally as an “override” credit.

Yet few borrowers know about the appeals process — and even government auditors think that’s a problem.

In a report last year, the Government Accountability Office found that “there is no formal process for borrowers who are dissatisfied” to challenge decisions and that the Education Department does not fully inform borrowers about their appeal options, including the Ombudsman Group.

The obscurity is intentional: The Education Department does not prominently advertise the feedback system because the manual investigations are time-consuming, according to three people familiar with the matter.

That frustrates advocates for borrowers.

“The Department of Education has been running a secretive process that helps only a select number of borrowers get back on track when a student loan company has cheated them out of their rights,” said Mike Pierce, the policy director of the Student Borrower Protection Center, an advocacy group. “Companies need to be held accountable, and the department needs a real solution.”

The Education Department is the largest lender for Americans who borrow for higher education, holding $1.3 trillion in debt owed by more than 35 million people. It relies on a handful of companies hired to service its loans and help borrowers navigate through dozens of repayment options.

But problems are rife, according to government audits and lawsuits against the companies, especially with the Public Service Loan Forgiveness program. The program is intended to draw workers to vital but often low-paying professions with a promise to eliminate their student debt after a decade.

Any mistake along the way can set off a cascade of problems — and so far, nearly all of the 109,000 people who have applied to have their loans forgiven have been rejected, according to the department’s latest data. (As of Sept. 30, only 1,139 had succeeded.)

Most of those who were denied misunderstood or had not yet met the program’s requirements. But sometimes servicers made mistakes, like telling borrowers that they’re on the correct plan when they’re not, or advising them not to consolidate loans that did need to be consolidated to become eligible for forgiveness. For example, anyone who borrowed in 2010 or earlier under the department’s Federal Family Education Loan program must consolidate their loan into a new direct loan.

Such “wrong loan” problems are particularly hard to sort out — unless the borrower finds and follows the complaint option.

One successful appeal came from a borrower who said in her complaint that her servicer had told her that payments she made on her Federal Family Education Loan debts would count toward the 120 payments required for the forgiveness program. When the department investigated and verified her claim, it adjusted her account and credited her for the payments on her nonqualifying loan, according to a department official who worked on the case.

The dispute process is not directly described on the websites of the department’s loan servicers — including FedLoan, the sole servicer for the public service program — or on the department’s Public Service Loan Forgiveness information site.

Angela Morabito, a spokeswoman for the Education Department, said the department’s website “tells borrowers exactly what to do” if they think they have a problem with their public service loan forgiveness application: Contact FedLoan. The department’s website “informs them of the opportunity to provide additional information and documentation so that the loan servicer can reconsider its decision,” she said.

But when pressed to explain how that helped borrowers who had problems with other servicers or were the victims of a mistake by FedLoan itself, she cited the little-advertised appeals process.

“If a borrower is unsatisfied with the reconsideration, the borrower also may submit a complaint through the F.S.A. feedback system,” she said.

One frustrated borrower, Jessie Belote, a middle schoolteacher in Michigan, said she had spent nearly two years trying to resolve a complicated problem with FedLoan. (That isn’t uncommon: The company has told many borrowers that they will need to wait months or years to have their complaints investigated.) Every few weeks, she called the company, and on each call she was told to keep waiting.

Then she found an online self-help forum, where other borrowers advised her to file a complaint to the Education Department’s ombudsman. She did that in early November. The next month, FedLoan responded to her and spent hours working through the mistakes on her account. The errors are now, finally, almost resolved, she said — but the process was maddeningly opaque.

“The servicers don’t tell you how to make a complaint to the Education Department,” Ms. Belote said.

In a lawsuit filed last year against FedLoan, New York’s attorney general, Letitia James, blasted the servicer for not telling people who might have been eligible for overrides that the option existed.

“FedLoan does not consistently inform borrowers, even borrowers who complain, of the opportunity to request an appeal,” Ms. James wrote in her complaint. “It is usually only the most persistent borrowers, or those who are able to enlist outside assistance, who even have the opportunity to seek an override.”

Keith New, a spokesman for FedLoan, said the company “cannot comment on specifics of the lawsuit.”

The Education Department said it did not have data on how many times it had used the override process, but details in its annual Federal Student Aid reports provide some hints. Last year, the department investigated 1,520 complaints about public service loan forgiveness problems. It made changes to the borrower’s account in about 500 cases.

Representative Robert C. Scott, who introduced legislation last year to create a standardized appeals process for the public service program, said there was a “disturbing lack of urgency” at the Education Department to help borrowers fix problems.

“Nobody appears to know about the present process,” said Mr. Scott, a Virginia Democrat who chairs the House Education Committee. “You have people who have dedicated their life to public service jobs based on this promise of a discharge after 10 years. They should get the benefits that were promised to them.”