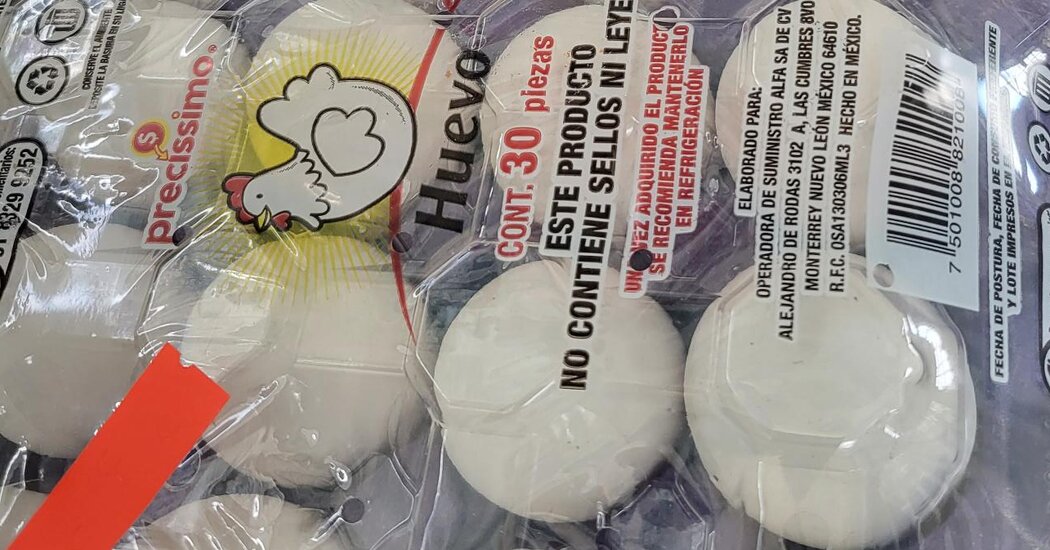 From California to Texas, border agents are increasingly seizing a surprising type of contraband from Mexico: eggs.

U.S. Customs and Border Protection agents had more than 2,000 encounters with people trying to bring eggs into the United States from Mexico between Nov. 1 and Jan. 17, an agency spokesman said. In the same 11-week period a year earlier, there were about 460 such encounters.

The rise comes as the price of eggs in the United States has surged, driven in part by an outbreak of avian influenza, or bird flu, that was detected last February.

Roger Maier, the Customs and Border Protection spokesman, said in an email on Tuesday that the agency had noted an increase in people attempting to bring eggs to the United States from Mexico, where “they are significantly less expensive.”

The 2,002 encounters involving eggs that occurred between Nov. 1 and Jan. 17 were reported by field offices in San Diego; Tucson, Ariz.; Laredo, Texas; and El Paso, and they do not represent the total number of eggs seized.

The biggest increase was in San Diego, where the encounters jumped to 1,077 from 230, an increase of 368 percent.

Mr. Maier did not say how many eggs were seized in these encounters. In an email, he said that “this is not necessarily smuggling but rather increased encounters of people traveling with eggs.”

Customs and Border Protection officials in San Diego and El Paso issued warnings on Twitter last week to remind people that they were not allowed to bring uncooked eggs from Mexico into the United States.

The agency said in a news release that there had been a “large increase” in the volume of prohibited food items, including eggs and raw poultry meat, brought in from Mexico.

This increase in egg contraband coincides with a sharp rise in egg prices in the United States. The average price for a dozen large Grade A eggs rose to $4.25 from $1.92 between January and December 2022, according to the Bureau of Labor Statistics.

At grocery stores in Mexico last week, the wholesale price for a kilogram of eggs, which is more than a dozen jumbo eggs, was between 30 and 51 pesos, or between about $1.59 and $2.71, according to figures collected by the Mexican government.

Avian influenza, which has been cited as a factor behind the sharp rise in egg prices, is a highly contagious virus that is often fatal to chickens. The outbreak has affected more than 58 million birds in hundreds of commercial and backyard flocks, according to the U.S. Department of Agriculture. By the end of 2022, more than 43 million egg-laying hens had died from the disease or had been culled to prevent the virus from spreading, according to the department.

Customs and Border Protection said in a news release that the threat of avian influenza underscored the importance of laws than bar people from bringing agricultural items across the border.

“Reducing the outbreak’s impact is of paramount importance, and preventing the spread, including the prohibition of importing items that may spread the disease from other countries,” the agency said.

These laws are in place because agricultural items, such as plants and animals, can harbor pests and spread diseases that harm the environment, crops and livestock.

People entering the United States are required to declare to officials if they have items including meat, fruit, vegetables, animals and seeds in their luggage or vehicle. If border officers find these types of items, and they have not been declared, travelers can face civil penalties of up to $1,000. The fines are much higher if the items are found to be intended for commercial use.

Mr. Maier, the Customs and Border Protection spokesman, urged travelers to declare food and agricultural items, even those they believe are allowed, to avoid potential penalties.

People who declare that they have crossed the border with eggs “can abandon the product without consequence,” Mr. Maier said. Customs and Border Protection agricultural specialists collect and destroy the eggs, he said.

Mr. Maier said that in a “very small number of cases in the last week or so,” eggs were not declared and discovered during an inspection. The people implicated in those cases were issued a $300 civil penalty, he said. Fines can be higher for repeat offenders or for those who bring in eggs to sell commercially, he said.