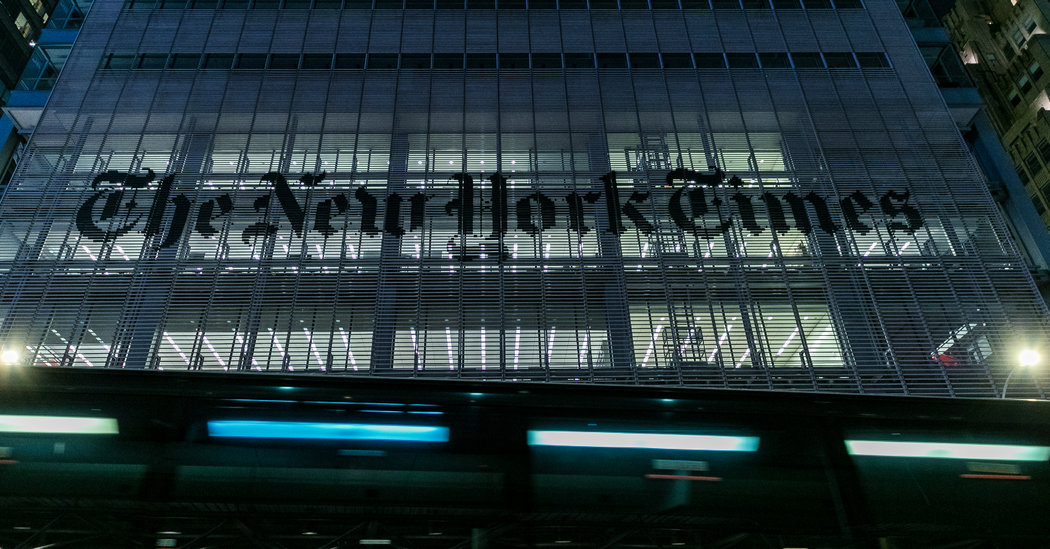 The New York Times said on Monday that it was exiting its partnership with Apple News, as news organizations struggle to compete with large tech companies for readers’ attention and dollars.

Starting on Monday, Times stories were no longer appearing alongside other publications’ articles in the curated Apple News feed available on Apple devices.

The Times is one of the first media organizations to pull out of Apple News. The Times, which has made adding new subscribers a key business goal, said that Apple had given it little in the way of direct relationships with readers and little control over the business. It said it hoped to instead drive readers directly to its own website and mobile app so that it could “fund quality journalism.”

“Core to a healthy model between The Times and the platforms is a direct path for sending those readers back into our environments, where we control the presentation of our report, the relationships with our readers, and the nature of our business rules,” Meredith Kopit Levien, chief operating officer, wrote in a memo to employees. “Our relationship with Apple News does not fit within these parameters.”

An Apple spokesman said that The Times “only offered Apple News a few stories a day,” and that the company would continue to provide readers with trusted information from thousands of publishers. “We are also committed to supporting quality journalism through the proven business models of advertising, subscriptions, and commerce,” he said.

The news business has had a complicated relationship with Silicon Valley for decades. Companies like Google and Facebook have decimated newspaper advertising sales and disintermediated news sites by positioning their own platforms as one of the main ways that people can consume news.

Yet when Apple created a news app in late 2015, promising to work with publishers to help them build a business, many news executives were cautiously optimistic.

Unlike other tech companies, Apple didn’t compete with news sites for ad dollars. And Apple adopted an approach that was antithetical to how its Silicon Valley peers handled the headlines: It only allowed mainstream news organizations in the app, and humans, not algorithms, ranked the top stories.

Apple’s aggressive promotion of Apple News on iPhones has given it an audience of roughly 125 million monthly readers, making the app one of the world’s most widely read news sources. But advertising in the app has generated little revenue for news organizations. For any subscriptions sold in the app, Apple also takes a 30 percent cut.

Last year, Apple introduced a new way for publishers to make money: Apple News+, a subscription service inside its news app that offers access to hundreds of publications, which typically have digital paywalls, for $9.99 a month.

Apple told publishers that the service would deliver customers they wouldn’t otherwise get. But many publications would be undercutting their own prices, and they would have to share half of the Apple News+ revenues with dozens of other news organizations. Apple took the other half for itself.

Still, many publishers took the gamble, including The Wall Street Journal, The Los Angeles Times and Condé Nast, which publishes The New Yorker, Vanity Fair and Wired. Months after its debut, many publishers were underwhelmed by the sales, according to Digiday, a digital media news site.

Executives at The Times passed on Apple News+ and later reduced the number of articles it supplied to Apple News. In an interview with Reuters last year, Mark Thompson, The Times’ chief executive, warned other news organizations about the risks of partnering with Apple.

“We tend to be quite leery about the idea of almost habituating people to find our journalism somewhere else,” he said.

The Times said last month that its total subscribers had topped 6 million. Revenue has been rising from digital subscriptions, even as the company grapples with an advertising downturn brought on by the coronavirus pandemic.

The Times has long had a complex relationship with the large tech companies. It has experimented working with Facebook, including on an effort called Instant Articles several years ago.

But The Times stopped producing Instant Articles for the social network in 2017, saying it wasn’t getting enough revenue. Now Facebook pays The Times to feature its stories in the news tab on Facebook’s app, the company’s latest effort to partner with the news industry. Times stories also appear in Google News, which sends readers to publishers’ websites, unlike Apple News, which generally keeps readers on Apple’s app.

In her note to employees, Ms. Levien said exiting the partnership with Apple News was not expected to have “a material impact” to The Times’ business and that the company would work with Apple in other ways, including on apps, podcasts and hardware.