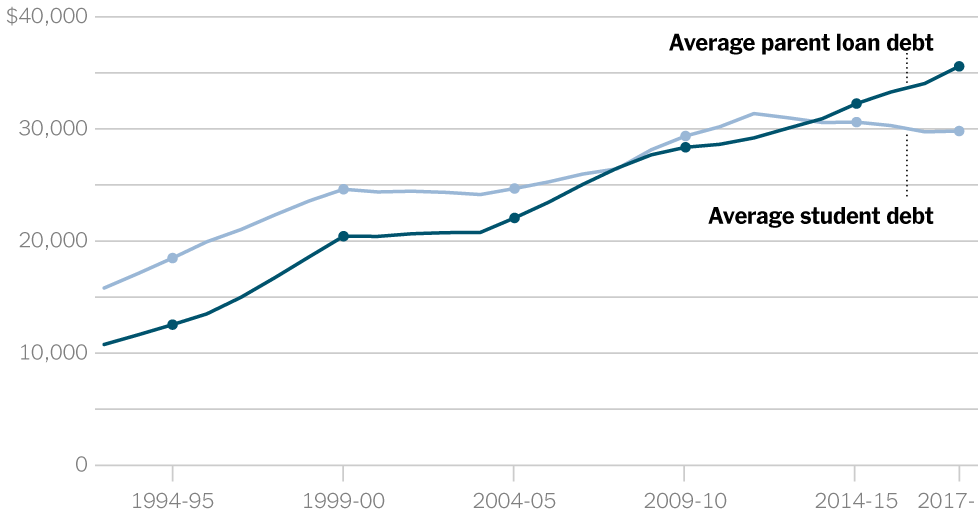 More It’s a sign of the times: A new game show, “Paid Off,” debuted on Tuesday offering winners not dream vacations or new cars, but a pile of cash to help lessen the crushing weight of their student debt.

The reach of America’s student loan problem — total debt is now about $1.4 trillion — is vast. Millions of people are in default, and many young people are graduating into adulthood facing payments that limit their ability to buy homes and to start families of their own. Some employers have even begun dangling student loan repayment benefits as a perk to potential workers.

A new analysis of federal loan data indicates that the average student’s debt load is plateauing, and perhaps even declining slightly, at least when adjusted for inflation. That should be welcome news, except that it comes with a major asterisk: College has not become more affordable, but more students seeking bachelor’s degrees, especially at higher-cost colleges, have borrowed as much as they can under the federal loan program.

As a result, the analysis suggests, many parents are going deeper into debt to pay for their children’s education.

For students receiving bachelor’s degrees, the average debt load at graduation was $30,301 in 2015-2016, about the same as estimates for the previous three years, according to the analysis, which is based on data from the National Postsecondary Student Aid Study. The federal Department of Education’s National Center for Education Statistics conducts the study every four years.

Mark Kantrowitz, the publisher and vice president of research at SavingForCollege.com, ran the numbers. He believes the explanation for the flattening is that many students simply cannot borrow any more money through the federal loan program.

But some students — those whose parents cannot get federal parental loans, called PLUS loans — have a higher cap on how much they can borrow. (They can borrow up to $57,500, the same limit used for independent students.)

“Parents are a pressure-relief valve for when students hit the Stafford loan limits,” Mr. Kantrowitz said, referring to the federal loan program.

Among PLUS loan borrowers in 2015-2016, roughly two-thirds were taking loans on behalf of students pursuing bachelor’s degrees who had reached their loan limit in their senior year, Mr. Kantrowitz said.

In a further wrinkle, although parental debt loads have risen significantly, the number of parents taking out federal PLUS loans declined by about 10 percent from 2011-2012 to 2015-2016.

“It may be that we are in an economic recovery and as the stock market improves, fewer parents are borrowing and don’t need to borrow,” Mr. Kantrowitz said. “But those who borrow need to borrow more because the cost of college continues to rise,” he said, adding they were also picking up the slack for children who were unable to take out more federal loans.

The data also shows more students opting for lower-cost public colleges. That seems like a practical move. But, Mr. Kantrowitz said, it suggests that families are feeling financially squeezed.

“Parents are realizing they just can’t afford that more expensive college,” he said. “The shift from private to public is of concern mainly because it is a sign of financial pressure, a kind of canary in the coal mine,” he added.

More problematic is separate data that shows low- and middle-income students enrolling in associate degree and certificate programs instead of bachelor’s degree programs. That, Mr. Kantrowitz said, is “of greater concern because students who could benefit from a bachelor’s degree are scaling back their educational attainment for no reason other than college affordability.”