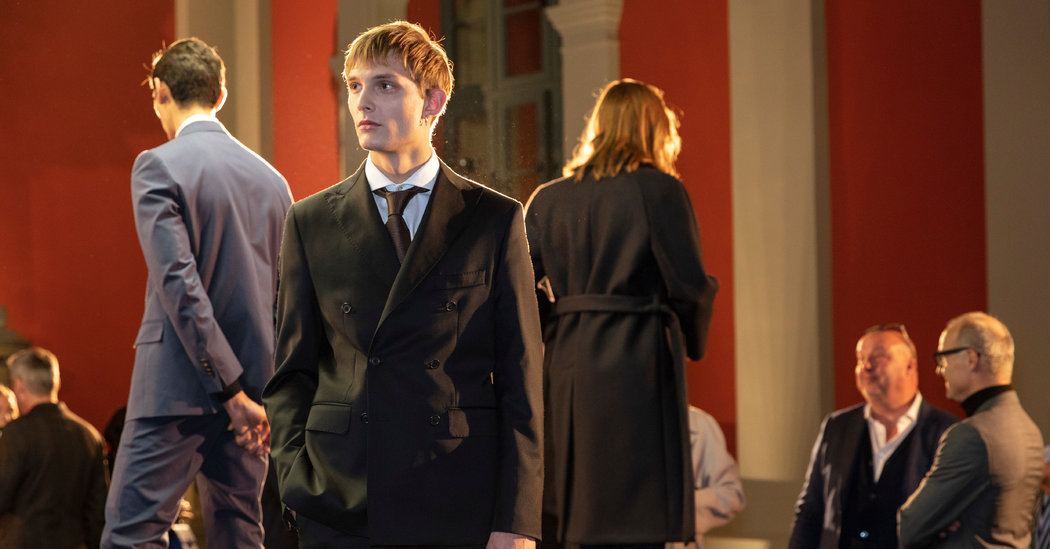 Last month, Andreas Valentin, a 66-year-old professor at the State University of Rio de Janeiro, traveled more than 6,000 miles from Brazil to Berlin to participate in a restitution ceremony, of sorts.

He was the guest of honor at the unveiling of a … well, not new, exactly, but renewed fashion brand: Manheimer, founded by his great-great-grandfather, Valentin Manheimer, in 1840. It was once known as “the king of coats” and famous for creating mass-produced high-end ready-to-wear (or Konfektion) for men and women. Reimagined as a men’s wear brand focused on a kind of plush, minimal suiting, the clothes are now for sale once again.

If you haven’t heard of it, that’s understandable. Manheimer has been defunct since 1929. But once upon a time, around the turn of the 20th century, it was at the center of a German fashion world that rivaled Paris and London in design, production and glamour.

It was, however, a world largely run by Jews. As a result, it largely disappeared during the 1930s, as the Nazi regime destroyed or deracinated Jewish businesses. “In 1933, there were about 2,700 first-class fashion producers in Berlin,” said Uwe Westphal, a former journalist and the author of “Fashion Metropolis Berlin.” “By 1939, there were less than 150.” Other estimates are even lower.

Now one firm hopes to bring back a host of lost brands. Manheimer is among 32 companies founded by Jews, including the watchmaker F. L. Löbner, the luggage maker M. Würzt & Söhne and the cobbler Breitsprecher, that once speckled the streets of Berlin around the area known as the Hausvogteiplatz. Their trademarks have been acquired by Jandorf Holding, with the stated aim of restoring Germany to its rightful place in the realm of personal luxury — and in the process reconnecting the brands to the heirs and bringing them back to their birthrights.

“Germany is known for luxury car brands,” said Lothar Eckstein, one of the Jandorf partners. “Everyone knows Gottlieb Daimler. But no one knows Manheimer was responsible for what became a global industry.”

They have that thing so beloved of the modern branding operation: a story to tell. The question is, can they make anyone hear it?

It is not an easy appeal. No matter how nice the clothes are.

Wiping Out the Past

Mr. Eckstein discovered the story when he moved to Berlin, after having grown up in a small town near Stuttgart. He was running Amazon in Germany and had founded his own independent media company. He realized, he said, “that the luxury industry moving online meant brands are more important, and that means brand history is more important.”

Poking around in the past, he said in a call from Berlin, “if you move here from other parts of Germany you can’t help but notice how drastically visible World War II is even so many decades later. What ultimately triggered the idea of the revival of these brands was while walking across Hausvogteiplatz, the former center of the Jewish garment district.”

Fashion had been one of the largest sectors in Germany at the turn of the 20th century, with goods exported to the Netherlands, Britain, the United States and Brazil. The majority of the companies were owned and staffed by Jews. Two of the largest were Manheimer, which created one of the first systems of reproducing sizes (as opposed to tailoring for each individual), and Hermann Gerson, which clothed the royal court of Prussia.

In the period between the wars, Berlin was the biggest center for luxury mass production in Europe, the city’s streets filled with elegantly clad men and women whose clothes were documented in illustrations for the magazines of the time.

Under German law, once a trademark has been dormant for five years, it can be canceled on request and reacquired. So about 10 years ago Jandorf, which aside from Mr. Eckstein includes Matthias Düwel, a lawyer, and Christian Boros, an advertising guru and art collector, as well as two more partners, began quietly stockpiling names.

Though none of the partners are Jewish, they decided that they would need the buy-ins of the founders’ heirs, so they began tracking down living family members. They got in touch with Mr. Valentin in the summer of 2018.

It sounds straightforward. Yet they are fashion world outsiders, working with brands most people have never heard of, when most luxury brands and their heritage (and myths) have been carefully cultivated and nurtured for more than a century. And they are excavating the transgressions of the past in a country and a city that have latterly become an economic powerhouse of Europe and mecca for contemporary art and clubbing. Though not fashion.

Despite there having been a Berlin Fashion Week since 2007, most famous German fashion designers have left Germany to become famous: Jil Sander showed in Milan. Karl Lagerfeld went to Paris (and Chanel). Even Hugo Boss has been showing in New York.

Stefano Pilati, the former Yves Saint Laurent designer, has moved to Berlin but hasn’t really established a fashion beachhead there. For a long time, when most people heard “German fashion,” the stock response was a joke about sandals and socks.

Mr. Eckstein and his partners not only have to change this perception, they also have to introduce an idea that for most people is entirely new: that Germany has a credible past in luxury fashion.

“The line was broken,” said Margit Mayer, the style editor of Berliner Zeitung and the chief creative of the magazine division of Berliner Verlag. “We don’t have that line that France does and Italy does and England does.”

Rediscovery and Its Discontents

“It’s pretty extraordinary that such a long time after the war, we are still rediscovering this,” Mr. Eckstein said.

Though the Nazi past of companies like Hugo Boss, which in 2011 apologized for using workers from forced labor camps after a book it commissioned revealed that its founder was a loyal party member, and Adidas and Puma, which were created by the brothers Adolf and Rudolf Dassler, likewise members of the Nazi party, has been explored and acknowledged, little focus has been given to the companies that disappeared under the Nazi regime.

Certainly in the potted histories of fashion, the German contribution is rarely mentioned. (Ask fashionistas who invented ready-to-wear, and a likely answer is Yves Saint Laurent — in the 1960s.)

“There was a reluctance to really think about the role of Jews in German culture and society, not least because many of the incumbents were occupying positions that had been formerly held by the victims of racial persecution,” said Harold James, a German economic historian at Princeton University. “The real debate or rediscovery of the German past only started after a generational change, but by that time a great deal of the practical memory of what was lost had vanished.”

In some instances, as with Jewish scientists or artists or musicians, the task of recovering the past is easier because of the presence of books and paintings and recordings, but, he said, “fashion is not as well or clearly documented.”

Ms. Mayer also attributes the oversight to a general cultural prejudice against fashion, which was viewed as less serious, less worthy of study, than, say, philosophy and opera.

There have been efforts to address the gap in the past, both within Germany and beyond, though their seemingly random nature has meant that they have not made much of an impact. Mr. Westphal’s first book on the subject was published in 1992, a time, he said, when stakeholders like the German Fashion Council refused to speak to him.

In 2000, a memorial consisting of three mirrors tilted up against each other like the mirrors you might find in a changing room, was erected in the Hausvogteiplatz to commemorate the Jewish garment workers and shop owners lost during the war. Plaques on the risers of the steps leading from the subway to the street list the names of the businesses that were destroyed.

In 2007, Bloomsbury published a book by Roberta Kremer titled “Broken Threads: The Destruction of the Jewish Fashion Industry in Germany and Austria,” based on an exhibition at the Vancouver Holocaust Education Centre. In 2017, the Georgia Commission on the Holocaust designed a traveling exhibition called “Fashioning a Nation: German Identity and Industry, 1914-1945.”

Yet even when the general outlines of what happened are known, the companies themselves and their contributions to fashion are rarely mentioned. “Ask someone between the ages of 20 and 25 if they know the name Manheimer, and they would have no idea,” Mr. Westphal said.

Indeed, ask someone 40 and up, and you would probably get the same answer, said Markus Ebner, the editor of Achtung, a magazine about German fashion and culture. (He admitted that he had never heard of those companies.) Karla Otto, who grew up in Bonn and runs an international fashion communications empire, also scratched her head.

Jandorf plans to tell the back story of each of its brands, through online histories and events, like the Manheimer unveiling at which Mr. Eckstein interviewed Mr. Valentin onstage. It is following the luxury playbook and talking the luxury talk — going for “timeless style” over trend.

Manheimer is being largely produced in Italy — their signature “Berliner Mantel,” or Berlin coat, however, will be made (duh) in Berlin — with fabrics from Loro Piana, aiming to compete with brands like Caruso and Burberry. Michael Sontag, a young German designer who founded his own women’s line in 2009, is a creative consultant.

Manheimer will be sold directly to consumers online, with prices ranging from 1,000 to 1,500 euros for suits; shirts are around 189 euros, and cashmere coats, 2,500 euros. Jandorf is private, and Mr. Eckstein declined to release specific financial information, but he said the investment was in “the solid seven figures.”

If all goes as planned, Manheimer women’s wear will follow. So will the next brand — a line of crystal called Josephinenhütte, founded in 1842 — by then end of the year.

“Will it bring back the memory, style, classiness they had in the 1920s, or is it just a marketing ploy?” Mr. Westphal asked of Manheimer and its pitch. “I don’t know. But maybe it’s enough to send a signal to the younger generation that this is, at least, part of your history. That it isn’t a blank wall.”

Mr. Ebner thinks the investment could help revitalize the fashion industry in Berlin, which has yet to produce a global breakout name. “Fashion week didn’t get people here,” he said. “Maybe zeroing in on the past of Berlin, and the roots, will do it.”

Maybe it doesn’t matter why the story is told as long as it is told, and the lost fashion brands of Germany are finally given their due.

“Most people don’t realize that during Kristallnacht when the Nazis were burning books, they were also burning clothing and fabrics,” said Mr. Valentin, who is planning to relocate from Brazil to Berlin when he retires from teaching next year to work with Manheimer. “Bringing that back to the light feels very important today.”