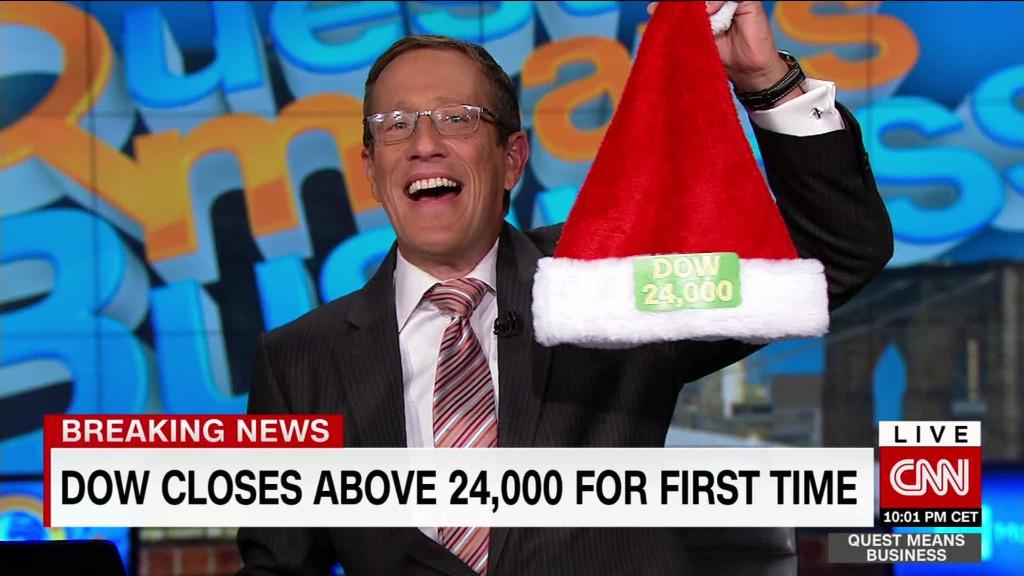 1. Fear — of missing out: Fear can influence the stock market in powerful ways — during booms as well as busts.

Fear is playing a less-obvious role helping to fuel today’s red-hot stock market. In this case, it’s fear of missing out, or FOMO, as Americans watch the stock market smash record after record.

“You’re seeing more people jumping in because they fear they are missing out on the bull market,” said Ed Yardeni, president of Yardeni Research.

Of course, it’s never a good reason to buy something — stocks, bonds or bitcoin — just because everyone else is doing it. Investing should be backed up by solid fundamentals, not irrational emotions.

At its extremes, FOMO can cause real problems. It led many Americans to flip condos in Florida last decade, sparking an epic housing bubble that eventually burst. FOMO also drove the dotcom bubble in the late 1990s on the Nasdaq.

“I remember one of the guys running the newspaper kiosk on Broadway asking me if I can print him stock reports on Intel and Cisco,” said Sam Stovall, chief investment strategist at CFRA Research. “That should have been an signal to me.”

To be sure, today’s stock market looks much healthier than those notorious booms. Profits are at record highs, inflation is low, hiring is steady and economic growth at home and abroad is projected to accelerate. All good reasons for soaring stock prices.

Stovall doesn’t think FOMO has taken over the market, though he’s watching carefully for signs. “Bull markets are like incandescent light bulbs,” Stovall said, “they tend to glow brightest just before they go out.”

On the other hand, Yardeni does see evidence of FOMO in the rush of money pouring into ETFs. He worries it’s a sign the market is in the early stages of a “melt-up” — a dangerous market rise that often ends in tears.

Yardeni has set an ambitious S&P 500 target for the end of next year of 3,100, or roughly 17% above current levels. If anything, he worries the soaring market could eclipse that level long before it’s warranted.

“If we get there in the next three to six months, then we’d be in a melt-up for sure,” Yardeni said.

Related: Most Americans aren’t benefiting from the stock market boom

2. Yellen’s goodbye: Federal Reserve Chair Janet Yellen will hold what’s likely to be her last press conference on Wednesday after policy makers conclude their final two-day meeting of the year. It seems all but certain the central bank will decide to raise its key interest rate one last time.

Under Yellen, the Fed has moved at a slow, deliberate pace in lifting rates as it has kept an eye on inflation, which has been stubbornly low. The Fed raised rates twice this year, first in March and again in June. The current rate — between 1% and 1.25% — is low compared to prior decades.

Wall Street does not expect Jerome Powell, Trump’s nominee to lead the Fed, to stray far from Yellen’s approach when it comes to setting monetary policy. But if the new tax plan jump-starts the economy, Powell may steer the Fed to raise rates faster to keep up with the pace of inflation.

3. Bitcoin futures debut on Chicago exchange: The Chicago Board Options Exchange, or CBOE, plans to launch bitcoin futures trading on Sunday at 6 p.m. ET. CME (CME), the derivatives marketplace, has said it will start trading bitcoin futures the following Sunday.

It’s been a volatile week for the cryptocurrency. Bitcoin surged above $17,000 for the first time on Thursday — and plunged by more than $3,000 on Friday.

The bitcoin frenzy has ramped up, partially in anticipation of the start of futures trading on the CBOE, CME and other exchanges. But big banks have warned that bitcoin futures trading could be dangerous.

4. Net neutrality decision: The Federal Communications Commission is scheduled to vote on the repeal of Obama-era net neutrality protections on Thursday, despite calls from Democrats to delay the vote.

Currently, net neutrality rules bar internet providers like Comcast (CMCSA) and AT&T (T) from deliberately speeding up or slowing down traffic from specific websites and apps, and prevents them from prioritizing their own content or the content of third-party services they strike deals with. FCC chairman Ajit Pai’s plan would lift those bans — and likely boost those companies. (AT&T is in the process of acquiring Time Warner, which owns CNN.)

Pai argues that the current laws micromanage internet providers, and that increased transparency will protect consumers. Critics worry that fewer regulations would let internet providers offer preferential treatment to companies that are willing to pay more.

5. Black Friday results: The Census Bureau will reveal its estimates for November’s retail sales on Thursday.

The numbers will reveal how well retailers performed during the Black Friday shopping period. Early estimates from ShopperTrak, a data analytics company that measures the number of shoppers at stores, said foot traffic was similar to last year. Friday will show if shoppers spent about the same as they did in 2016 as well.