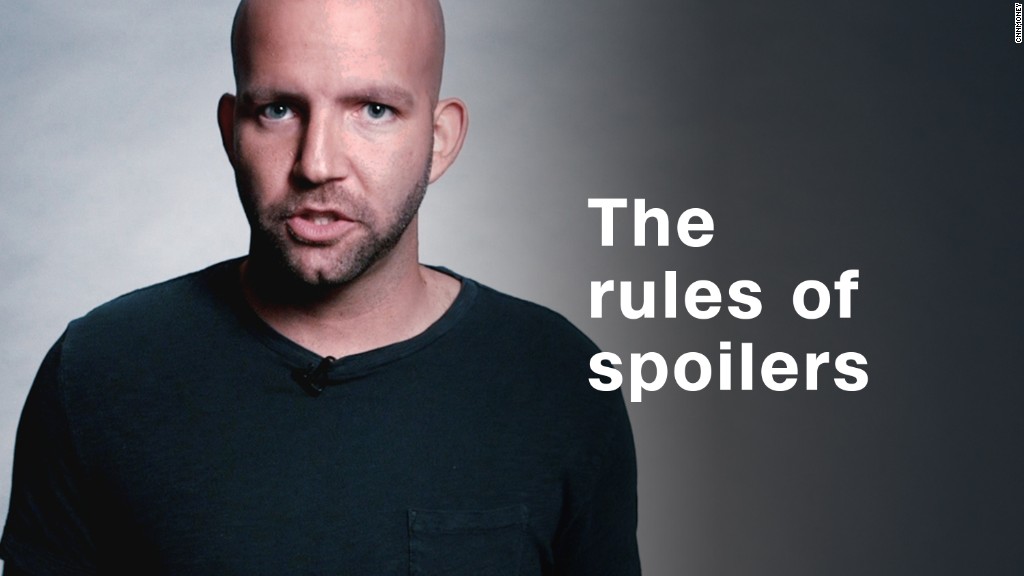 The season finale of HBO’s “Game of Thrones” is Sunday night, and it should have its fair share of changing alliances and shocking deaths. For fans who opt to watch the episode on delay, the internet becomes a minefield of spoilers inspired by the plot twists and surprising revelations.

Spoilers have become a large part of pop culture thanks to the immediacy of social media, coupled with TV shows and movies with twists and turns that keep viewers talking well into the next day.

But what are the rules when it comes to spoilers? Is it okay to even talk about them, and if so when?

Everyone has a different answer for the proper wait time before revealing major plot points, said Matt Zoller Seitz, a TV critic for New York Magazine and editor in chief of RogerEbert.com.

“And no matter what niceties you try to observe, you’re always going to end up offending somebody,” Seitz told CNN. “And each time I do it, I have this period of retrenchment where I ask what did I do wrong? What can I do better in the future? And the answer is, I don’t know.”

Seitz has written about so-called “spoiler etiquette” and made the point that there are varying levels of wait time a viewer can employ for different forms of media.

If you’re watching a movie, Seitz says you should wait a week before spilling secrets on social media. As for weekly episodic television, he says wait 48 hours before tweeting. And a full season drop on Netflix? Four days.

Related: The game of ‘Thrones’: How resembling live sports makes the HBO hit an event

Plot twist have been part of the pop culture experience for decades — from 1968’s “Planet of the Apes” to the father of all spoilers in 1980’s “Empire Strikes Back.” In the past, you only had to avoid the water cooler at the office to avoid hearing co-workers talk about them. In the age of social media, however, you run the risk of tripping over episode recaps and fan theories that will spoil your delayed viewing experience.

“I wish that the world were different now and that I wasn’t about to say what I’m going to say, but I feel like it’s every man and woman for themselves at this point,” Chris Ryan, executive editor at The Ringer, told CNN. “I think five years ago even you could be the person in the room who was like ‘I haven’t watched it yet.’ Then people would respect that. Now, I feel like it doesn’t really happen that way.”

And even though spoilers can ruin the plot for others, one in five Americans say there’s nothing wrong with sharing TV spoilers as soon as they are revealed, according to a Harris Interactive poll conducted for Netflix in 2014.

So, with spoilers coming at us at a rapid-fire pace from all angles, how does that impact the art we’re watching?

“What we’re losing in that is that why things happen is ultimately more satisfying than what happens,” Seitz said.

So, in other words, it’s really up to you if you let spoilers ruin your fun, but what may matter more is not who survives “Game of Thrones” on Sunday night, but rather how they did so.