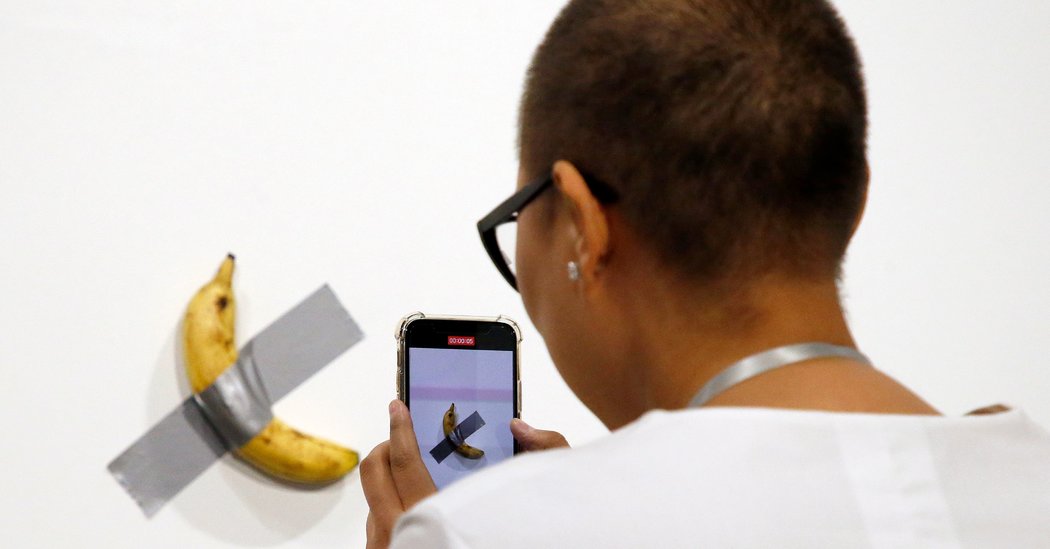 And two additional artist proofs are going to museums.

Needless to say, the bananas have prompted the very buzz that Mr. Cattelan has long been a master at generating (his golden toilet — recently stolen — being only the most immediate example).

Emmanuel Perrotin, the founder of the gallery that represents Mr. Cattelan (Galerie Perrotin), said the flurry over the artwork “was totally unexpected.”

Soon after his booth at the Miami art fair opened to V.I.P.’s on Wednesday, Mr. Perrotin said the gallery installed a GoPro camera in the booth to capture people’s reactions. “You have a work like the ‘Mona Lisa,” where everybody is coming to look at it, to take photos with it, to discuss it,” he said.

But is this a groundbreaking work, an expensive inside joke or perhaps Exhibit A in a display of income inequality?

“Cattelan is the Anti-Warhol,” said the art critic Robert Storr. “Andy insisted that the Coke you and I buy was democratic in that it cost us the same as it did Nelson Rockefeller. But obviously Maurizio has grasped that the rich will pay much, much more for a bespoke banana — bruises and all. Let ‘them’ eat $120,000-a-slice banana bread.”

While acknowledging that #cattelan was now a popular hashtag on Twitter — with people posting images of all sorts of items taped to the wall (a croissant, a lemon, Nutella) — Mr. Perrotin stood by the seriousness of the artist, with whom he has worked for 27 years. “Maurizio is a pure genius,” he said. “I see the magic happening on different occasions.”

“Maurizio’s work is not just about objects, but about how objects move through the world,” he added. “Whether affixed to the wall of an art fair booth or displayed on the cover of The New York Post, Maurizio forces us to question how value is placed on material goods. The spectacle, which has been orchestrated so beautifully, is as much a part of the work as the banana.”

Mr. Perrotin likened the artwork to Yves Klein’s “The Specialization of Sensibility in the Raw Material State into Stabilized Pictorial Sensibility, The Void,” in which the French artist sold empty space.

Mr. Cattelan first conceived of the work as a sculpture shaped like a banana, the gallery said, and brought a banana with him when he traveled, hanging it in his hotel room “to find inspiration.” He tested several materials — resin, bronze and painted bronze — before deciding on using a real banana.

The work is aptly titled, “Comedian,” and Mr. Perrotin said that it was the first new art that Mr. Cattelan has presented at a fair in more than 15 years.

As an artist, Mr. Cattelan has continually kept the art world guessing. After his major 2011 retrospective at the Guggenheim, he announced that he was officially retiring from making art. But then he came back with the toilet in 2016.

As to the lineage of the bananas themselves, they bear no special provenance. “My assistant bought it at a Miami grocery store,” Mr. Perrotin said of the one on display in his booth.

Still unclear is what owners of the work will do when their bananas rot.

“What is the big deal about changing the banana regularly?” Mr. Perrotin said. “Everybody changes flowers regularly.”

A certificate that accompanies the work includes a manual for installation, a spokeswoman said, adding that, “Maurizio’s instructions are intentionally imprecise.”

And to those who question whether a banana taped to the wall constitutes art worthy of $120,000? “All artwork costs a lot of money,” Mr. Perrotin said. “They buy an idea, they buy a certificate.”

The purchase, Mr. Perrotin added, is part of the artwork. “If nobody buys it, nothing will happen,” he said. “The fact that somebody buys it makes the piece.”

One of the bananas was bought by Sarah Andelman, a founder of the Paris concept store Colette, which recently closed; it was her first major art purchase. “I knew it was going to be a phenomenon,” Ms. Andelman said in a telephone interview from Paris, “this banana on the wall.”

She said her husband, as a joke, had taped a banana to her desk when she returned from the fair. “I thought, ‘Wow, that was a fast delivery,’” Ms. Andelman quipped.

But humor aside, Ms. Andelman said she had no buyer’s remorse, having long admired Mr. Cattelan’s work. She plans to hang the certificate accompanying the banana in her office, if not perhaps the banana itself.

“It really reflects our time,” Ms. Andelman said, “the absurdity of everything.”