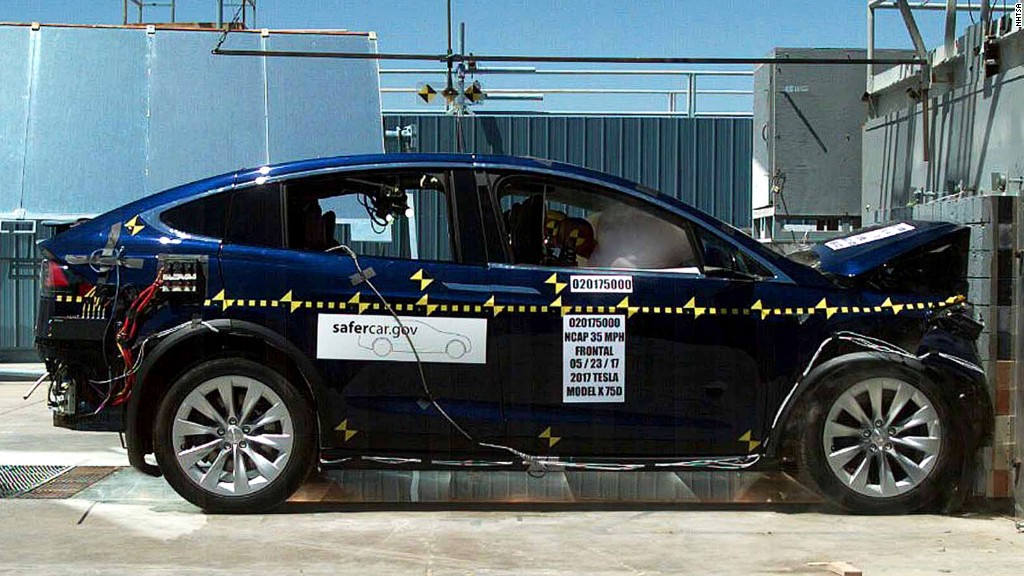 Can anything stop Tesla? Shares of Elon Musk’s electric car company are up an astonishing 75% so far this year.

In fact, there are only three automakers on the planet with a higher market value than Tesla — Toyota (TM), Daimler (DDAIF) and Volkswagen (VLKAF).

The surge in Tesla’s stock has made Musk, who is also the CEO of privately-held rocket company SpaceX, one of the world’s richest people too. Musk is worth more than $17 billion, according to wealth tracking lists from Forbes and Bloomberg.

But there is a battle brewing between investors who think that Tesla stock can continue to charge (sorry) higher and those who are betting that Tesla, which is expected to continue bleeding red ink this year and in 2018, is an electric bubble about to burst.

Most analysts have a favorable view of Tesla. An analyst at German investment bank Berenberg upgraded the stock earlier this week to a buy rating, citing a “near monopolistic” chance to be the undisputed leader in electric vehicles.

The Berenberg analyst lifted his price target to $464 a share. That’s nearly 25% above Tesla’s current stock price and is the highest price target for Tesla on Wall Street.

Yet even that pales in comparison to how high one fund manager believes the stock can go. Money manager Ron Baron, a big Tesla bull who owns the stock, told CNBC on Tuesday that he thinks Tesla shares could hit $1,000 by 2020.

That would be a gain of nearly 170%. And at that quadruple-digit price, Tesla’s market value would be about $165 billion.

Sales are growing rapidly as the company continues to impress consumers (and regulators) with its Model S sedan and Model X SUV. There are also high hopes for the upcoming Model 3, which will be Tesla’s more affordable car.

Related: Tesla’s Model X is the safest SUV ever tested

Musk is moving beyond the auto market as well. Tesla’s acquisition of SolarCity, a company founded by two of Musk’s cousins, gives Tesla the opportunity to take advantage of growing demand for solar roofs and batteries for homes and businesses.

But the meteoric rise of Tesla has also attracted a lot of skeptics. Short sellers, who borrow a stock and immediately sell it with the hopes of buying it back later at a lower price and pocketing the difference, are ganging up on Tesla.

According to data from financial analytics firm S3 Partners, Tesla is the second-most heavily shorted stock on the market right now, trailing only Chinese e-commerce giant Alibaba and just ahead of Apple.

Still, the fact that so many investors are betting against Tesla is also a reason why the stock could keep climbing.

Short sellers have to eventually repurchase, or cover, their positions. If a stock moves higher and higher, the shorts face mounting losses. For example, if you borrow a stock trading at $300, sell it and then the stock quickly goes to $400, you’re out $100.

Musk even poked fun at the investors who think Tesla is destined to fall. After a big pop in the stock in early April, Musk tweeted that there was “stormy weather in Shortville.”

Musk may be having the last laugh for now. But there will be a lot of pressure on the company when it reports its second quarter results in early August to show investors that the stock’s Ludicrous Mode runup is justified.