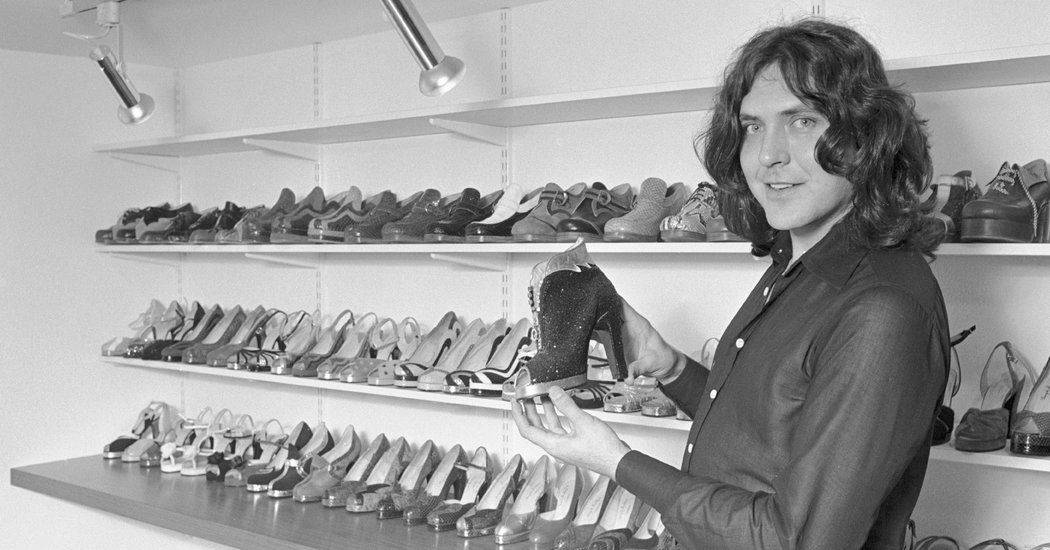 If you wanted style and edge in your footwear in the 1970s, Terry de Havilland was your go-to designer. He offered gravity-defying wedges with metallic accents. Also bondage boots. Even winkle-pickers. They came in his favored psychedelic colors, inspired by his frequent LSD trips.

Mr. de Havilland, a noted party boy and cobbler to the stars, died on Nov. 27 in London at 81.

His death was announced on his website. The cause was not specified.

“I designed most of my shoes on acid, and the opening party for my shop in the King’s Road was famous for the three Cs — champagne, cocaine and caviar,” Mr. de Havilland wrote in The Guardian in 2006. “God knows who was there — everybody.”

His shop, Cobblers to the World, with its mirrored walls and purple velvet banquettes, opened in 1972 and became party central. His designs ran from acid green to peach. His cowgirl boots featured glittering stilettos. His clientele included the Beatles and Elton John. He became known as “the rock ’n’ roll cobbler.”

He often didn’t know who was in his shop. “I was usually doing drugs out back,” he once said. He was also pouring milk into shoe samples to feed stray cats.

In those early days, his first wife, Sandy Conlin, left him for a woman. She later turned to hard drugs and died of an overdose.

The shop flew high for years, but in the 1980s and ’90s Mr. de Havilland fell into a business slump and slipped off the fashion pages. So completely had he vanished, according to The Telegraph, that Cher assumed he had shuffled off his mortal coil — until she ran into him one day in 1995. She had gone to his factory looking for shoes for herself and her friend Bette Midler when she spotted him.

“My God,” she told him. “Me and Bette used to buy your shoes in Paris — we assumed you were French, gay and dead.”

In Mr. de Havilland’s version of that story, in The Guardian, Cher was wearing “a daggy old tracksuit,” and after crying out “I thought you were dead!” she told him that she and Ms. Midler “were down to sharing their last pair of de Havilland shoes.” He said she bought 13 pairs on the spot “to tide her over.”

Mr. de Havilland said he always loved women, and he fathered three sons with three different ones. His only criterion for them seemed to be that they have small feet, what he called “sample size,” preferably Size 5. “Couldn’t have lived with them otherwise,” he wrote.

No doubt his sky-high heels could be difficult to wear. But Mr. de Havilland took care that they not impede his clientele, whether it was Beyoncé, Amy Winehouse or Madonna, from dancing or otherwise performing. And no one complained.

“The effect on the wearer’s confidence, to his mind, far outweighed any discomfort,” The Telegraph said in its obituary, “and when questioned about his heels he insisted: ‘I think they empower women. They give you your own little stage to stand on.’”

He was born Terrence Higgins in London’s East End on March 21, 1938, and grew up there. During the war, his cobbler parents made black-market shoes from scavenged scraps for showgirls. By the time he was 5, Terry was hammering in dowels for their three-tier wedges.

He married Ms. Conlin when she became pregnant. In the late 1950s, they went to Rome to see if he could break into acting, but that didn’t work out and he returned to London to immerse himself in his parents’ shoe business. He thought the surname Higgins insufficiently glamorous; Sandy reached for a phone book and picked out the name de Havilland.

He first came to public attention in 1964, when, during a photo shoot in London, someone spotted the shoes he had designed for his girlfriend, the model Perin Lewis. A feature in the fashion magazine Queen followed and made those shoes an instant must-have.

He was soon attracting celebrities. Both Ms. Midler and Bianca Jagger would showcase his distinctive snakeskin three-tiered wedges.

In 1970 his father was accidentally electrocuted by some machinery in his shoe factory. He died in his son’s arms, The Telegraph said, and control of the business passed to Terry.

It was successful for a time. He created Tim Curry’s shoes for his role as Dr. Frank-N-Furter in “The Rocky Horror Picture Show” (1975). But shoe fashion was fickle, and in 1979 his shop was liquidated.

While many of his creations were hits, the market kept shifting and his business was uneven for the next several years. Finding it difficult to compete in the global marketplace, he was forced into liquidation again, in 1999, and in 2001 he suffered a minor heart attack.

In time, the ’70s styles that had originally made him popular made a comeback. He received a burst of welcome publicity after the BBC broadcast a documentary, “Trouble at the Top” (2004), about his spat with Prada’s Miu Miu label. The designer had copied one of his metallic platform creations (Prada called it a “homage,” and it appeared in an episode of “Sex and the City”) but eventually paid him a settlement.

He started new labels, and by 2013, when his signature Margaux shoe, a five-inch wedge, turned 40, it was once again all the rage.

At least one pair of his ’70s snakeskin leather platforms in iridescent metallic colors went into the fashion collection at the Victoria and Albert Museum. In 2010 he received the Drapers Footwear Lifetime Achievement Award, bestowed by the British Footwear Association, for his half-century in the industry.

In an interview with Drapers.com, he said that Queen Elizabeth II and the pope (he did not specify which one) had both considered having him design custom shoes for them, but that they both pulled out at the last minute — probably, he said, “because they Googled me.”