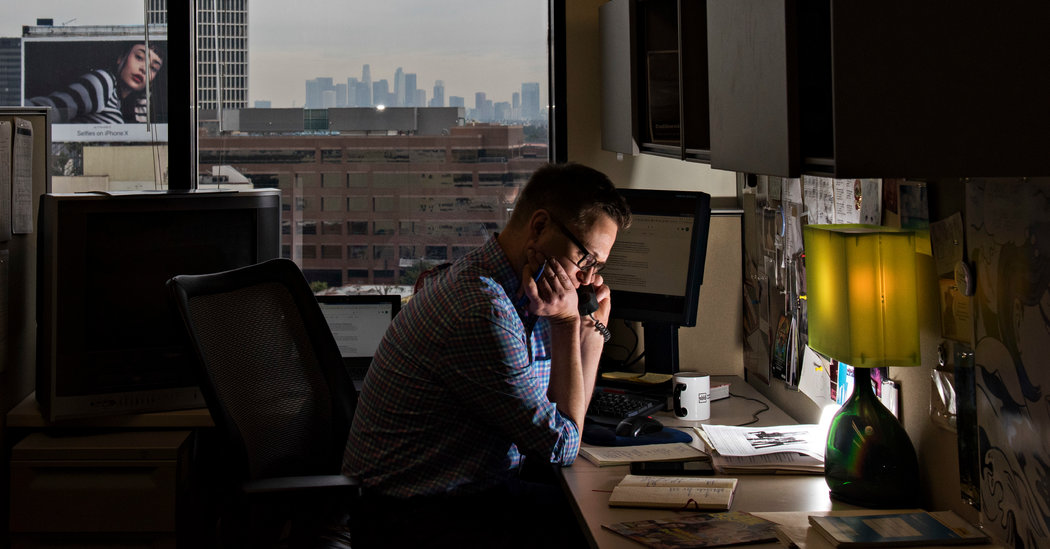 How do New York Times journalists use technology in their jobs and in their personal lives? Brooks Barnes, who covers the entertainment industry from Los Angeles, discussed the tech he’s using.

As our Hollywood reporter, what are some of your favorite tech tools for staying on top of your beat?

Confession: When I saw this question, I had a minor panic attack and typed “tech I should be using now” into Google. I’m one of those reporters who still take notes by hand. Appointments are written down in a planner that I haul everywhere. The TVs in my home office and on my desk in the bureau are those 700-pound box models with built-in VCRs, the kind that Goodwill won’t accept anymore. (Sneer all you want. They work just fine.)

But there are a few iPhone apps that I use frequently. One is Feedly, which collects articles from across the web in real time. I started relying on it when Google Reader went kaput in 2013, and I find Feedly easier to use than Twitter when keeping tabs on certain areas of my beat. I cover Disney, for example, and there are tons of obscure theme park blogs. I follow about 40 of them with Feedly, which makes it easy to swipe through dozens of items (headline plus the top of the story) in a few seconds.

The encrypted messaging app Signal is a standard tool for reporters these days. The sexual misconduct scandals that have engulfed Hollywood and the resulting Time’s Up movement have made a lot of people inside entertainment companies willing to be sources as long as they trust that they are communicating in a secure way.

The other app I use a lot is IMDBpro, which is a subscription database with contact information for about 300,000 people in Hollywood. You can’t look up Dwayne Johnson’s mobile number, but you can quickly locate his agent, lawyer and publicist. I don’t know how this is possible, but IMDBpro, which is owned by Amazon, became available as an app only in December.

How have you seen tech change Hollywood in the years that you’ve covered entertainment?

Now companies like Disney are racing to build streaming services as consumers, in particular the younger ones, whom Hollywood cares about most, disconnect their cable subscriptions. Film studios, reeling from the collapse of the DVD business (digital movie sales and rentals are not as lucrative), have had to downsize and rely more on ticket sales, which has made them focus almost entirely on branded “tent-pole” movies that can play globally. Ratings for traditional TV networks have imploded to a once-unthinkable degree, as people spend more time watching videos, playing video games and tending their Instagram, Facebook and Twitter feeds.

One of the biggest and more interesting changes, at least to me, involves institutional arrogance — a deep-seated belief at studios, formed over decades of undisputed dominance, that nobody tells them what to do, including their customers. We will cast whom we want. We will tell the stories we want. And you will buy tickets, even if that means tricking you with marketing that makes something unwatchable look like a masterpiece.

But that era is over. Social networks and sites like Rotten Tomatoes have empowered the masses. And Hollywood is still coming to grips with that. I ran into a studio executive a couple weeks ago who was fuming that she wasn’t able to “cheat” an opening weekend — using marketing to cloak a bad movie — because angry ticket buyers immediately started spreading the word to their friends on Facebook and Snapchat.

In the past few years, movie and TV viewers have talked a lot about racial and gender diversity on social media. There was #OscarsSoWhite, #ThisIs2016 (in response to Asian-American issues) and, of course, #MeToo. Do you think social media has a measurable impact on how Hollywood is addressing diversity?

It’s a cliché because it’s true: In Hollywood, image is everything. The only thing studios care about more than profits is looking bad in public, and these online movements have shamed the industry into taking action — finally — on matters like sexual harassment and diversity. It takes so long to make most movies, though, that the impact is still hard to see. Disney put “Black Panther” on its assembly line in 2014, and it came out last month.

Beyond your job, what tech product are you currently obsessed with using in your daily life?

About two months ago, my partner and I decided to cut the cord. No more cable. Our monthly bill from Spectrum went from nearly $200 a month to less than $70, which is how much they charge for stand-alone internet service. The total comes up to about $120 with subscriptions to streaming services like Netflix, Hulu and HBO Now. (Oh, fine: I also subscribe to CBS AllAccess because I watch “The Young and the Restless.”)

We love it. There is nothing about cable we miss. We have the latest iteration of Apple TV, which magically pulls together shows and movies from across the streaming services we use. Its integration of Siri is fantastic, allowing you to start watching almost anything with a voice command.

And we love to go searching through free services like Pluto TV, which recreates the traditional cable experience with internet channels. Pluto has some well-known news networks like Cheddar and CNBC, but the thrill lies in flipping through one offbeat channel after another — one the other night had just a live stream view of a pond, and another seemed to consist of nothing but videos of buxom women posing next to dirt bikes.

I hate the Hulu interface. It feels counterintuitive to me. And every time we turn it on, “American Dad!” — not something we would ever watch — seems to pop up as a suggested viewing option.

With Netflix, I wish there was an easy way to zap straight back to MyList rather than having to scroll through the whole roster of suggestions every time. (“Because you watched ‘London Spy,’” or whatever.) I have no real complaints about HBO Now except that the series offerings sometimes feel a bit sparse next to Netflix.

The CBS app freezes up the most. Maybe it’s the cosmos telling me that there are better ways to decompress than watching a soap opera? At any rate, I generally solve it by rebooting the Apple box.