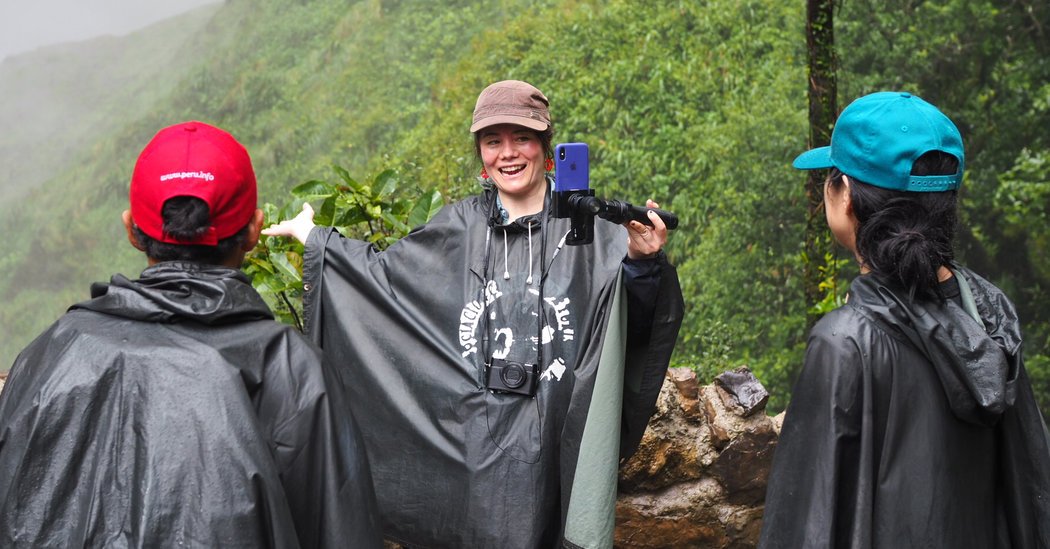 How do New York Times journalists use technology in their jobs and in their personal lives? Jada Yuan, who is crisscrossing the globe as The Times’s 52 Places Traveler, discussed the tech she’s using.

You are endlessly traveling, and you must have to pack light. What are the most crucial tech tools that you pack?

Funny thing is, I’d be traveling much lighter if I weren’t dragging around so much tech!

Because I’m carting all my own stuff and moving every four or five days, I have to think a lot about size and weight. My MacBook Pro and iPhone X are essentials, as are a Bluetooth keyboard (which I hook up to my phone to write articles when I don’t have my computer), a 2TB hard drive, and a USB-C dongle with multiple USB ports and an SD card reader.

I adore my Sony RX100 V point-and-shoot camera, which Todd Heisler, one of The Times’s Pulitzer Prize-winning staff photographers, chose for me. It’s tiny, drop proof (so far!) and especially good in low-light conditions. For video, I don’t go anywhere without a Rode Lavalier (an external microphone for noisy environments) and my DJI Osmo Mobile gimbal, a stabilizer that helps me take really smooth shots on my phone while walking (or riding a horse).

Staying charged is paramount. I can’t risk hiking five hours up a volcano to have my camera die, which happened in Patagonia. I have two or three portable battery chargers on me at all times, plus the appropriate micro-USB and iPhone cables, wall plugs, a portable charger for my camera’s terrible batteries and an Allocacoc Power Cube, which lets me plug in four American-plug devices and two USB cords, plus has interchangeable adapters for any wall outlet I might encounter.

You shoot lots of photo and videos to document your travels. What do you do to stay organized or do quick edits on the road?

I’m new to iPhones — I had a Samsung phone I loved before this trip — and the magic of Airdrop has been a revelation to me. It lets me send photos to my computer and ruthlessly delete them from my phone.

All camera photos are uploaded to my computer and are turned into contact sheets named by place in Photo Mechanic. I can batch caption them, do an edit of my best shots and, most important, see everything I have without needing an internet connection.

For shooting, I toggle between the iPhone camera app and Pro Camera, a paid app with a ton of clutch features, like sound levels when you’re shooting video. The best editing app I’ve found for both photo and video is InShot, which lets you adjust videos to be square or 9:16 (the ratio for Instagram stories).

What apps have been most useful to you for planning trips or finding things to do?

I like to book directly through hotels and airlines, and TripIt has saved me from endlessly searching through my email to find confirmations. You forward emails to the app, and it organizes the information into legs of travel. The app even helps you check into your flights.

As for planning, I work with a researcher at The Times, and we communicate over Google Docs. But I’ve found there isn’t a single tech substitute out there for reading articles or random blogs, or doing a web search on “where to eat in X,” or asking locals where they like to go.

Before I get to a city, I like to take all the recommendations I have and enter them into Google Maps. That way I can strategize my must-sees, but also know where to eat once I finish with that museum.

It’s a tossup between Maps and Evernote for which app I use most. Paper clutter is my constant enemy. To avoid taking brochures, I photograph each one I might want to refer to later and put it into Evernote.

And a VPN, or a virtual private internet network, is a huge help in countries where I don’t know the language. It makes my phone believe I’m still in the States so my web searches come up in English.

Which country has struck you as the most fascinating in terms of how it uses tech? What stood out about it?

So far, I’ve been through only the Americas and a little bit of Europe. What’s been most fascinating is how few people I’ve met seem to care about social media. In New Orleans, my first stop, almost no one I met had an Instagram, and those who did could rarely remember their handles. And that has been repeated in most places I’ve been.

I was impressed by some 20-somethings from Mexico City who had planned their entire Baja Peninsula vacation through YouTube video searches. And I loved that in Oslo all the buses had USB chargers built into the wall. Not all of them worked, but it was the thoughtfulness that counted.

Are there any common tech problems that people seem to experience everywhere?

I expected to have bad cell reception in remote northern Iceland, but in Buffalo I couldn’t call a ride share from outside my hotel — and I have Verizon! In New York State!

Hotel Wi-Fi is notoriously awful worldwide. It’s really important as a traveler to anticipate a lack of connectivity. Print out or take a screen shot of important tickets. Save your maps offline in Google or use Maps.me, a worldwide network of offline maps for your phone.

Outside of the tech for work, what tech product are you currently obsessed with?

The only tech in my life that isn’t for work right now are the Hulu and Netflix apps, which I use to unwind in hotel rooms. Improvement I want: Make 85 more episodes of “Queer Eye” and turn “Set It Up” into a 15-part series, and deliver them to me tomorrow.

Is there an app or a piece of tech that you used at home that you would never use on the road?

This was a surprise to me, but I had to cancel my Amazon Prime on the road. When I’d fret about losing something, people would always say, “You can order it off Amazon!” And you can — if you time it to ship three destinations down the road.

But the real issue is returns. I’d get a shipment and find out it had to be sent back through three different carriers, and I’d have to hunt down extra boxes and pay for return shipping — plus find a shipping place that handled multiple carriers and was open when I could get to it. Instead, I’m having a lot of fun shopping locally.

Podcasts, too, were a big part of my New York City life. But on the road, I’m less willing to take the safety risk of putting in earbuds on public transit. And I don’t want to. Being on this trip is a once-in-a-lifetime opportunity, and I want to be tuned in as much as I can.