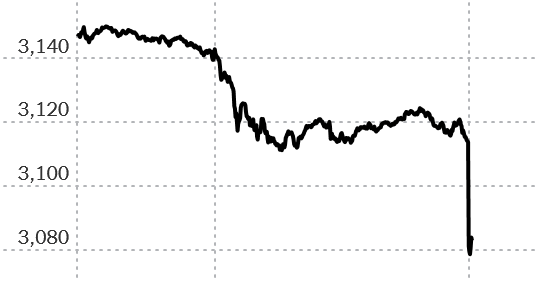 Stocks fell around the world on Tuesday amid renewed pessimism about the global trade war.

Speaking in London, where he is attending a NATO summit, President Trump appeared to downplay the chances for a deal to end the trade dispute with China before 2020. Asked about his previous goal of reaching an agreement by years’ end, Mr. Trump told reporters, “I have no deadline, no.”

Mr. Trump also suggested that the United States will follow through on a threat to tariff French imports in retaliation for a digital tax the European nation recently implemented, which impacts some of the largest American tech companies.

Investors have been hoping that the world’s two biggest economies can make progress toward at least staving off new tariffs scheduled for Dec. 15 on $160 billion worth of Chinese products, including smartphones and laptops. Negotiations on ending the longstanding trade war could face a tougher path this month following the flare-up over Hong Kong.

“Perhaps the market will now hold the champagne corks that it has been popping for months now in expectation that all is well,” Rabobank said in a report.

The Trump administration has also proposed tariffs on $2.4 billion in goods in retaliation for a French tax on global tech giants including Google, Amazon and Facebook.

France’s finance minister threatened a “strong European riposte” if the United States follows through on a proposal to hit French cheese, Champagne, handbags and other products with tariffs of up to 100 percent.

The move is likely to increase tensions between the United States and Europe — and set the stage for a likely tense meeting Tuesday between President Donald Trump and French President Emmanuel Macron.

In Asia, tensions had already flared after China retaliated for American support of protesters in Hong Kong, putting investors in a selling mood. Asian regional markets are generally hurt by declines in trade and the slowdown in the Chinese economy that might cause.